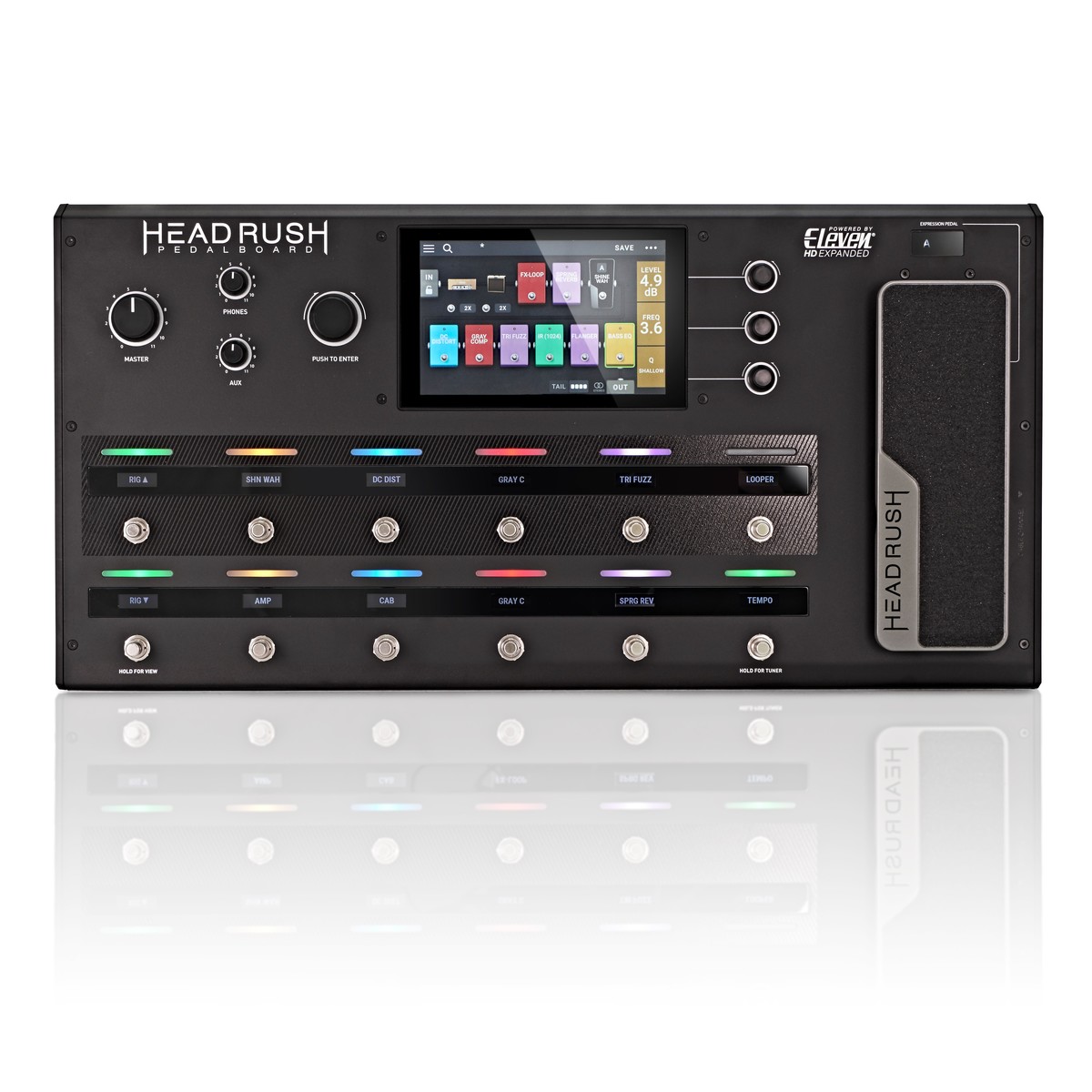 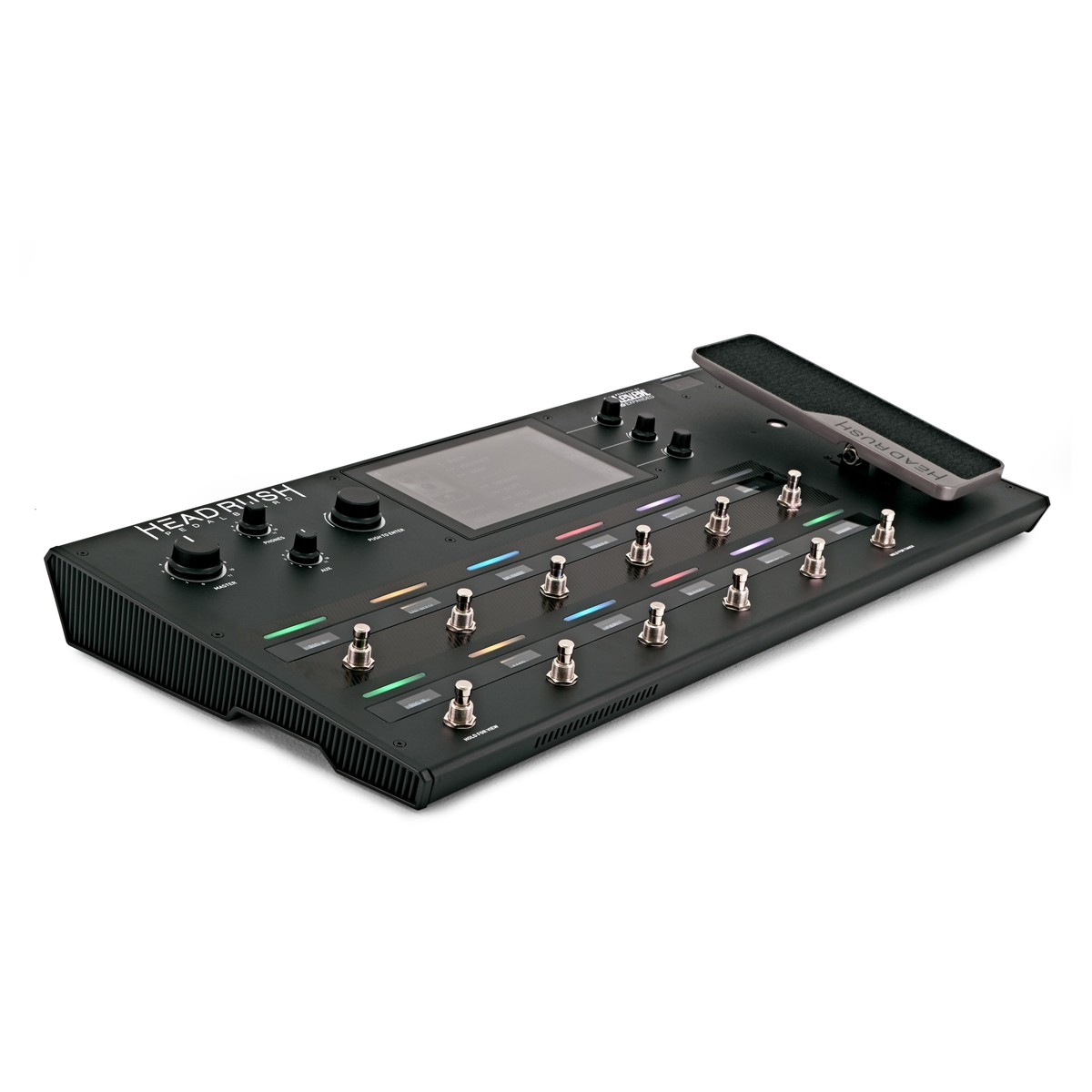 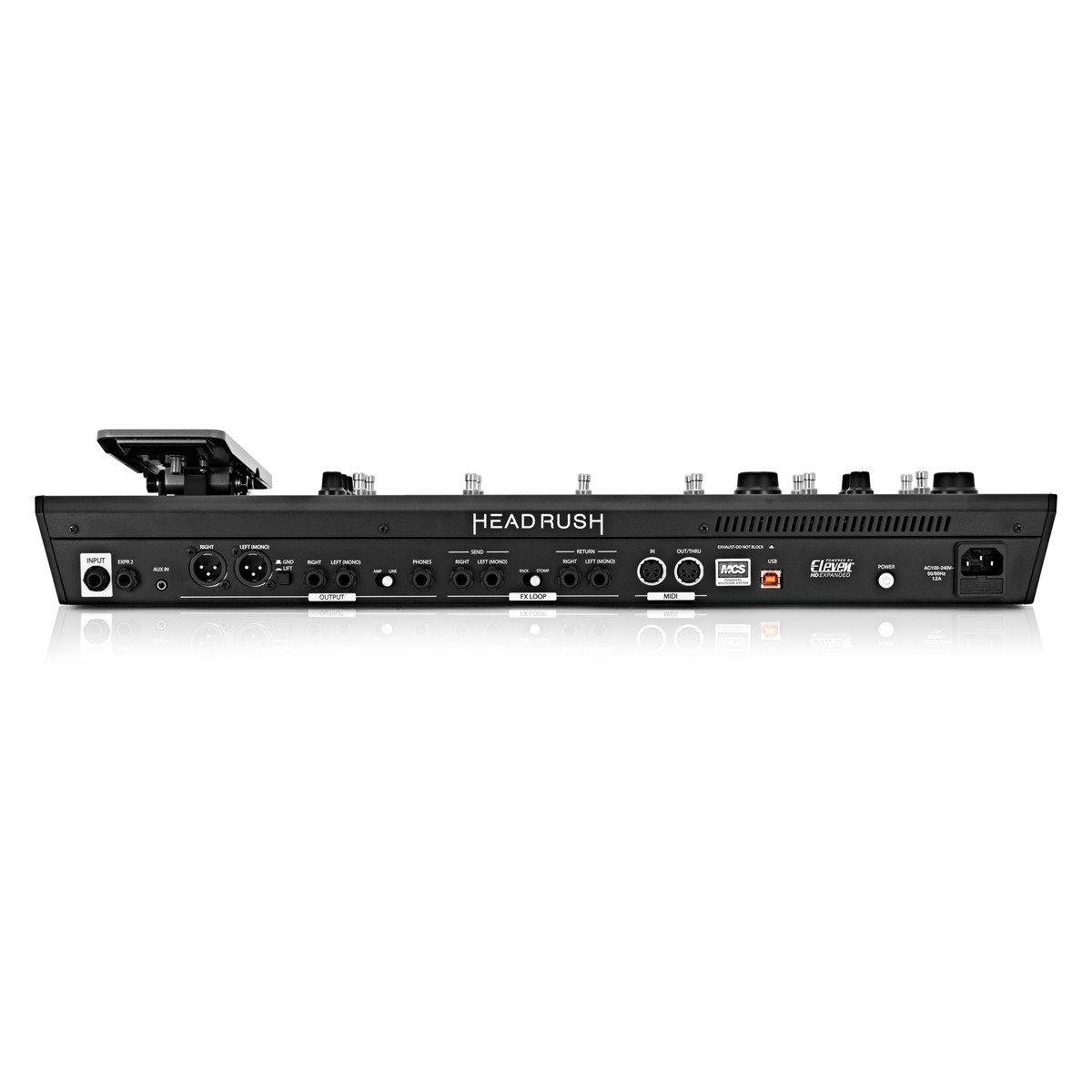 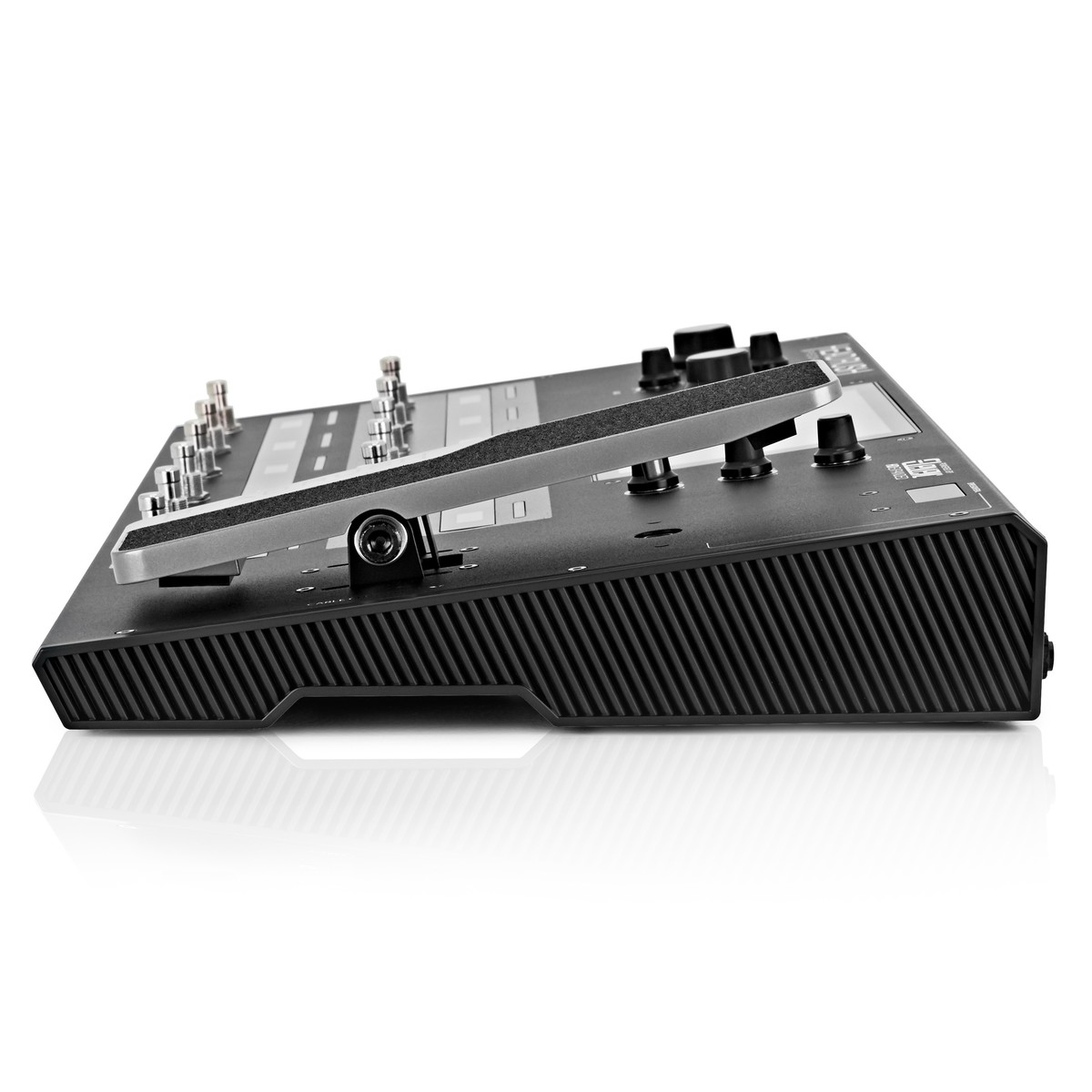 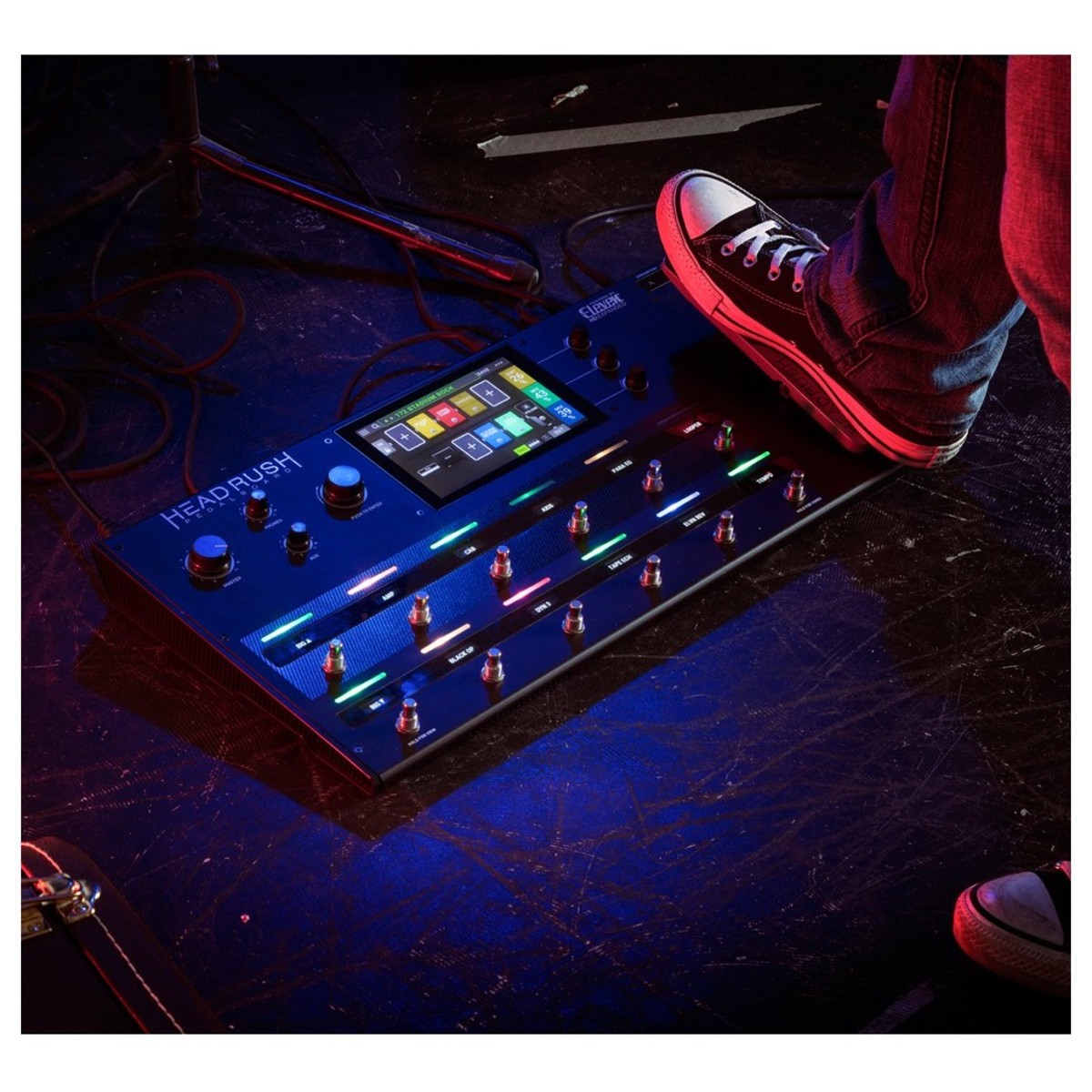 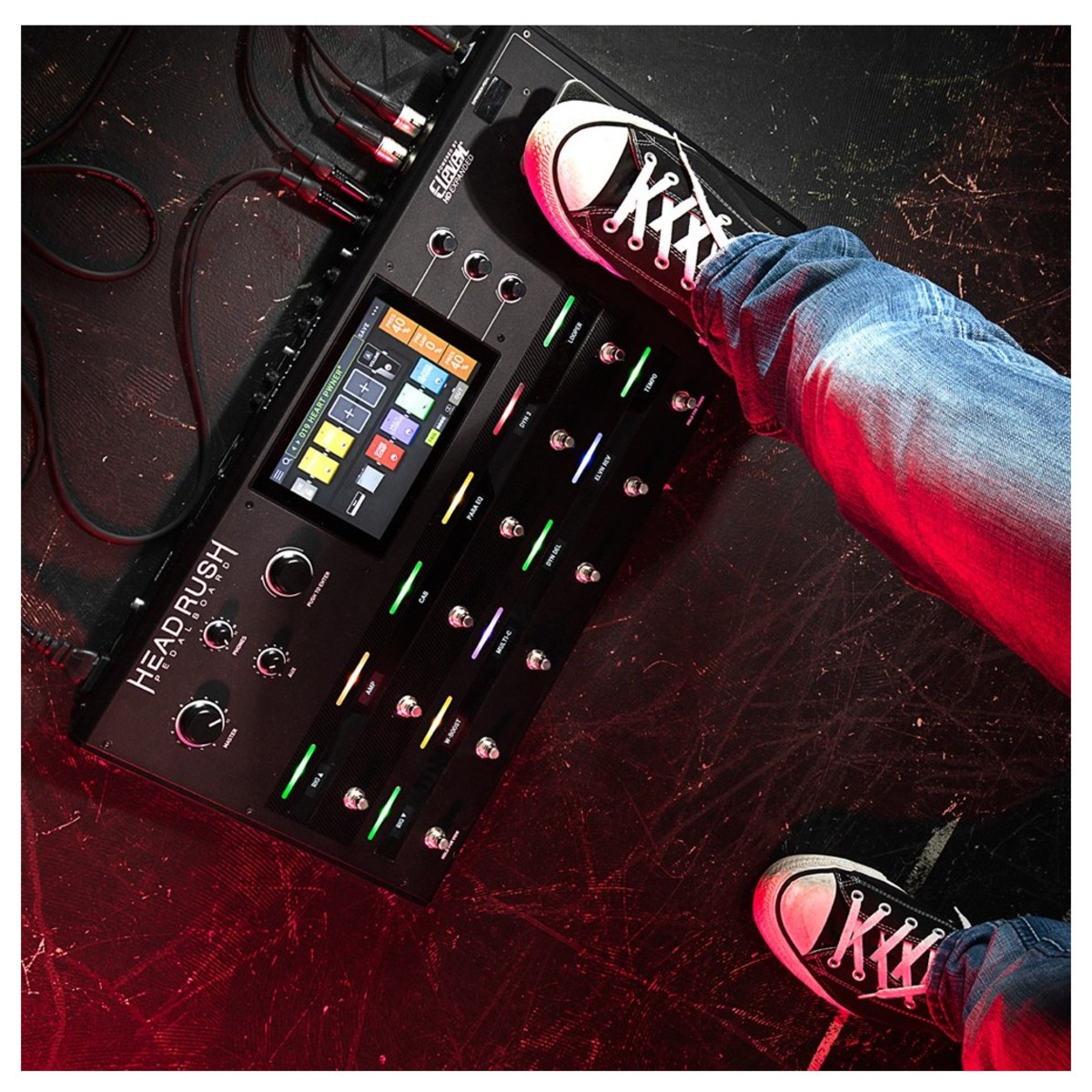 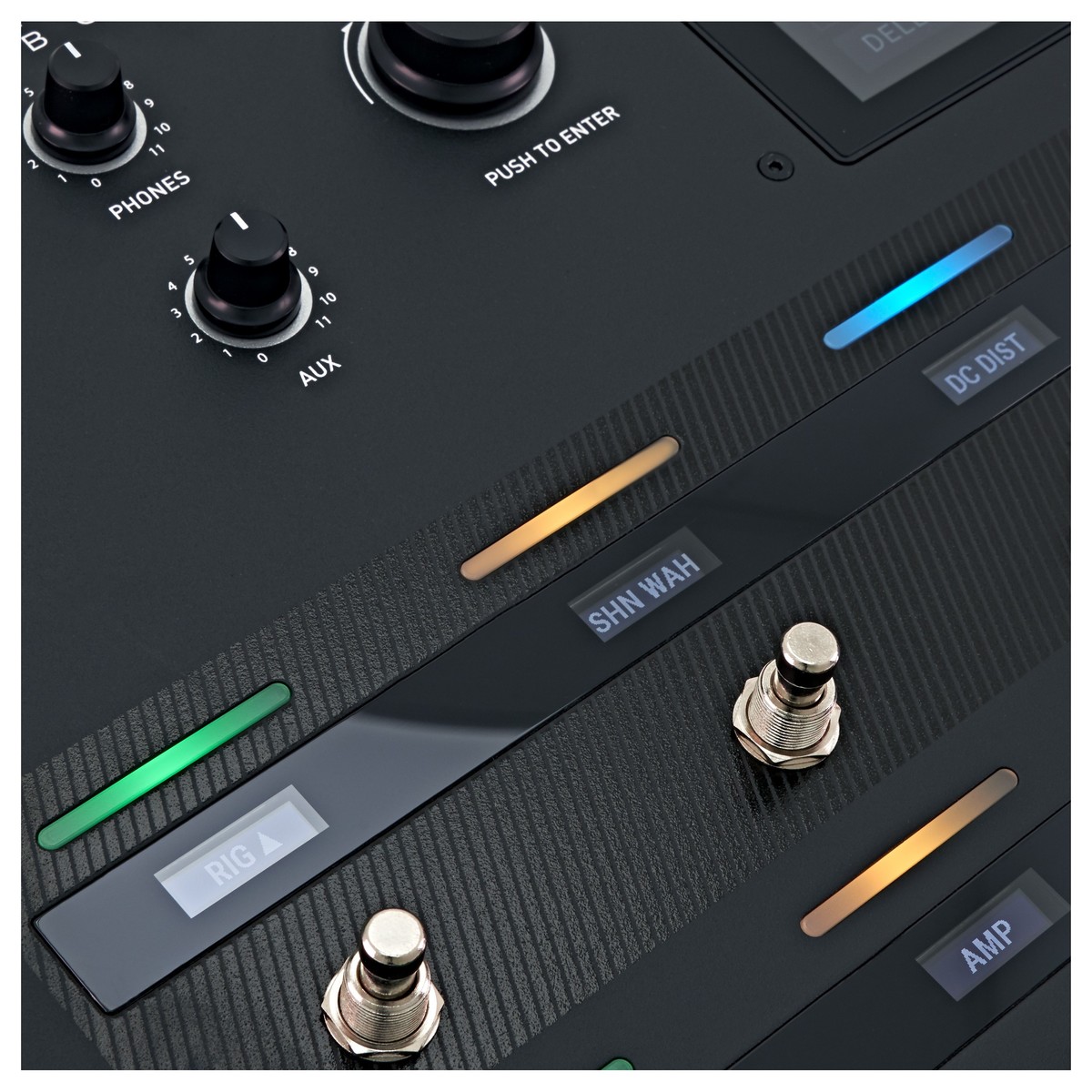 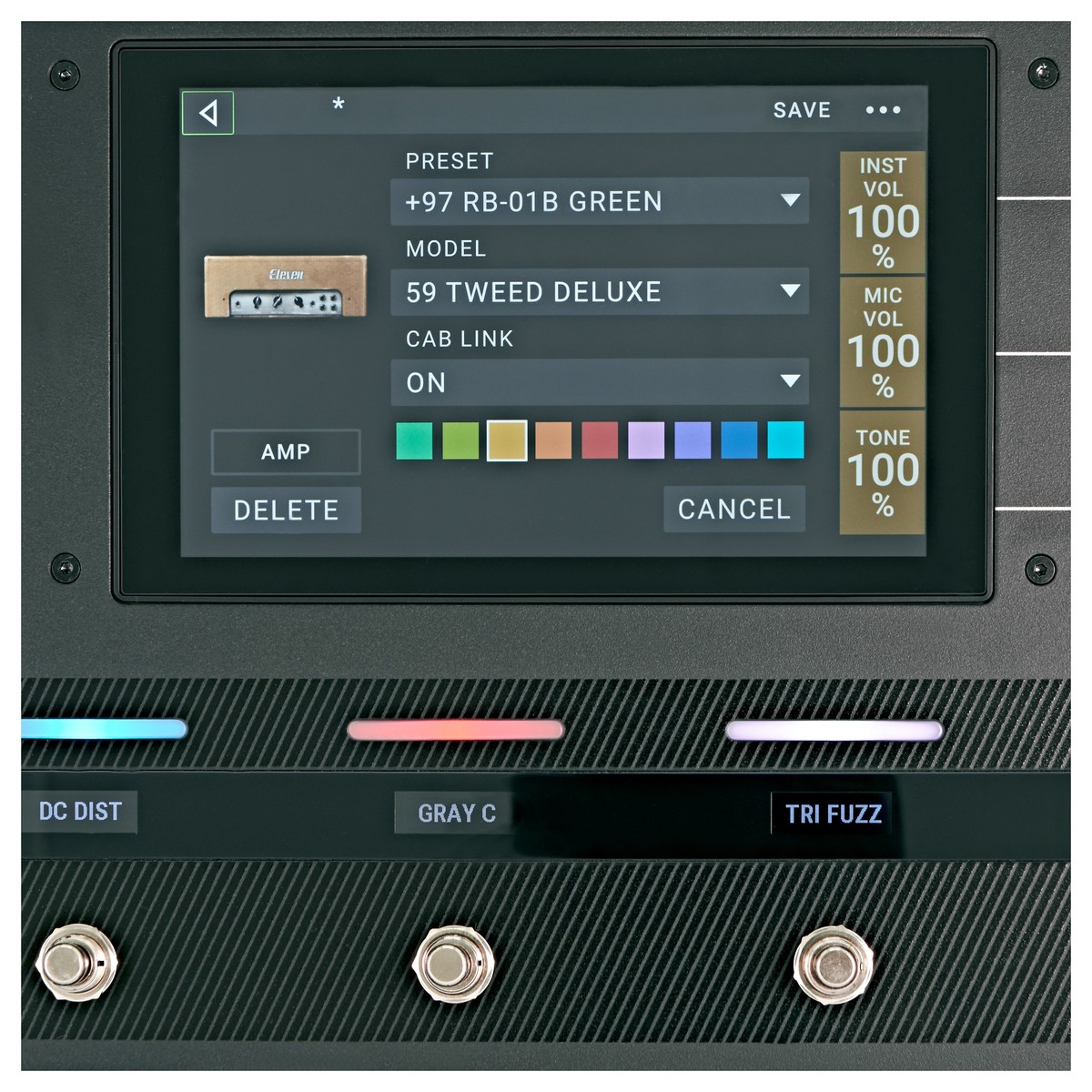 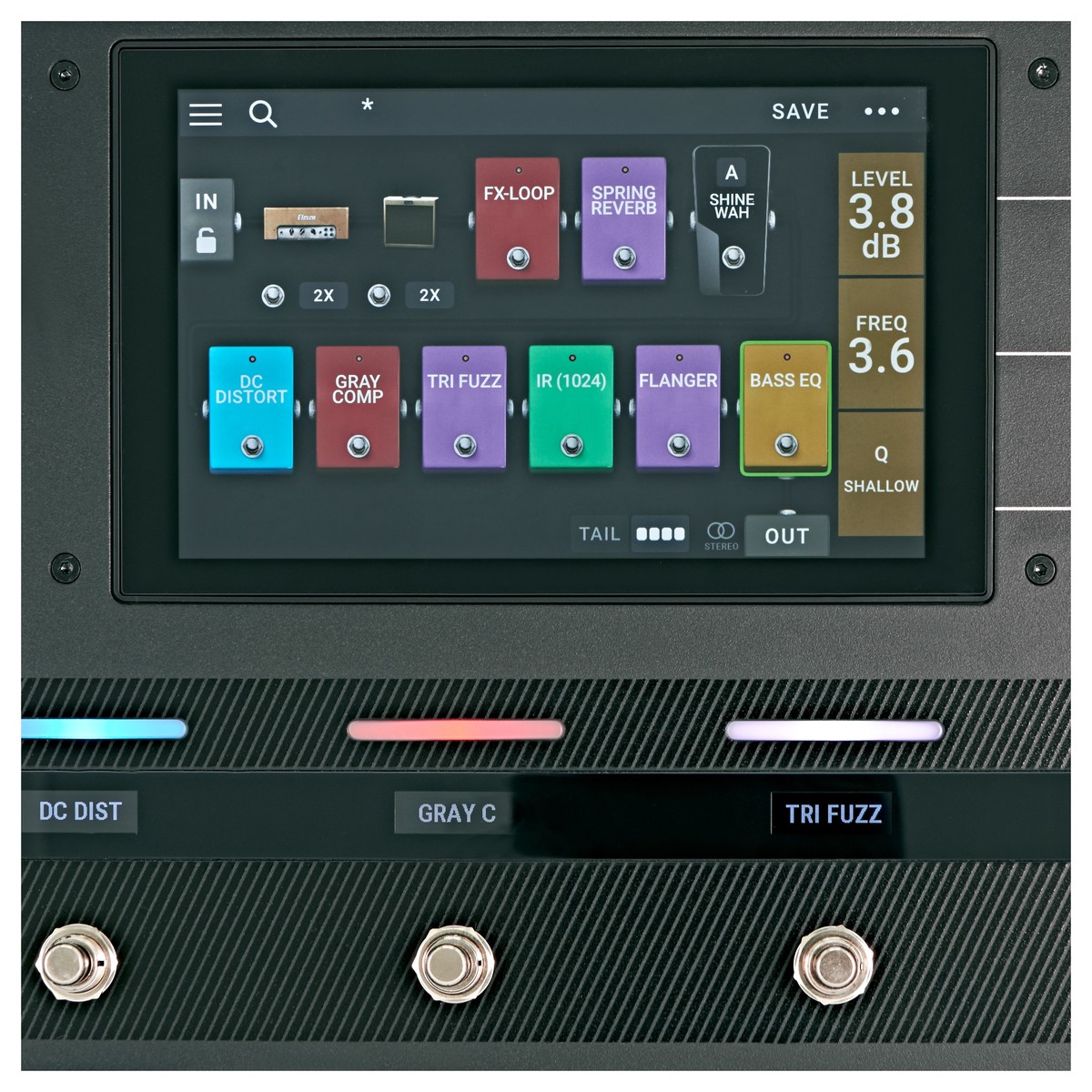 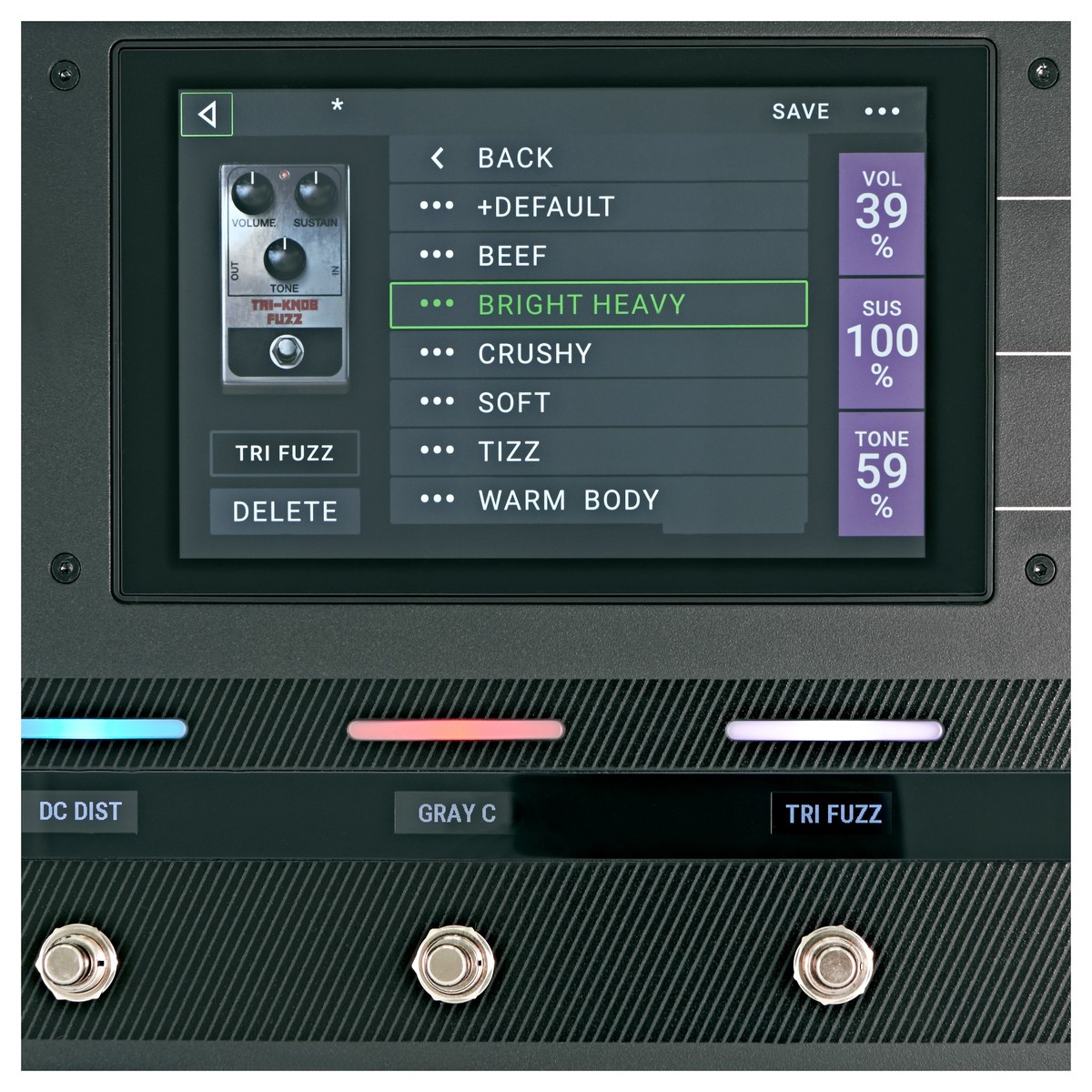 Split the cost into 3 equal monthly payments of £301.67 - interest free

The HeadRush Pedalboard Multi FX Processor is the path to your perfect tone - and it's easier than ever before. Boasting a wealth of unique features, most notably the first multi-fx processor to feature a multi-touch, 7-inch screen. This is then combined with a quad-core processor, custom designed to deliver the most authentic tones possible and seamlessly switch between them. Whether you're searching for the perfect studio tone, or needing to fill out a bigger stage, the HeadRush pedalboard makes your quest for the perfect sound as simple as possible.

Whether you’re aiming for vibrant American styles of cleans, gnarly British dirty tones, or a combination of the two with octave and modulation effects – the HeadRush can do it all. Powered by the newest version of AVID Eleven Rack HD Expanded software, this pedalboard is packed with authentic amplifier models, cabinets, microphones, and effects.

The simple-to-assign switches mean building your perfect pedalboard is incredibly easy. The expression pedal can link up to four (eight if you use the additional expression pedal input) effects or amplifier parameters per patch. This allows you to control any parameter you choose without your hands ever leaving the fretboard. Signal routing is near limitless, with pre-sets for stereo amplifiers, wet/dry/wet rigs, and 4-cable method patches. You can even assign outputs to split dry and wet signals and run simultaneously, making simple recording and incredibly versatile live performance

The HeadRush Pedalboard is the new standard in multi-effects units. Featuring an intuitive multi-touch 7” screen which allows you to make changes to your sound without diving into a manual every two minutes. Much like a smartphone or tablet, the touch screen allows for immediate changes, putting all the power at your fingertips. Moving pedals around in your signal chain or changing any parameters will be simple and easy, a single drag and drop not only helps to speed up for workflow, but also means you spend less time with your hands away from your instrument – so you can focus on your performance first.

The reinforced touchscreen is not only easy to navigate, but also incredibly clear from all angles. Whether you’re crammed into a pub corner with no light or you’re in a professional strobe setup on a large stage, the touchscreen display provides visual clarity no matter where you take it. The premium LED scribble strips above each of the 12 footswitches allow you to keep track of which effect is assigned to any given footswitch with just a quick glance.

The HeadRush can be used either as a standalone unit or it can easily integrate into your current setup. Two XLR outputs (with a ground lift switch) allow you to go directly into a desk, while two ¼ inch jack output allow for stereo amp set-up (you can also go into a desk with the additional line-level boost). The unit also boasts a stereo FX loop, allowing you to integrate pedals already featured within your rig, expanding your sound further.

Packed with additional USB connectivity on the back of the HeadRush, the versatility of this pedal is truly fantastic. The USB can simply, easily and effectively transfer your patches onto your computer for safekeeping, as well as download patches from the HeadRush Cloud (which allows users to share patches with one and other). You can also upload your own cabinet Impulse Responses (IRs) as well as 3 new warp effects such as the DROP TUNE, Chord Whammy, and Time Warp to the HeadRush, meaning you can expand your sound with custom impulses. You can also record and re-amp via the USB connection. The USB allows for four channels in an out, including a stereo dry and wet signal all at 24-bit rate, 96kHz sample rate, meaning every note is captured with extremely high clarity and quality. In order to re-amp, once the board is connected to your DAW, simply send the signal to the HeadRush, set the HeadRush to ‘Re-Amp’ in the USB settings and hit record.

After listening to community feedback, HeadRush have released firmware update 2.1 for the HeadRush Pedalboard and Gigboard. This update gives HeadRush users a host of additional new features such as 3 stunning new, classic amp models, a huge 140 exclusive cabinets IRs (Impulse Responses), as well as 3 new warp effects such as DROP TUNE, Chord Whammy, and Time Warp, as well as 3 new overdrive/filter effects, and 2 reverb/delay effects. As well as this huge update to the sounds and tones of the PedalBoard, there have also been software updates to the Setlist feature, Global Settings, and a host more inner working to optimise the efficiency of your Pedlaboard. For full release notes, see the PDF above.

Once again, Headrush have delivered on their promise to keep expanding the capabilities of their hugely popular Gigboard and pedalboard. This update gives HeadRush users a host of additional new features such as two new '05 Tangerine 30 amp models, and five new distortion effects, which include the MX distortion and K Drive, amongst others. There's also three new modulation effects, as well as the Ambi Verb Delay/Reverb. As if that weren't enough, Headrush have revised the Looper's FEEDBACK control and thrown in some handy UI updates. For full release notes, see the PDF above.

The HeadRush amp and FX library is continuously expanding. Users have spoke and the creators have listened, delivering with four new amp models, two new overdrive settings, a ferocious fuzz pedal, and a brilliant bass amp. The four new amplifiers emit a collective selection of bright and blissful cleans, heavy saturating crunch tones, and finally menacing metal loads with crisp characteristics. This goes hand in hand with a multitude of effects that are based off titans of the pedal industry. Bassists aren’t excluded here, they will be able to add the B Dist 7000 to their library, inspired heavily by the Darkglass Microtubes.