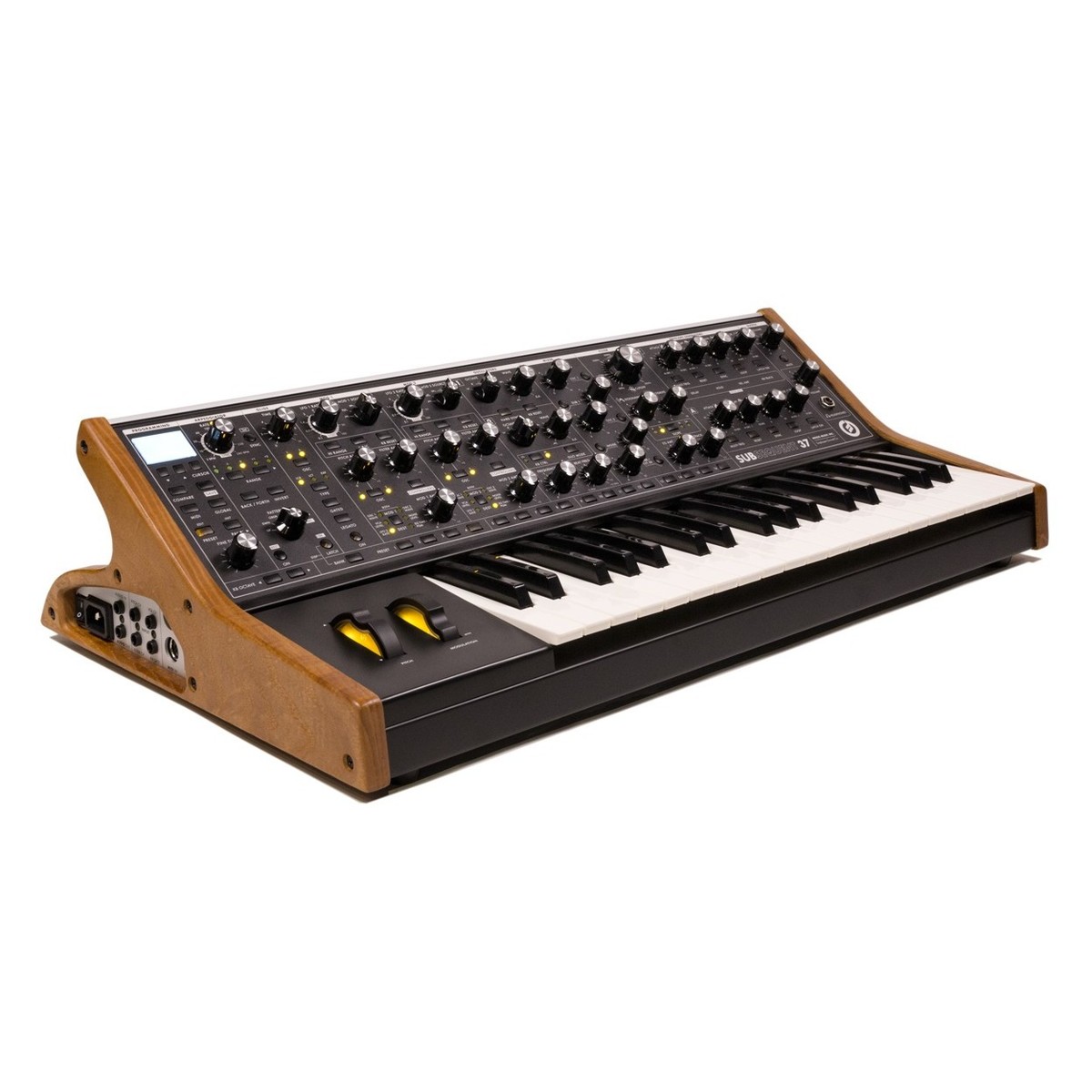 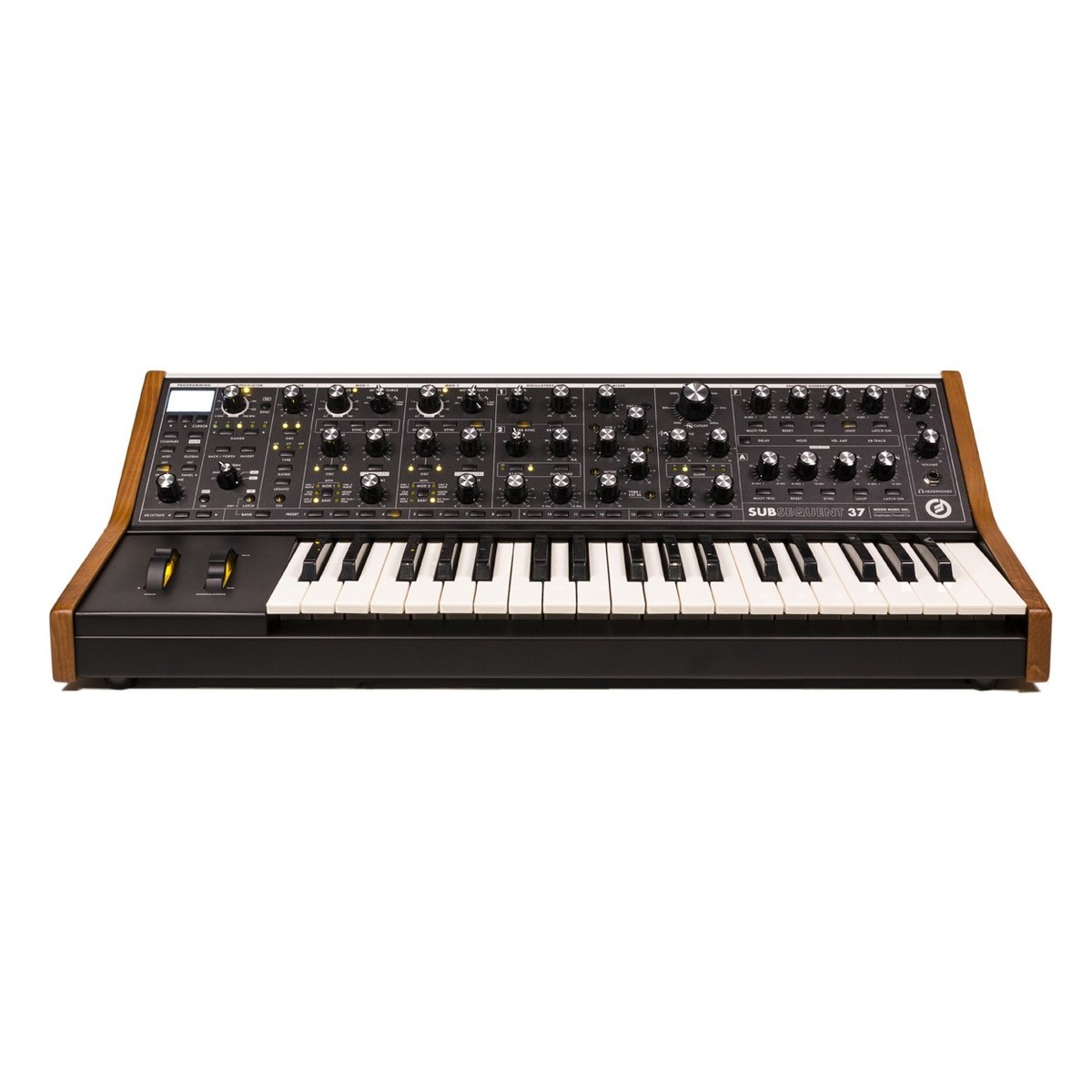 This product is currently not available for purchase
NEARLY NEW

The Moog Subsequent 37 Synthesizer delivers exceptional Moog sound and build quality in the form of this 2-note paraphonic analog synthesizer. Based on the revered and award-winning design of one of Moog's most prestigious modern synthesizers, the Subsequent 37 Tribute Edition is equipped with an intuitive control panel featuring 74 tactile switches and 40 control knobs. With a reputation for astounding sound, Moog have implemented a wide array of sound-sculpting tools and functions for creating the sound that's in your head. Whilst maintaining the charm and power of its predecessor, the Moog Subsequent 37 Tribute Edition has been expertly crafted using feedback and requests from Sub 37 users, as well as their incredible wealth of knowledge from their years in the industry. This new and improved synthesizer is the ultimate sound-design tool with improved headroom and a whole host of additional features.

To view detailed technical specifications for the Subsequent 37, or to view the user manual in PDF format, please click on the PDF links below.

Nearly New: This product may have been opened for quality control purposes, returned by a customer, or has been refurbished. Otherwise, the product operates as new. This is a great opportunity to buy a fully functioning product at a discounted price, supplied with a two-year warranty.

To hear a collection of sound clips from the Moog Subsequent 37, simply click here.

Based on the revered Moog Sub 37, this re-design has been built following feedback and requests from Sub 37 users, as well as carrying out their own research and development. Equipped with all the same features and functions as its predecessor, the Subsequent 37 also incorporates new assignable outputs, as well as a completely overhauled sound engine, and much more. Retaining the 37-note keyboard, the Subsequent 37's keys can be used in either Mono or Duo modes, and feature a rapid lightweight action, with Aftertouch capabilities. With two powerful analog oscillators at its core, the Moog Subsequent 37 delivers a huge array of astounding and rich sounds.

The Subsequent 37 has been overhauled with the addition of a newly designed sound engine. The synthesizer boasts a huge 256 presets which are efficiently arranged in 16 banks consisting of 16 patches. These can be directly accessed via the vibrant LED display, and range from classic synthesizer sounds to the more modern and contemporary examples, as well as a selection of pads and more. Re-designed from the ground up, the new sound engine delivers rich, defined low-end and crisp highs. Providing a truly huge sound, the Subsequent 37 also features a reworked Multidrive section with the ability to add a wide range of flexible dirt and grit to your sound.

On top of a revamped sound engine, the Subsequent's mixer section also features twice the headroom of its predecessor. This enables you to create a huge range of beautiful clean sounds in both performance modes, greatly increasing the versatility and sonic palette of the synthesizer. The synth's Ladder filter's gain-staging has also been redesigned with a new shape, which results in boosting harmonic saturation, as well as analog compression. This gives you a much deeper, richer low-end. Combined with the revamped sound engine and Multidrive circuit, the new sonic capabilities of the Subsequent 37 open up the flexibility of the synthesizer for you to take full advantage of.

The Subsequent 37 features a collection of additional outputs which can be assigned, which is something its predecessor did not have. With a total of four CV outputs as well as two gate outputs, the assignable outs enable you to send data from the Subsequent 37 to external devices such as modular systems, other synthesizers, MIDI interfaces, and many more.

The front panel of the Moog Subsequent 37 is equipped with 40 control knobs and 74 switches, giving you the ability to control every single part of your sound. Each control knob gives you accurate authority over the parameters that they control, enabling you to sculpt the sound you want with incredible precision. The Subsequent 37 boasts Moog's highly regarded filter, controllable via the large filter cutoff knob. The size and design of the cutoff control gives you un-obstructed access to one of the key features of the synth, allowing you to make changes quickly and easily at any time. The unit is also equipped with two flexible modulation buses, allowing you to add interesting movement and depth to your sound.