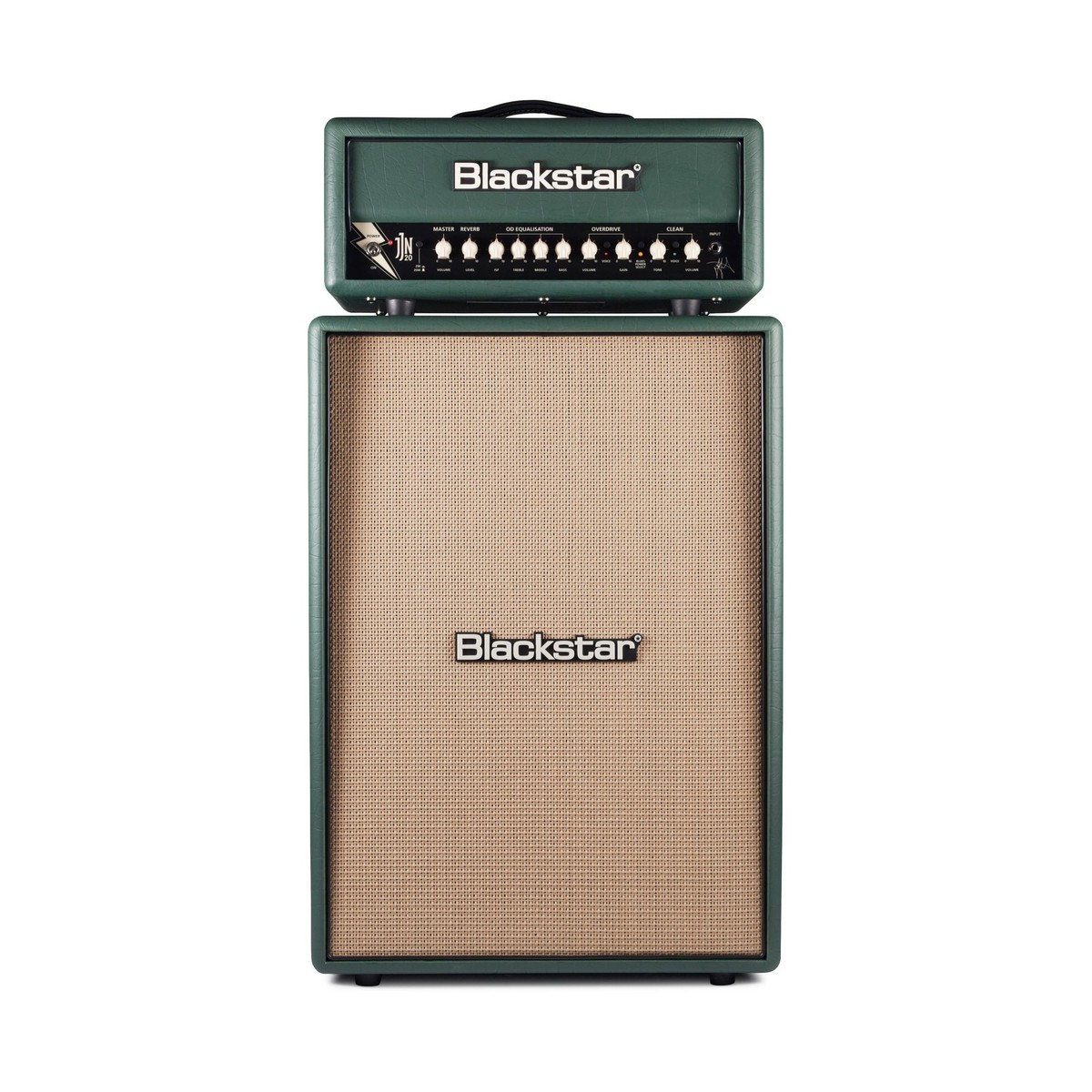 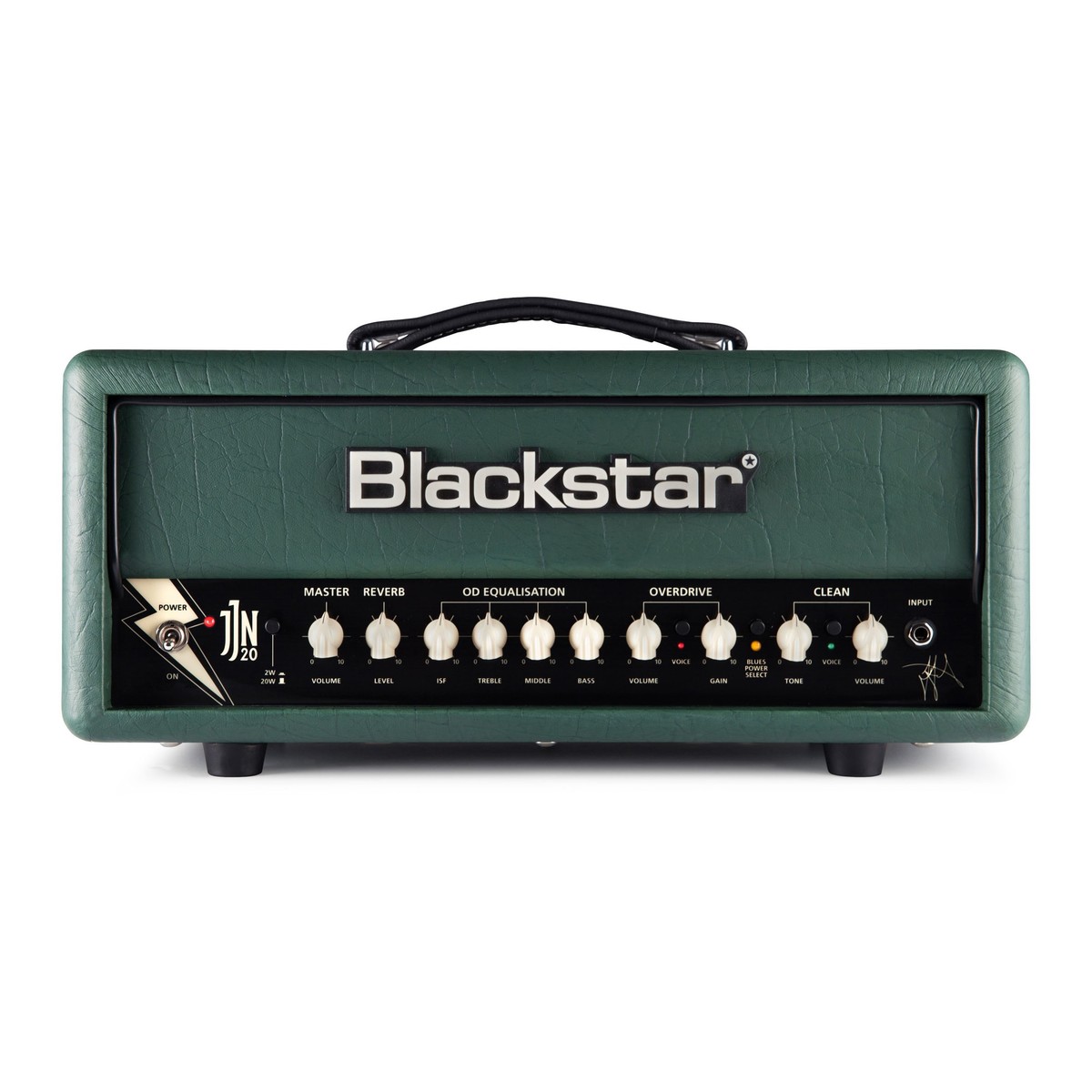 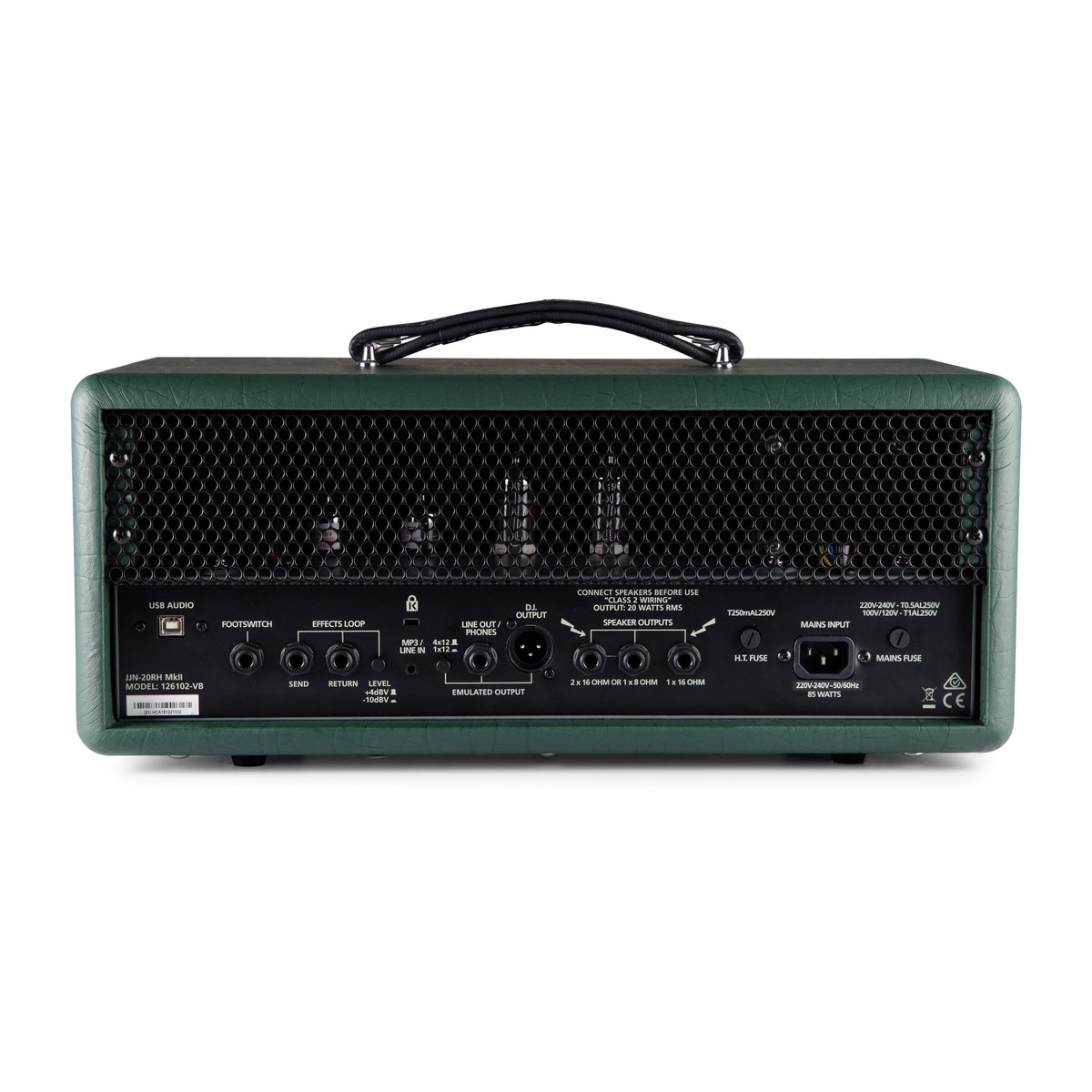 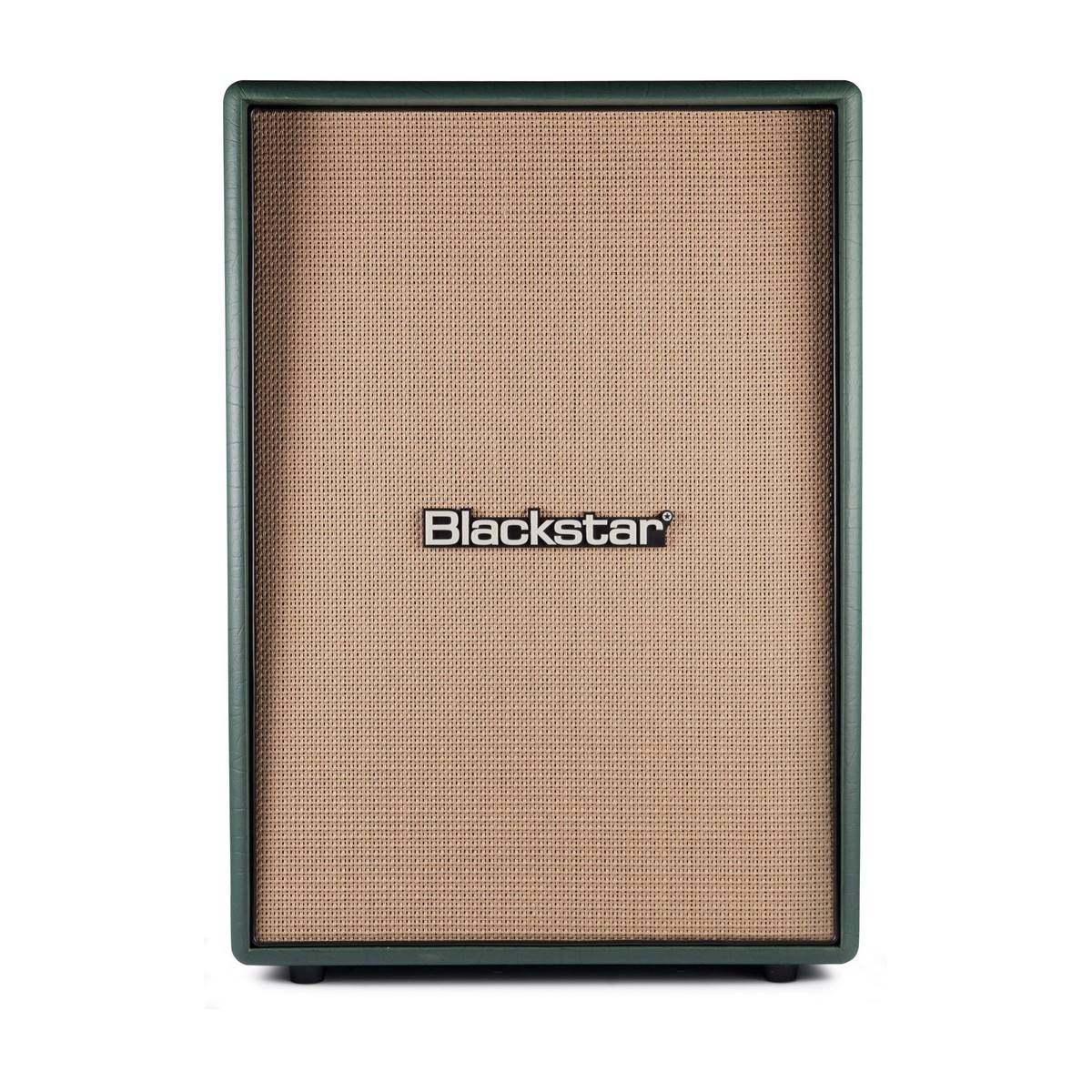 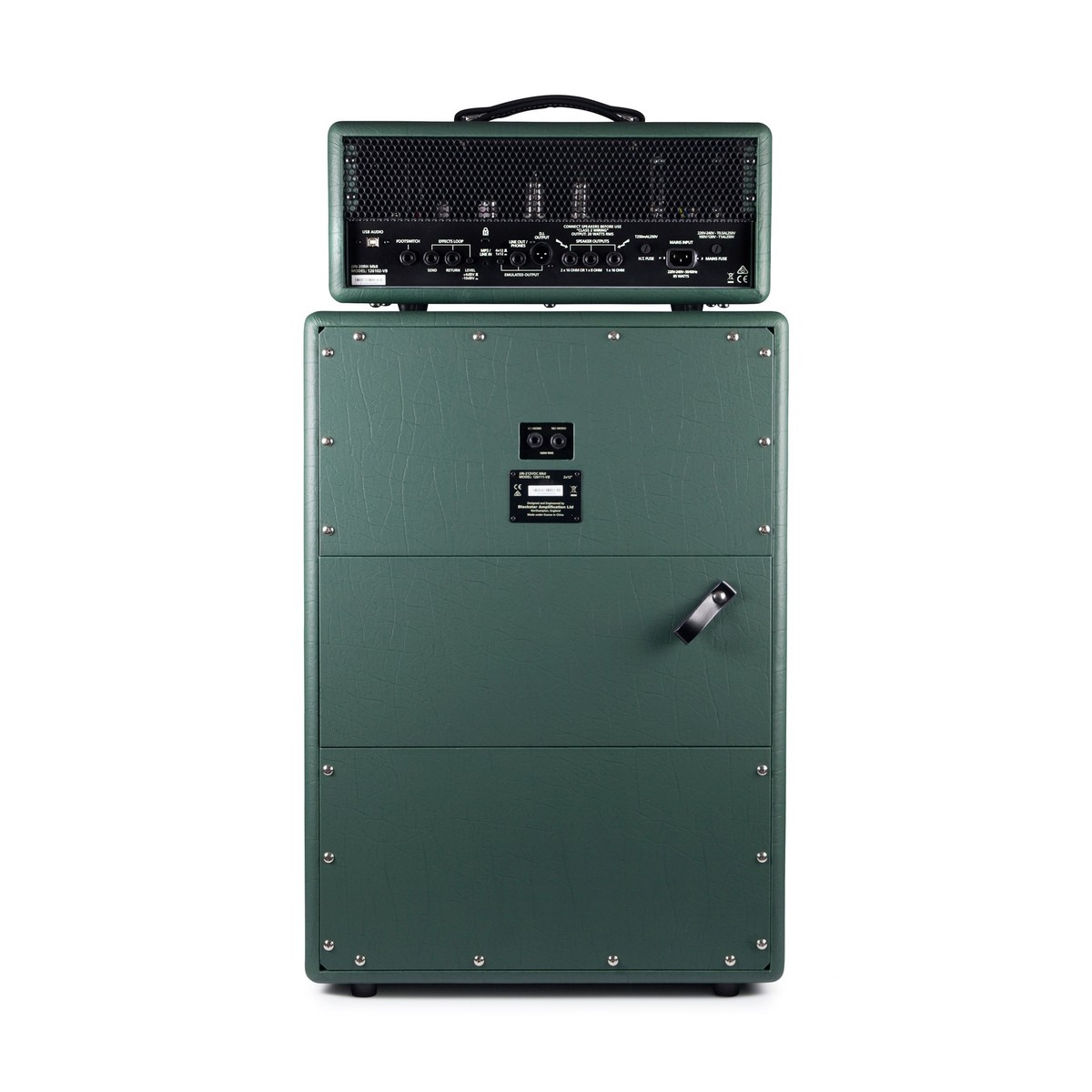 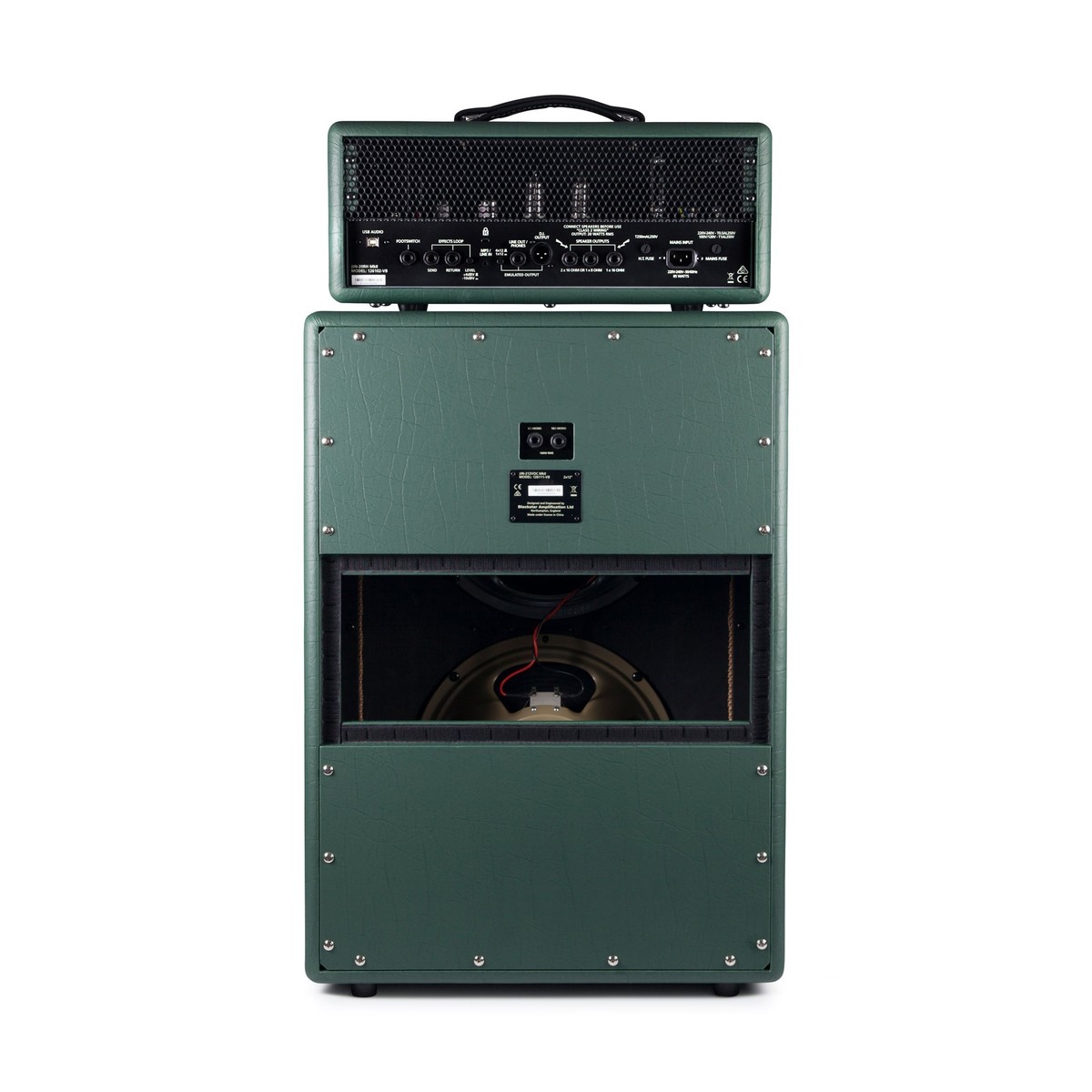 Monumental power. The Blackstar Jared James Nichols Valve Head & 2x12 Cab provides players with a gigantic sound for every musical situation. Designed and developed by legendary hard rock/blues guitarist Jared James Nichols, it will blow your sound up to new heights. It features a full valve construction for that thumping, crisp, articulate voice, as well as an extensive array of dials for smooth sonic control.

Let your sound soar. Nichols helped create the voicing of this amp to suit massive, high energy performances - and that's exactly what you'll get from it. From the enhanced, clear, sparkling clean channels to the downright dirty overdrive, everything springs to life with pristine tone and raw power. The JJN MKII cab is fitted with two different 12? Celestion speakers, offering a tone for any style you wish. The V-Type is tailored for that exciting, modern-vintage feel, whereas the G12T-75 excels in high-gain situations. Find your perfect voice.

He's pioneered his own sound. Jared James Nichols has created his own 'pick-less' guitar playing style, which has given him a stellar reputation in the guitar world. His signature amp contains all the quality and tonal goodness which you would expect from such a prolific guitarist. With 20W of power, you'll have more than enough volume to take to conquer any stage. There's also a 2W mode for quieter practice settings.

Two EL84 power tubes and ECC83 preamp tubes form the foundation of this exceptional amp's powerful sound. With its all-tube construction at your back, you can expect that classic, sought-after, explosive tube voice to come roaring out of this amp whenever you play. No matter what style you're into, the dynamic JJN-20RH MKII will deliver on your tonal demands, no questions asked.

For the performers. A lot of time and effort has gone into developing the voice of this amp – and it shows. Enhanced cleans pave the way for beautifully crisp, sparkling tone, with 'American' and 'British' voicing options for increased versatility. The overdrive has also had plenty of attention, offering two voicing choices. You'll be able to choose between classic British overdrive, which is rich and crunchy, and a higher gain overdrive which will make your ears melt with its tight, resonant low end response.

With these footswitchable options at your fingertips, you'll be able to dial in any sound you want. The extensive EQ section allows for simple, fast sonic shaping. Each control knob is incredibly responsive, allowing you to access a wealth of different tones. There's built-in studio-quality reverb to give you that classic echo, as well as intuitive voice buttons to help you select your ideal tone. You'll find that this quality amp offers a resounding voice which will give your music a real kick.

It's a looker. With a stunning green finish and unique design, this amp looks as good as it sounds. For such a powerful amp, it is also incredibly easy to carry and transport. The tilt-back design makes it easier to use the control knobs, and professional recording connectivity means you'll love using this amp both live and in the studio. With his BLUESPOWER style and passion for pure tonal quality, Jared James Nichols has helped to create a truly legendary amp which glows with pride. You won't hear another like it.

Signature sound of an icon

Revive the tone of blues-rock. Jared James Nichols is hailed for his high-energy performances and pick-less blues-rock style of playing. So, naturally, Blackstar have created a guitar cab that caters to the demands of the modern blues rocker. Two 12” Celestion speakers have been implemented to unleash a gigantic sound, with plenty of tonal variety. From modern-vintage flair, to sweet, high-gain aggression – the Blackstar JJN MKII gifts players with an abundance of options for their sound.

For a guitarist with such unique technique, this monstrous cab simply had to be powerful. And Blackstar haven’t disappointed. Packed with 160 Watts of sonic dynamism, the JJN MKII makes pick-less playing more dominant than ever before. Because such a distinctive sound should be amplified to its maximum volume. Make Nichols’ style your own, with a cab that is tailored for his influential tone.