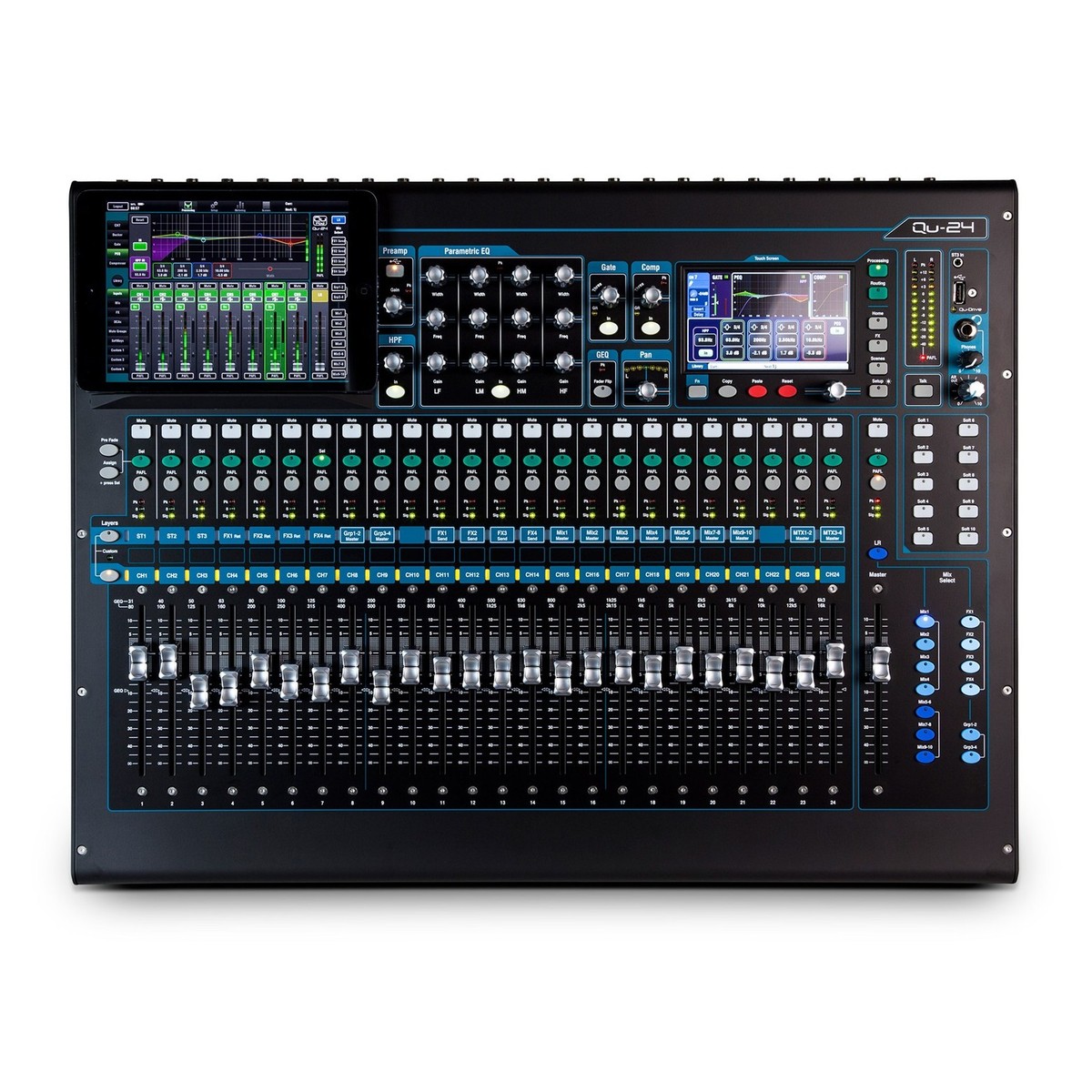 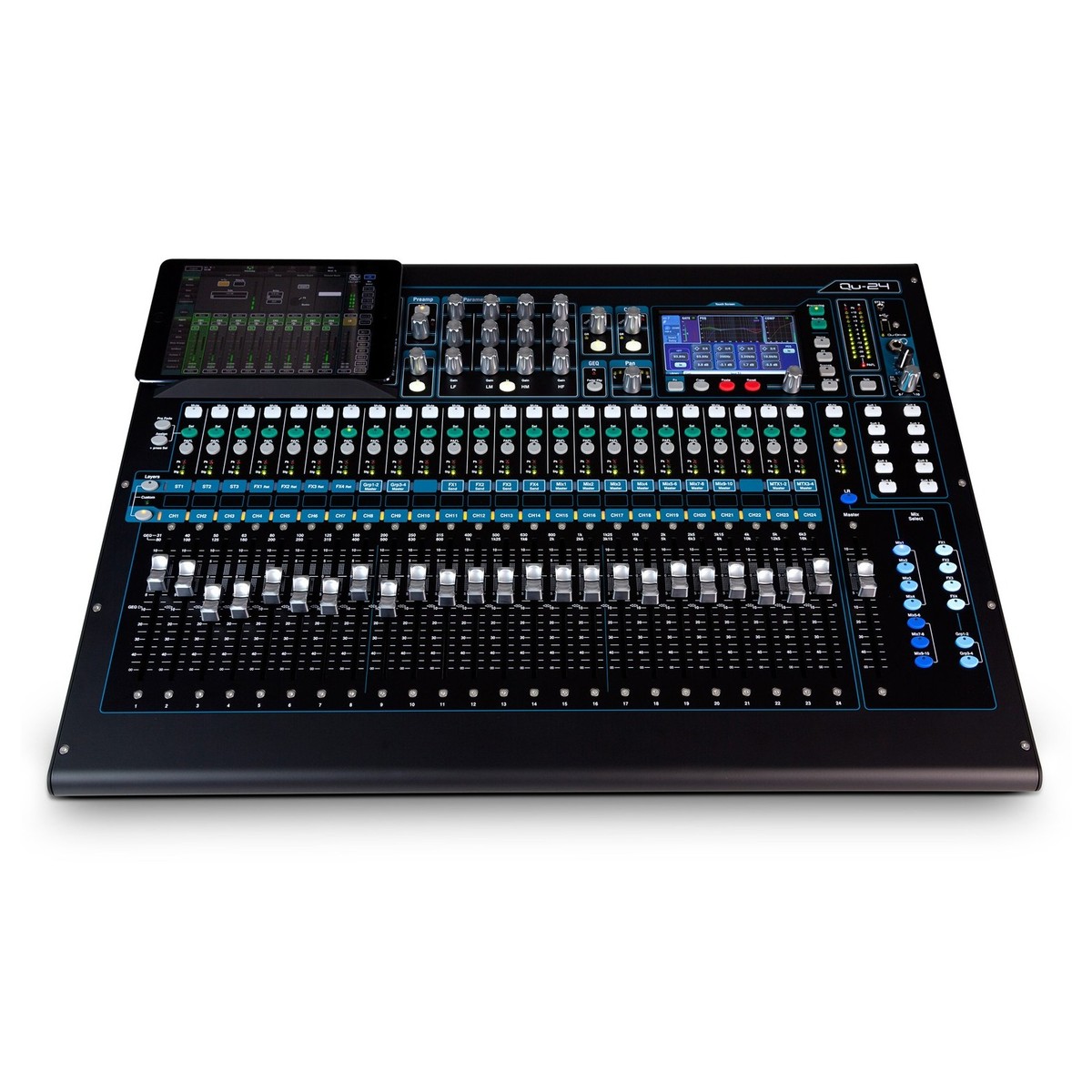 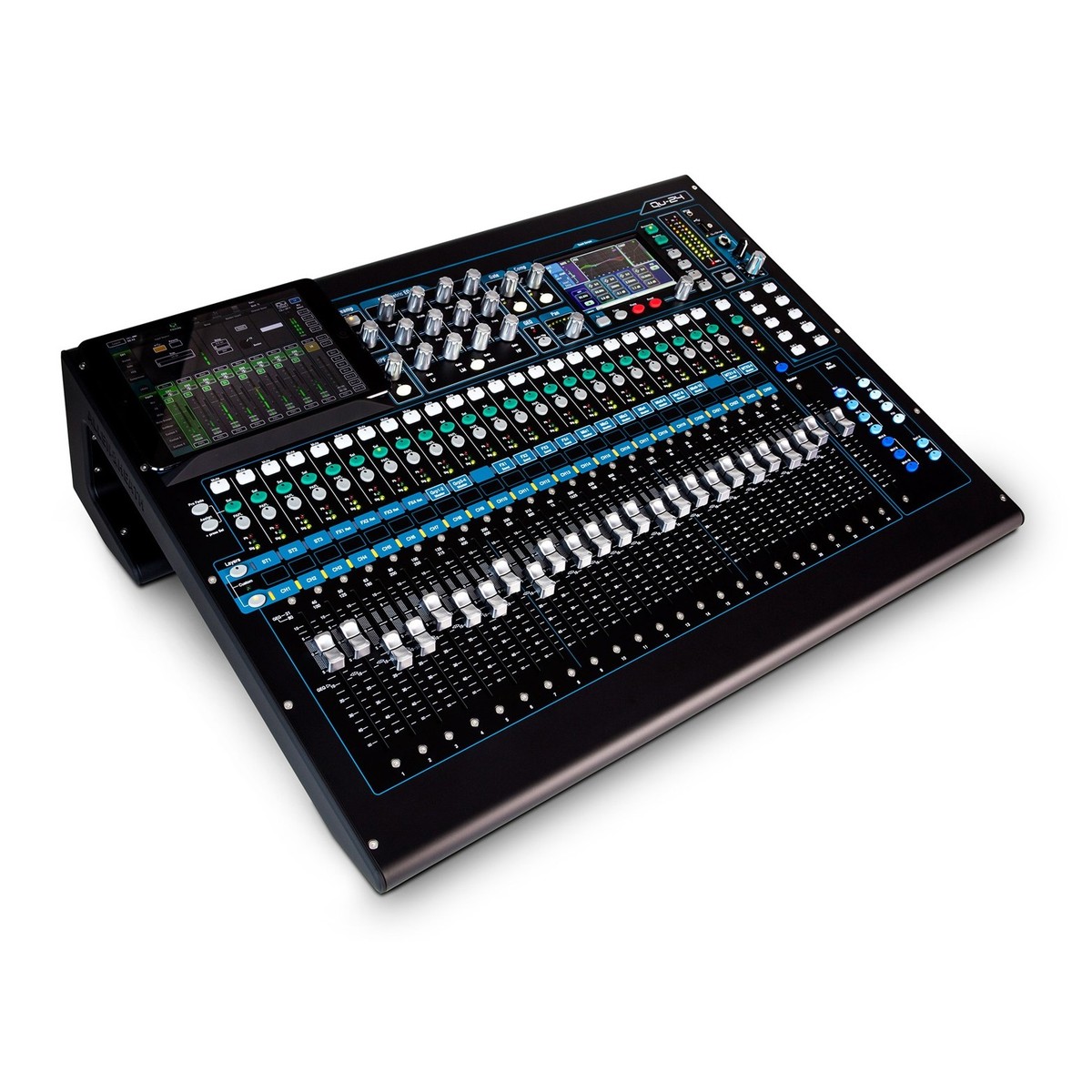 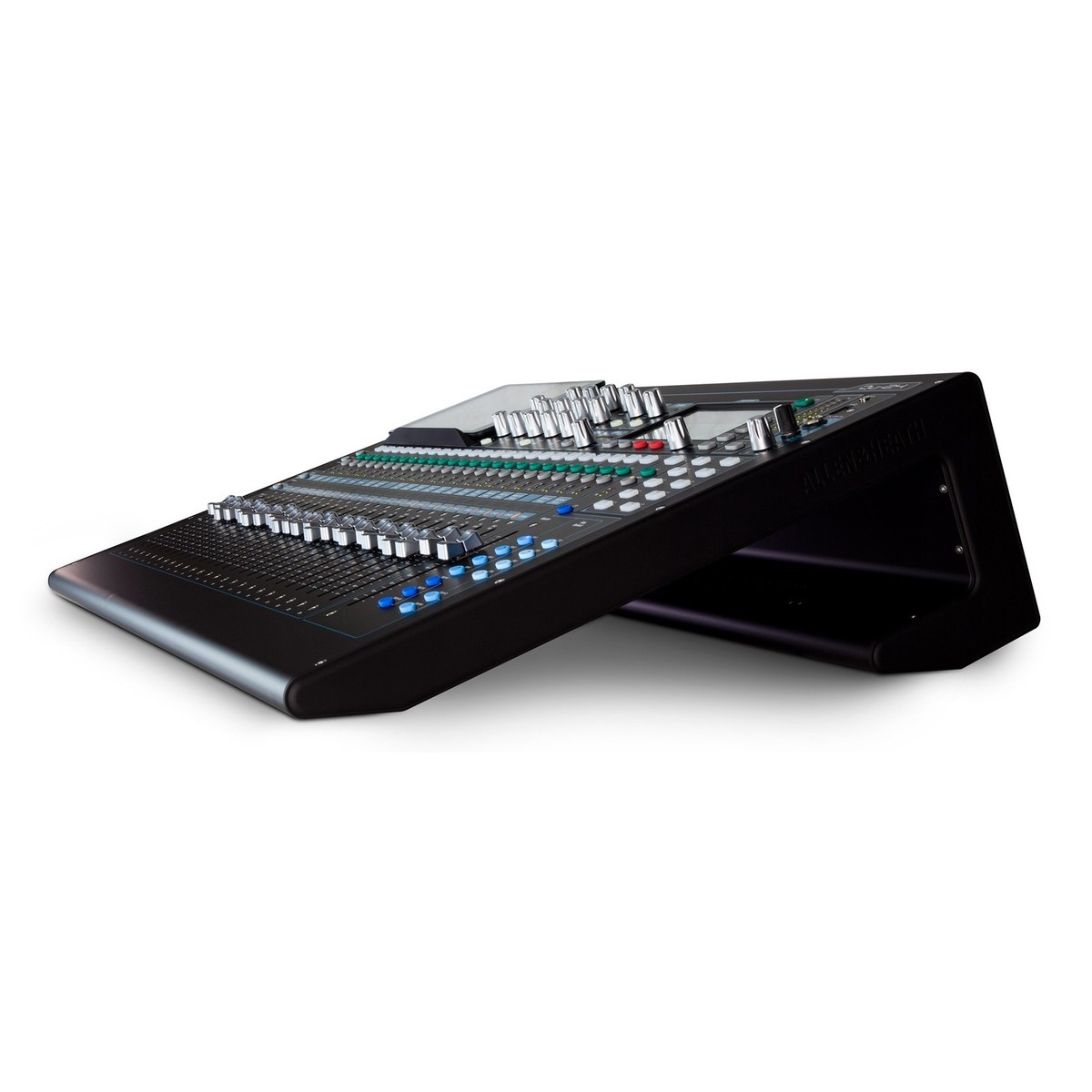 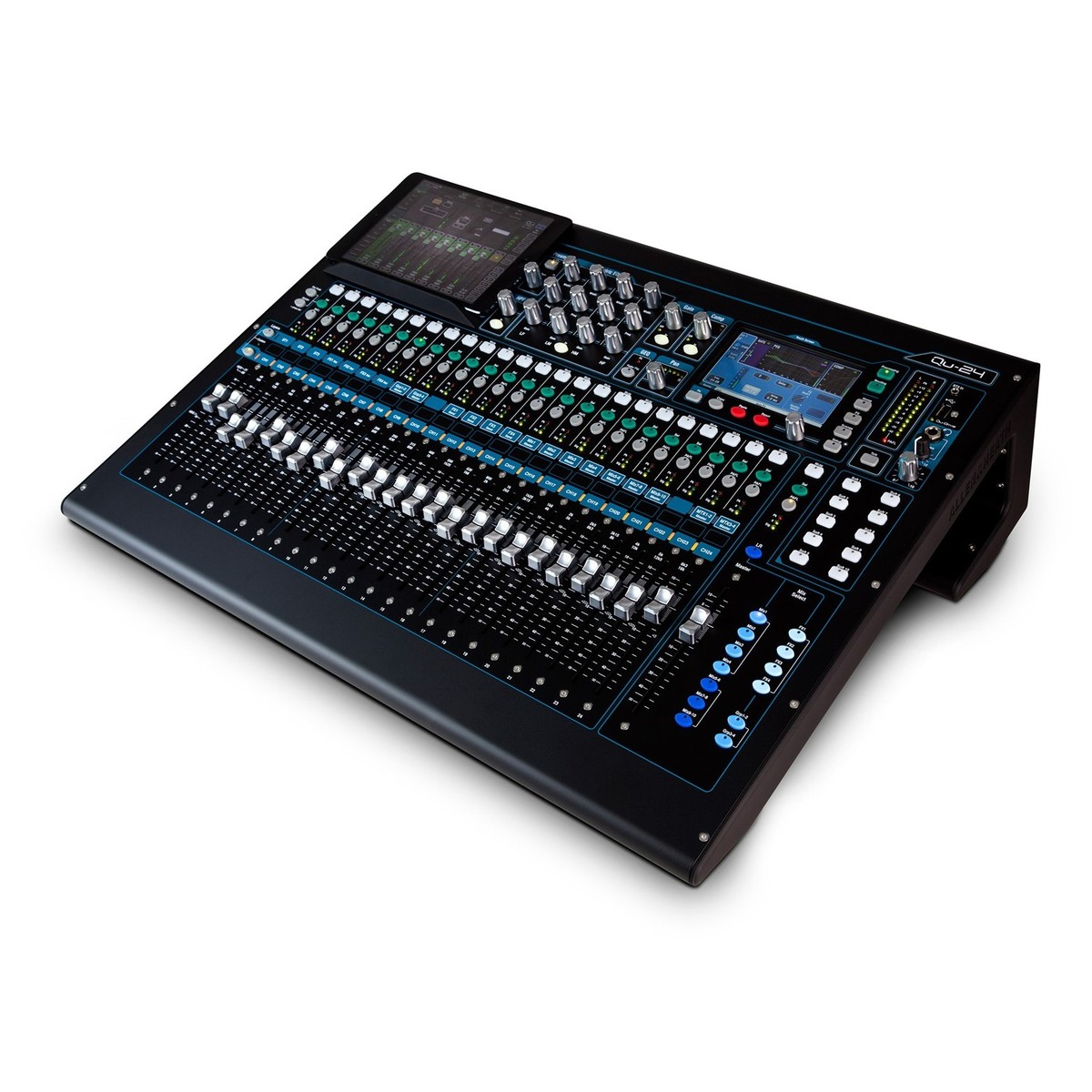 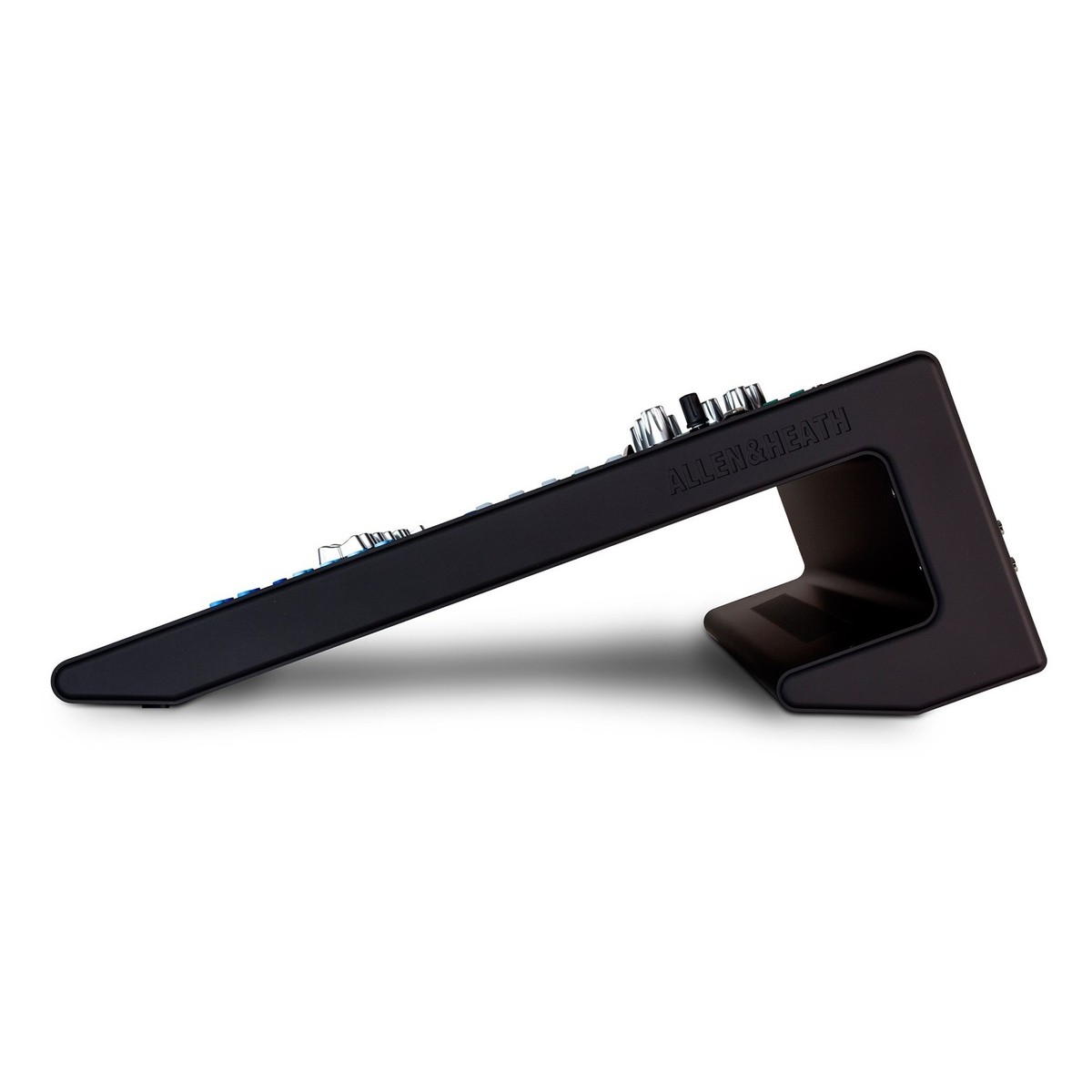 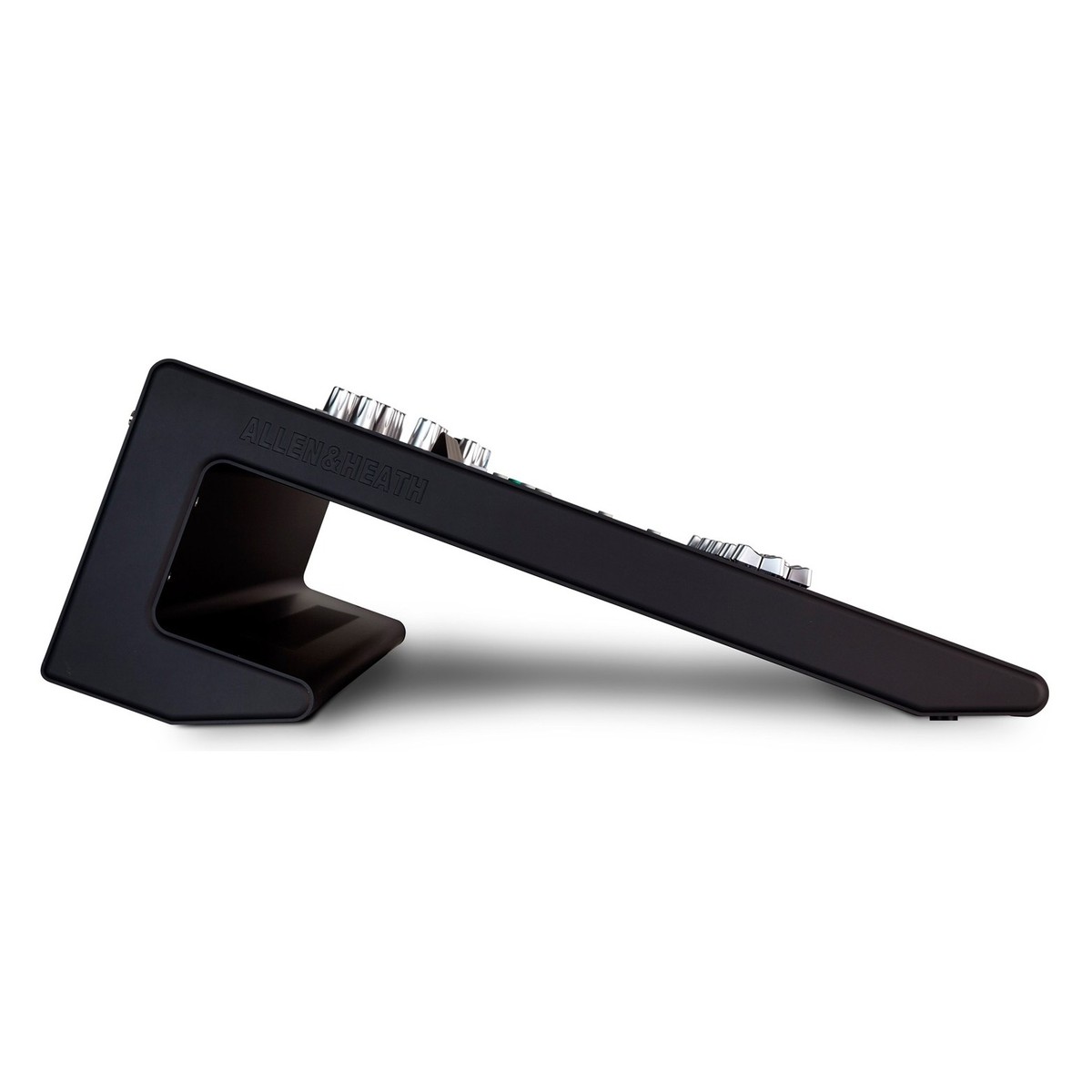 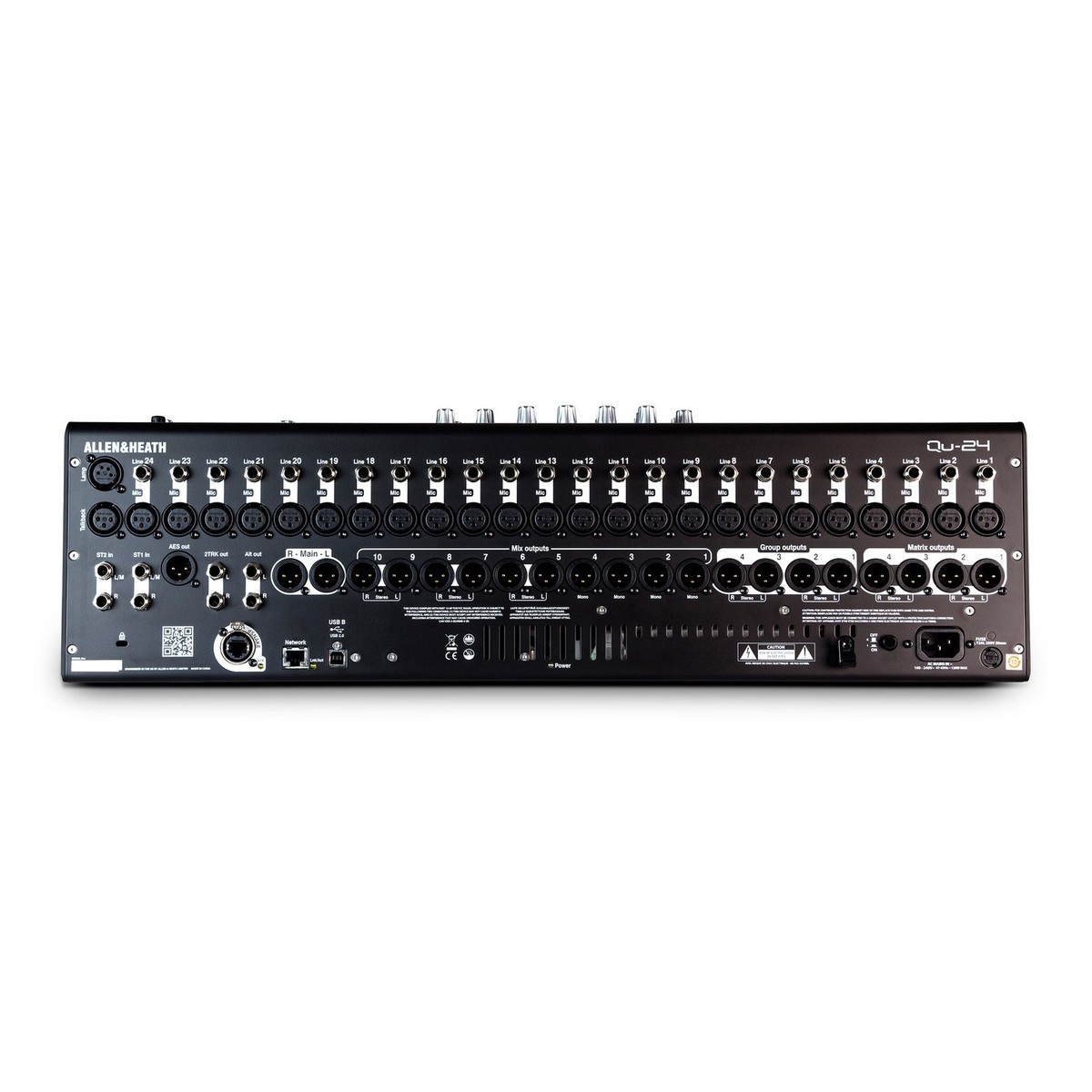 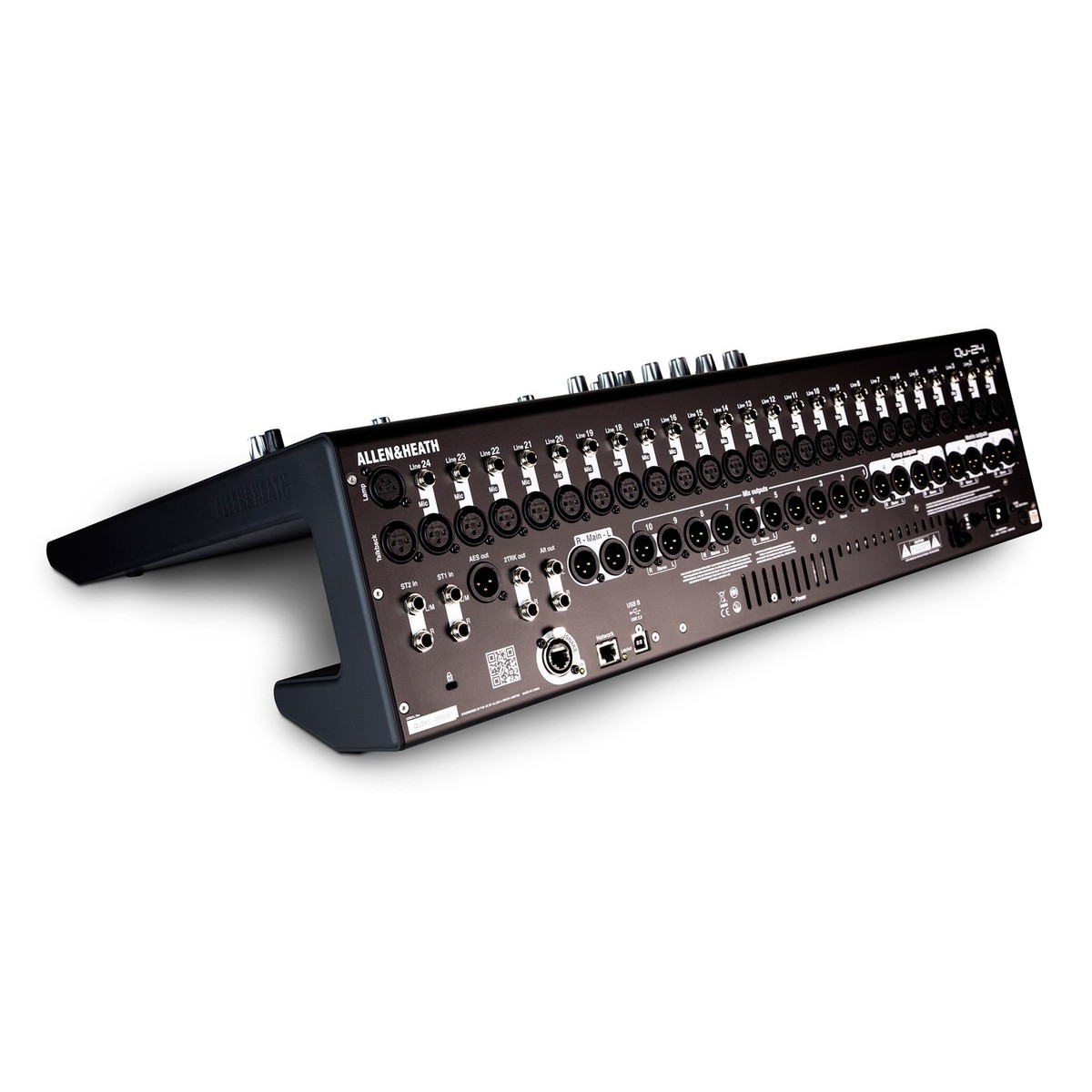 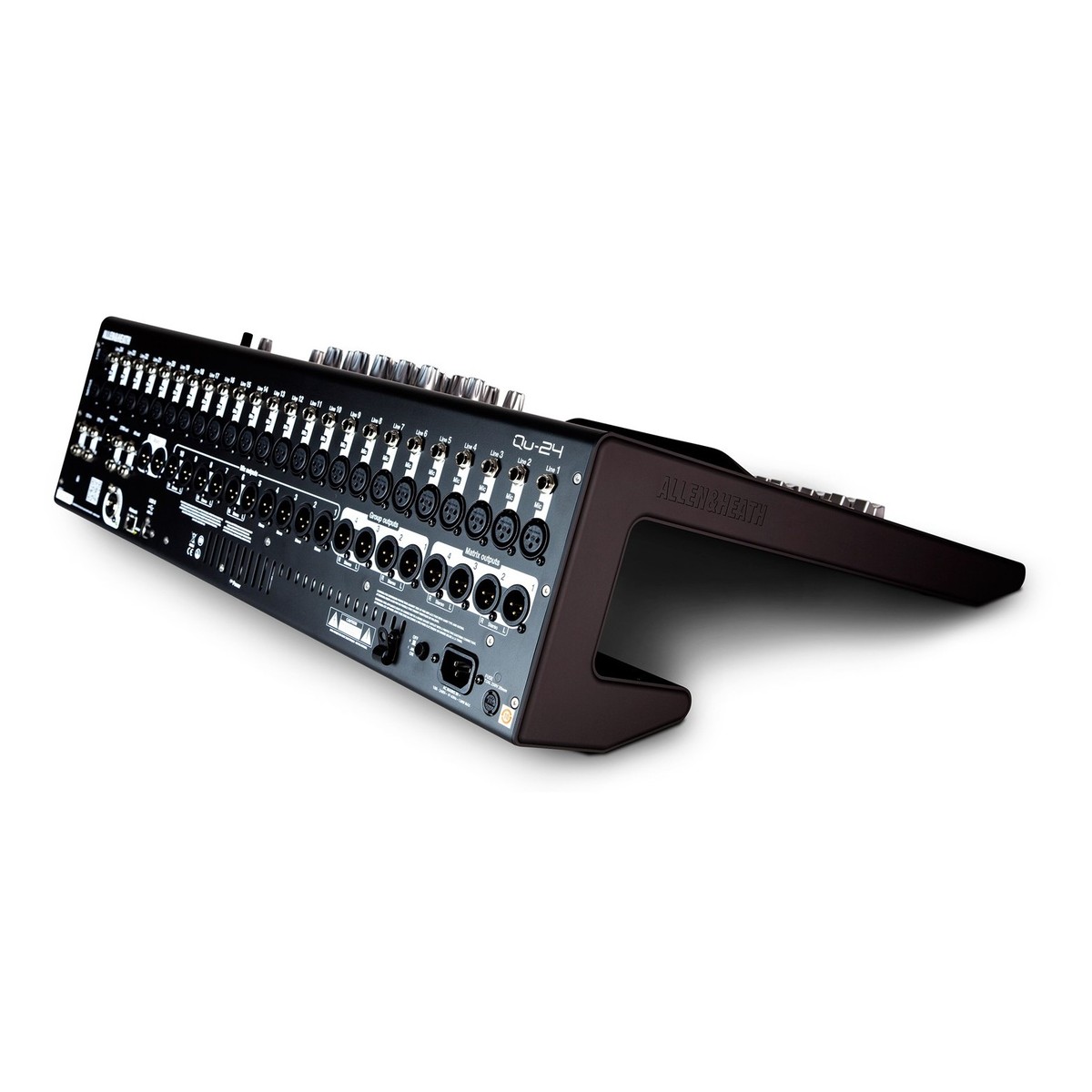 $2,303.00excluding VAT
1 in stockDelivery Information
Item in stock and available for dispatch

Innovative design meets unparalleled fidelity. Allen and Heath aim to provide you with the ultimate mixing experience thanks to the Allen and Heath Qu-24 Digital Mixer, Chrome Edition. Feel equipped to take on anything. The Qu-24 offers a grand total of 24, premium mixing channels, 25 motorised faders, and AnalogiQ preamps with instant recall. Like all digital mixers in the Qu series, the Qu-24 will provide you with direct multi-track recording, automatic mic mixing, ProFactory presets and a whole host of iOS and Android apps.

The chrome edition offers you powerful firmware updates, a stylish interface and chrome controls. Whether you're switching from analog to digital, or are simply updating your desk - the Allen and Heath Qu-24 is perfect for both live performance and studio applications.

V1.90 is a feature release of Qu mixers firmware. This latest update provides you with support for Qu-SB and ProFactory Library presets for industry standard Shure, Audio-Technica and Sennheiser microphones. V1.90 firmware also ensures various enhancements to your Qu-Pad iPad app, along with support of the new Qu-Control iOS app.

Allen and Heath teamed up with leading microphone manufacturers and top engineers at Audio-Technica, Sennheiser and Shure to create an extensive library of EQ presets. This vast library includes presets for vocals, electric guitars, acoustic guitars, drums, as well as brass and woodwind instruments. Whether you're a keen amateur or a seasoned professional, the Qu-24 digital mixer allows you to get to work quickly and easily, saving valuable time and allowing you to concentrate on EQ'ing the source and room acoustics.

The Qu-24's dynamics and effects are derived directly from the algorithms in the iLive pro touring series. Some of the world's most respected audio engineers have chosen to use iLive's FX on tour in preference to high-end plugins and external FX units.The same power is now at your finger tips. The Allen and Heath Qu-24 also boasts four stereo iLive FX engines, all of which feature emulations of legendary reverbs, gated reverbs, delays, modulators and more.

The fully-featured Qu-Pad app provides you with the ability to EQ and mix monitors from anywhere within the performance venue, while adjusting the PA and mixing the show from the heart of the audience. Qu-Pad connects to the Qu-24 digital mixer via Wi-Fi and delivers you instant access to all live mixing parameters and settings.

Qu-You allows up to seven performers to control their own monitor mix using any iOS or Android device. This application will make your job easier. Spend more time focusing on mixing for audience whilst allowing each musician to feel empowered at the chance to handcraft their own mix.

Qu-Control is a customisable iOS app which features a simple interface, designed specifically for novice users. This is ideal for when your regular, professional sound engineer is not around. The Qu-Control offers user-friendly and extremely effective control of all essential parameters.

The Qu-24 mixer features twenty-four AnalogiQ™ digitally controlled preamps with advanced zero-crossing detection and a padless 1dB-step gain stage. The analogue signal is captured by high-class, low latency 24-bit A/D converters, which are matched to 24-bit D/A converters to ensure the highest quality possible. The innovative AnalogiQ™ preamp design has been refined to deliver superb transparency, minimal distortion and an ultra-low noise floor, along with a warm and musical sound.

The Allen and Heath Qu-24 digital mixer provides you with the ability to save and recall Scenes (snapshots) by simply pressing a button. The Qu-24 is able to store up to 100 full scenes for instant recall while Channels or Mixes can be protected from being overwritten. Additionally the Qu-24 mixer features 25 motorised ALPS faders - 24 of which provide instant access to all input channels and masters over 2 layers, while a dedicated master fader dynamically follows the Mix section. A third User-defined layer can be used for ad-hoc strip layout, allowing you to assign any combination of inputs, FX sends, FX returns, DCA's and mix masters.

Thanks to the built-in audio interface, the Qu-24 allows you to stream up to 32 selectable tracks to your Mac or Windows computer. Additionally, returns from your computer can be easily assigned to any of the input channels. The interface is class-compliant when used with Mac OS X, providing you with true plug 'n' play operation and compatibility with any DAW supporting Core Audio, including Logic, Cubase and Pro Tools. For Windows computers, an ASIO and WMD driver is available to download. Finally the DAW Control driver is available which ensures easy setup and emulation of HUI or Mackie Control protocols on both Mac OS X and Windows systems.