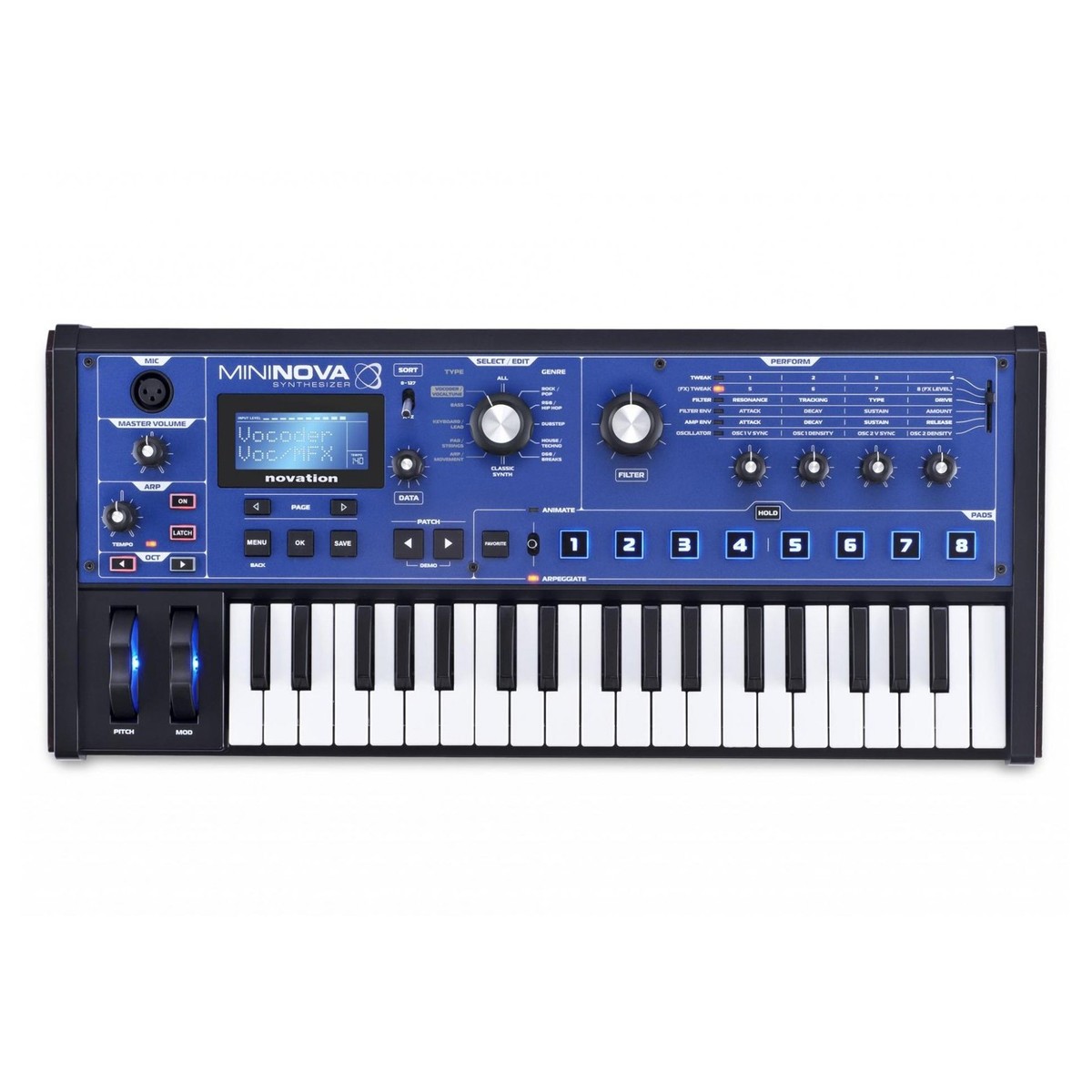 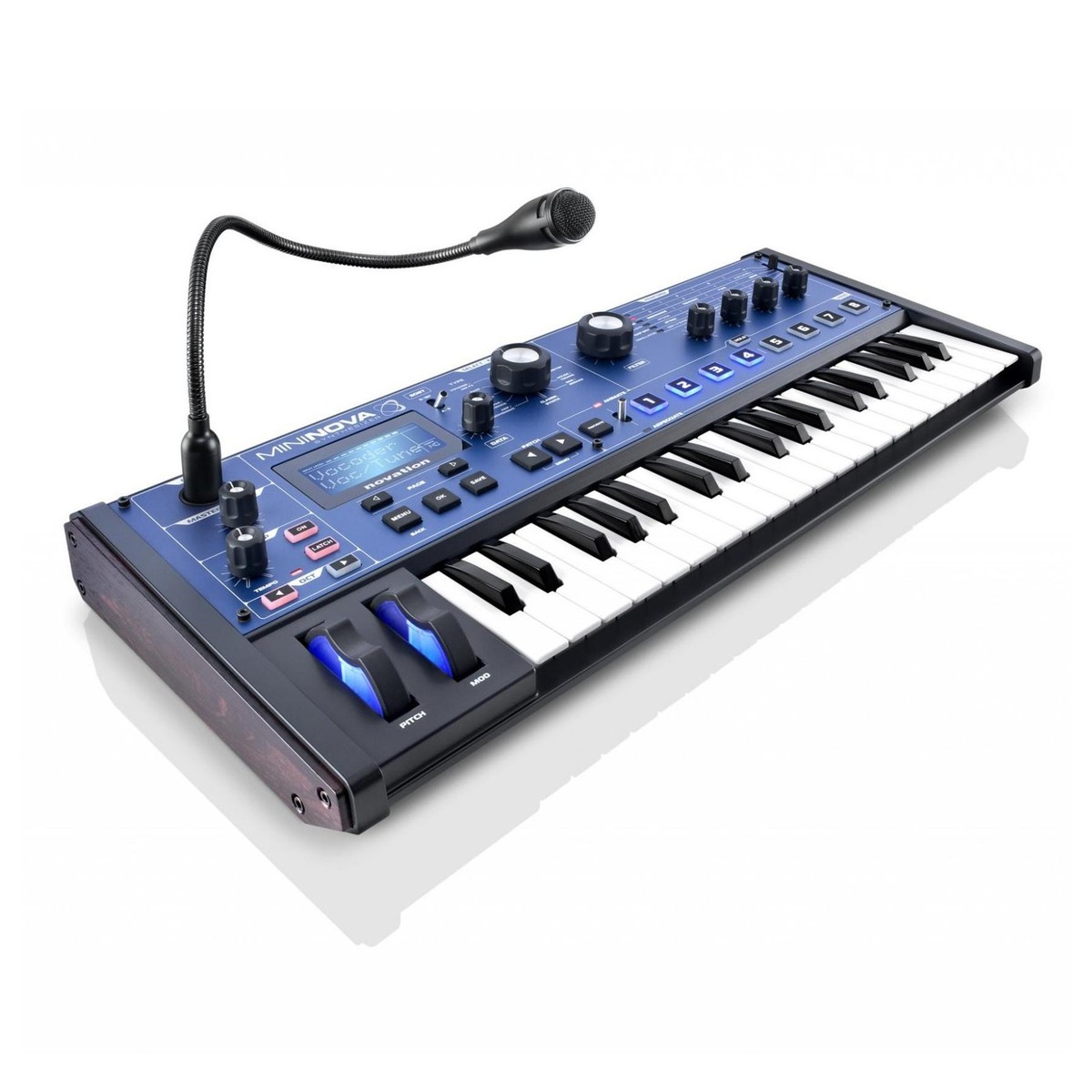 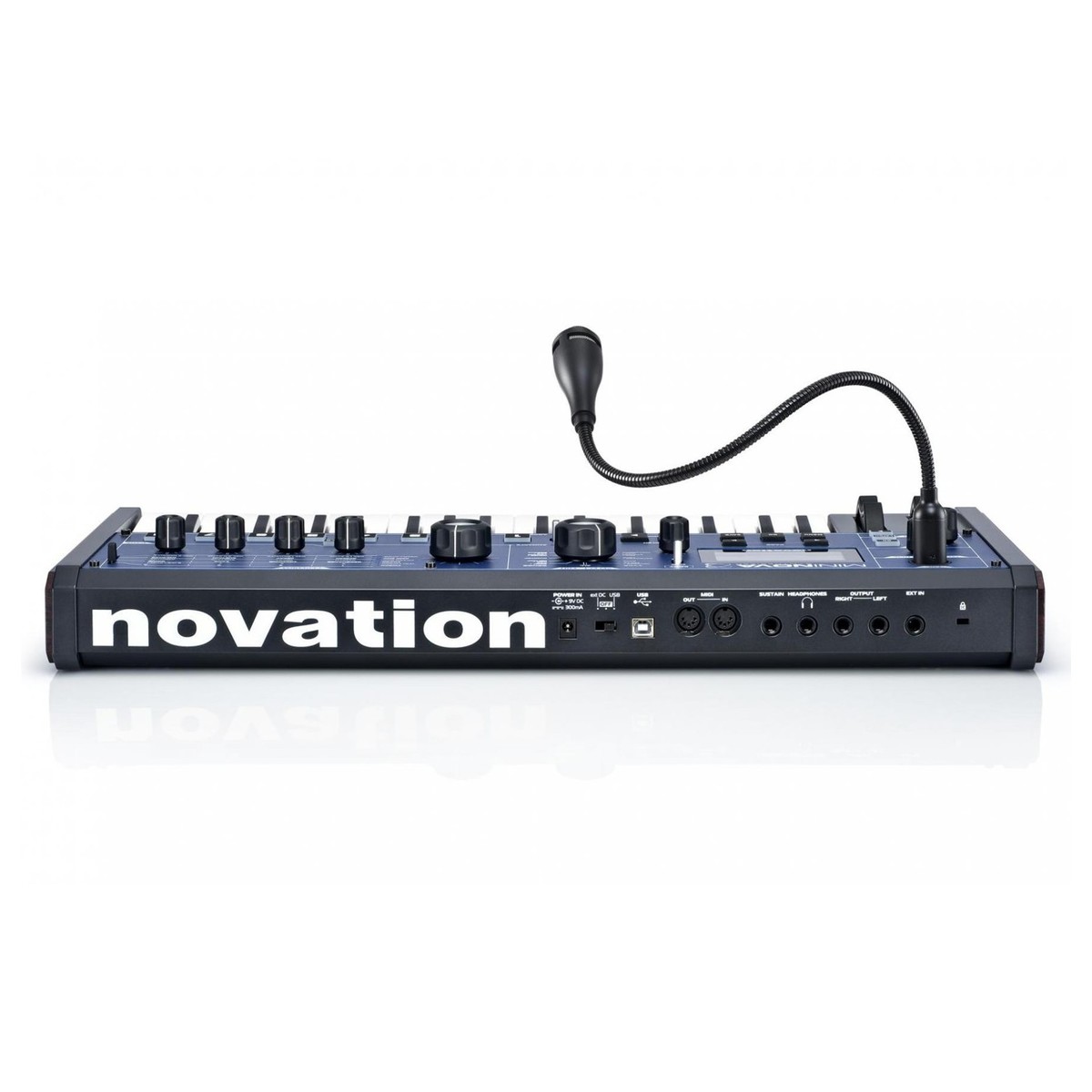 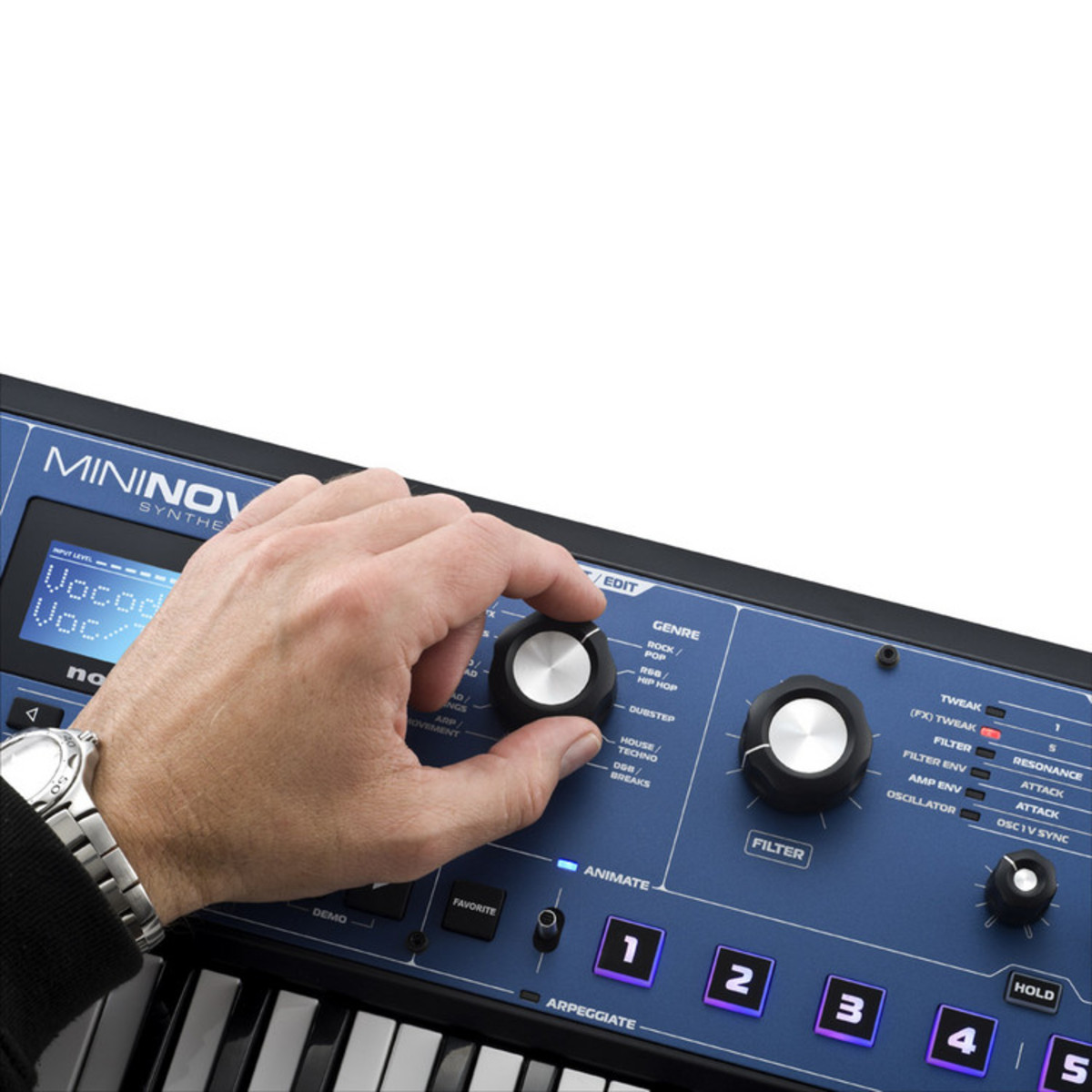 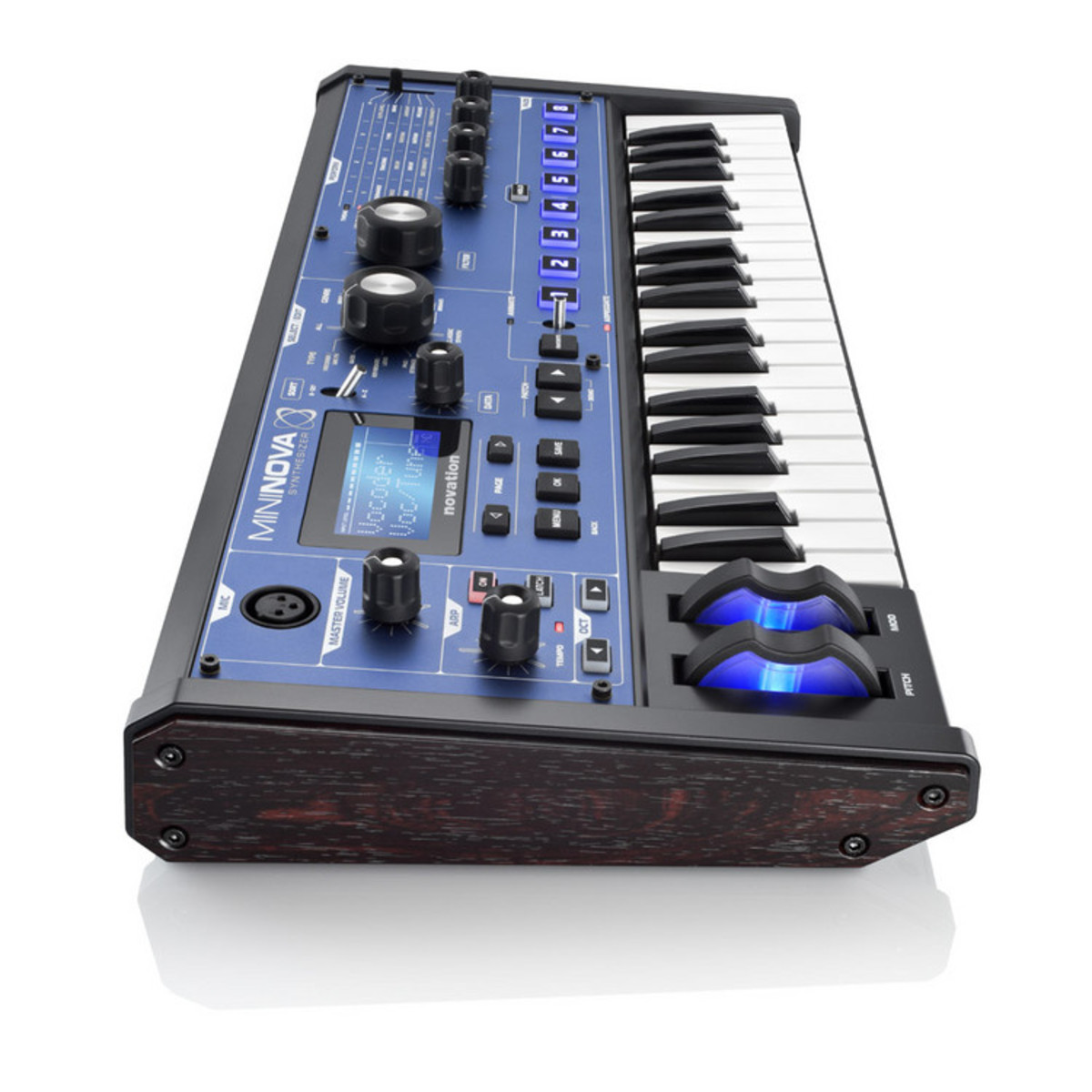 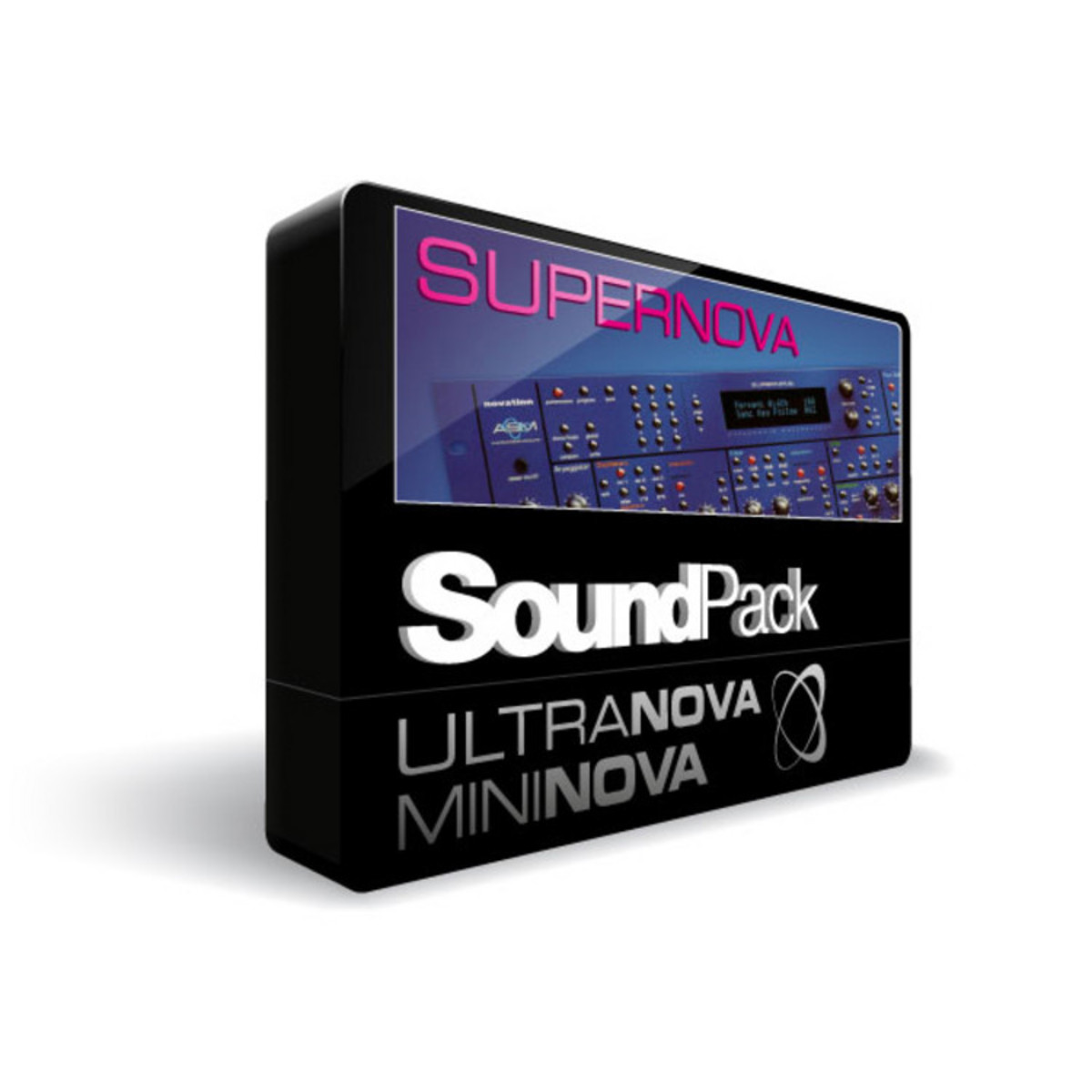 $351.50excluding VAT
Available for orderDelivery Information
Item on order with our supplier

Novation's compact MiniNova is a Mini-Keys Synth boasting 256 onboard sounds and massive sound and performance/editing controls as well as 37 keys and MIDI I/O making this a versatile compact synth that is ideal for producers and gigging musicians.

SPECIAL OFFER! - Owners of a Novation MiniNova or UltraNova can now download a FREE SuperNova SoundPack of classic sounds from the original SuperNova synth. To remind yourself what these sound like, listen to the MP3 below! Visit the Novation site for further info and to download - http://uk.novationmusic.com/soundpacks

The compact MiniNova is a superb performance synth with 256 incredible onboard sounds that you can tweak with 5 knobs, or totally warp with 8 'animate' buttons. MiniNova also has an onboard VocalTune effect as well as a classic vocoder so you can recreate iconic vocal sounds from Hip Hop, Urban and Electronic music amongst many others.

MiniNova also has space to save another 128 of your own sounds. You can quickly search for sounds by selecting the type of music you're making, or the type of sound you wish to use. Novation's MiniNova comes with a free software Patch Librarian so you can store as many sounds as you want on your computer if 256 is not enough. There are also numerous soundpacks for MiniNova assembled by renowned artists and sound designers.

MiniNova can do things other synths can't. It has knobs which allow you to tweak and edit the sounds, but it can also 'animate' sound with 8 back-lit buttons. These trigger 'mods' in the synth engine that can warp sound in incredible ways as you play. There is also a large knob for filter cutoff so you can get instant control of the filter whatever else you are doing. MiniNova has an arpeggiator; you can use the 8 buttons to jam with arpeggios creating totally new sequences in realtime.

MiniNova takes vocal effects one step further. As well as a vocoder, it has VocalTune. This means you can talk into the mic and play the tune you want your voice to follow on the keyboard recreating those classic Hip Hop/Urban vocal effects. You can also run your voice through MiniNova's effects engine, adding reverb, distortion, chorus/phase, gator compression or EQ. This doesn't need to be limited to your voice; there is an input into which you can plug a guitar or any other instrument and give it the same treatment; effects or vocoder.

MiniNova has an enormously powerful synth engine, unheard of in such a compact synth. There are 14 conventional waveforms to choose from (square, sine, sawtooth, pulse, triangle and combinations), 36 wavetable and 20 digital waveforms. Each of the 3 oscillators (per voice) have density/detune for fattening up sounds, virtual sync and 'hardness' - which acts as an additional lowpass filter. There are 14 filter types (and you can run 2 simultaneously), 6 envelope generators, 3 LFOs and 20 modulation slots where you can link modules of the synth engines together to shape sound. MiniNova can add up to 5 effects to each voice including distortion, reverb, chorus/phase, delay, compressor, EQ and Novation's unique gator effect.

Editing sounds in such a powerful synth can be overwhelming, so Novation have created a software application that gives you visual access to the synth engine. The MiniNova editor works as a plug-in within your DAW or music software. You can fully edit MiniNova using the hardware, the software just makes it more simple to see what you are doing.

"If you're into electronic music with a tough edge, love deep sound design and need something that's super-portable yet well built at a reasonable price, then the MiniNova is very appealing." - MusicRadar

"This is a highly compact and prtable version of the UntraNova which sacrifices none of its impressive sonic weaponry." - Sound on Sound

"A good prospect for those just wanting to get a first synth and access to some contemporary synth sounds, or a more experienced user who wants to Nova synth engine, but doesn't need all the keys and control." - Sonic State

For further information about the Novation MiniNova, please download the PDF from the link below.