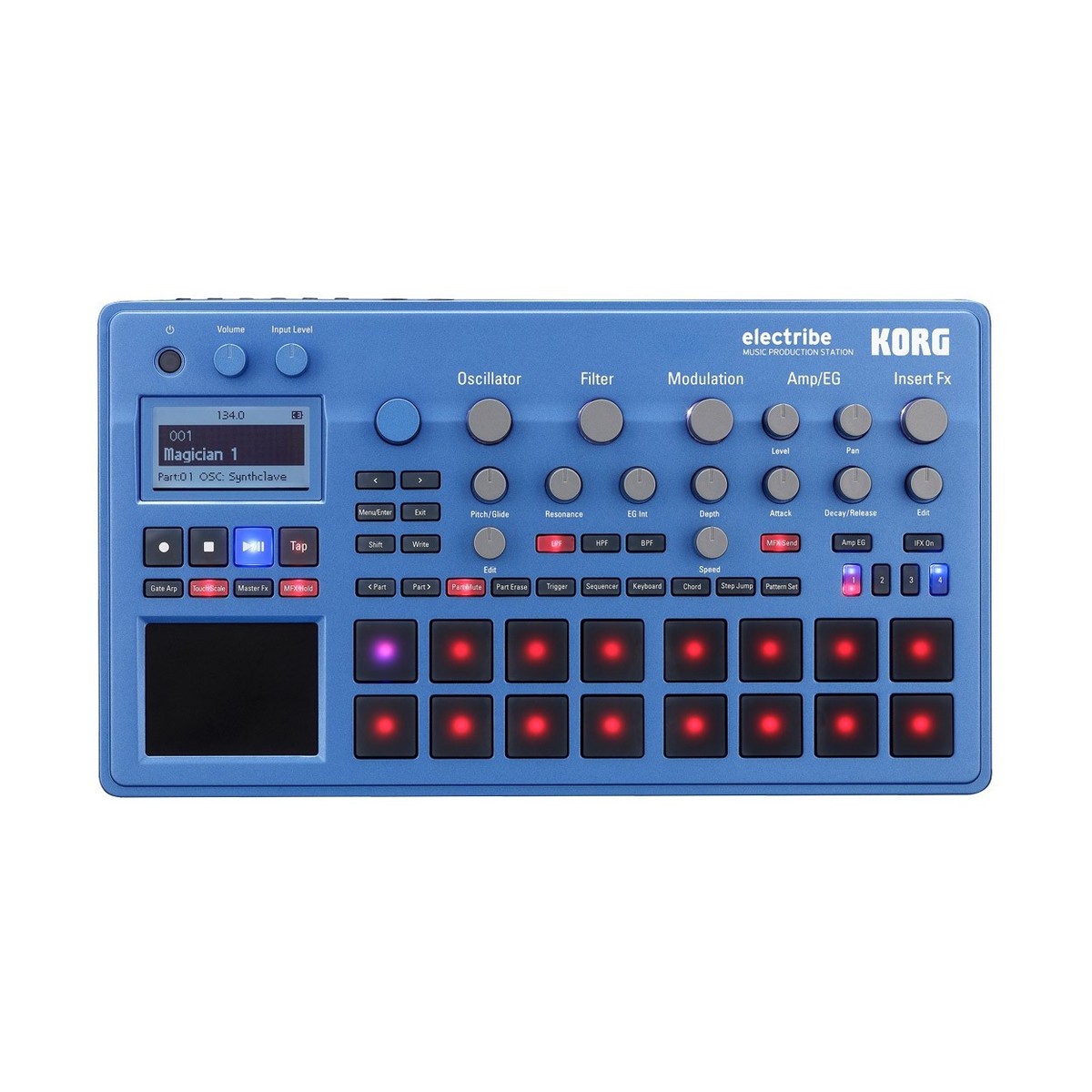 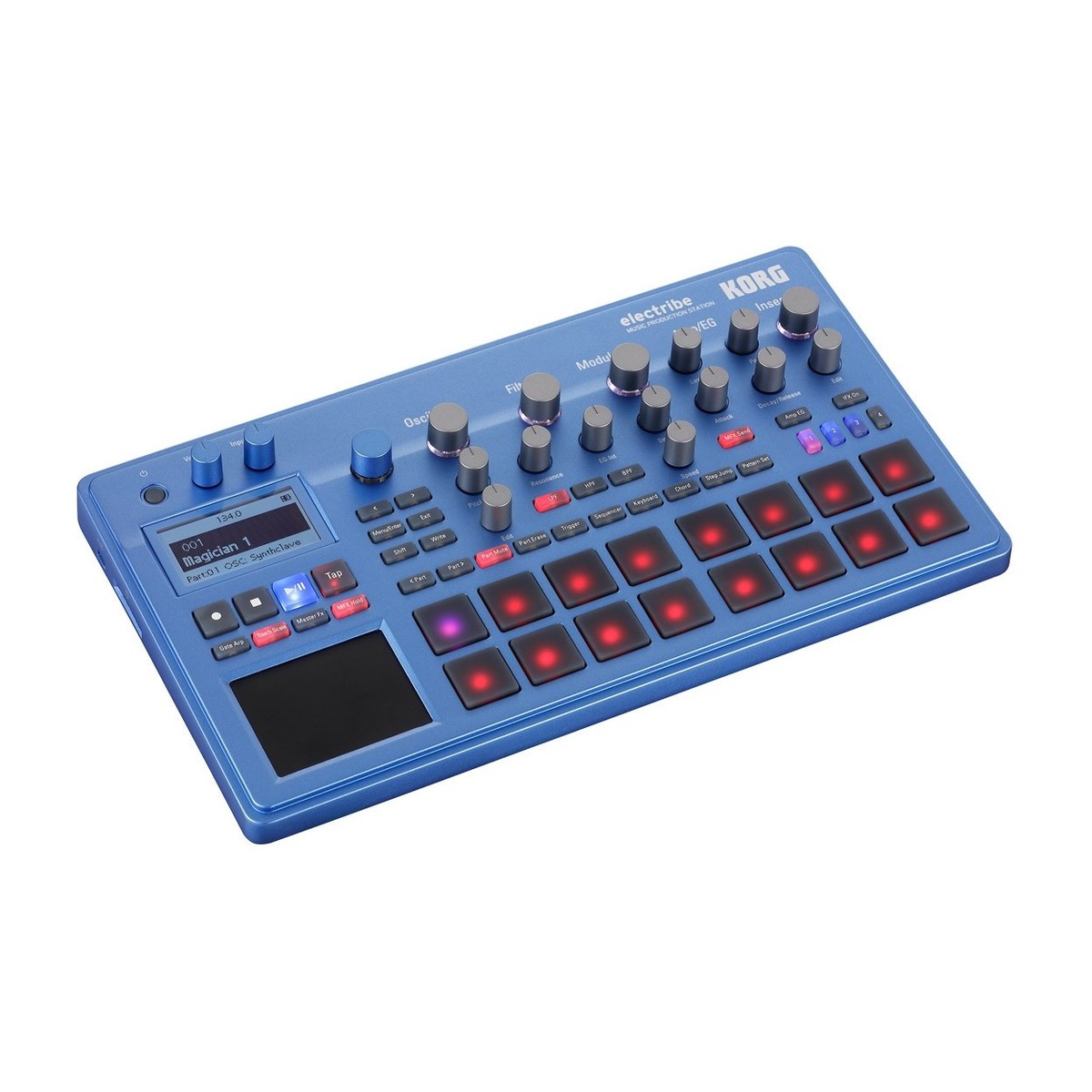 The Korg Electribe EMX2-BL Music Production Station is designed to be simple and easy to use for beginners, while still offering plenty of effects and tweakable parameters that even a seasoned producers will enjoy. Ideal for live performances and music production, the Electribe features an evolved step sequencer, trigger pads and touch pads, synth engine and effects and groove templates. With a metallic blue finish, the EMX2 comes with an updated system, a range of live performance features, and Ableton live lite so you can start creating your music straight away.

Along with a new colour scheme, the Electribe has an ungraded system that adds support for a pattern chain function and undo function, a great asset for live performances. Along with a system update, Korg has provided over 200 new patterns for a variety of musical styles.

The unit has 16 pads placed on the front of the unit which let you create patterns intuitively whilst hearing and seeing the sounds. Use the pads as a keyboard to record phrases in realtime and perform step recording by entering the pitch and rhythmic value one note at a time. The patterns you create can be used in alternate forms as you perform by taking advantage of the "step jump" feature inherited from the volca series, or by changing the "last step" to vary the length of each part. There's also a "motion sequence" function that lets you record knob and button operations and use them in the pattern that you create. Either drums or synths can now be assigned to each of the 16 pads. For example you could create complex rhythms by assigning drums to all of the 16 parts.

The "touch scale" function lets anyone perform without wrong notes, just by moving a finger across the touch pad. The trigger pads make it easy for anyone to create phrases intuitively and can also be used for drum input. Settings allow you to switch velocity on/off.

The Electribe's 200 preset patterns cover House and Techno as well as dance music genres such as Trap and EDM. Another major evolution is support for polyphonic playback, which is indispensable for musical styles that involve complex chord progressions such as House music.

The filters at the heart of the sound-shaping capabilities are inherited directly from the KingKORG, and they use algorithms that simulate standard synthesizers so you can get "the sound" used in famous songs.

Modulation is easy - simply select a template that specifies an effect and its target and then adjust the speed and depth to suit.

Advanced Use of Samples

The "Time Slice" function detects attacks within the phrase and slices appropriately, allowing you to play the phrase at the desired tempo without significantly affecting the sound. Sounds within a sliced part can also be used separately by assigning them to steps or parts. You can even apply an effect to a sample and then resample it while using the knobs to vary the pitch or modulation.

The Korg Electribe Sampler provides effects such as compression and overdrive for each part, giving you uncompromising control over the nuances of individual sounds that differ subtly between genres. The groove function can be specified for each part, letting you apply a groove to your phrase simply by selecting a template.

The master effects of the Korg Electribe Sampler can be controlled from the touch pad, and they include spatial-type effects that shape the overall acoustics plus effects that apply aggressively musical transformations such as the "Vinyl Break" effect inherited from the Kaoss pad series, and the newly developed "Seq Reverse" and "Odd Stepper" that change the playback order of the sequencer. These are extremely effective for live performance. Insert effects can be assigned for individual parts, opening up even more complex sound-design possibilities.

There's also a "pattern set" function which lets you switch patterns by pressing trigger pads, and an "event recording" function that records that performance. In addition to MIDI IN/OUT, "Sync IN/OUT" is also provided, allowing synchronized performances with the volca series, monotribe, or MS-20 mini. The unit can run on six AA batteries.

KORG has collaborated with Ableton to offer a new music production workflow that combines the best hardware and software. The Electribe Sampler can internally save and export patterns in Ableton Live format. Individual patterns and parts are saved as scenes and clips in an Ableton Live Set. Use Live's powerful Session and Arrangement workflows to edit, arrange and refine your ideas, perform or record new parts and mix your song. The KORG electribe sampler includes Live Lite.