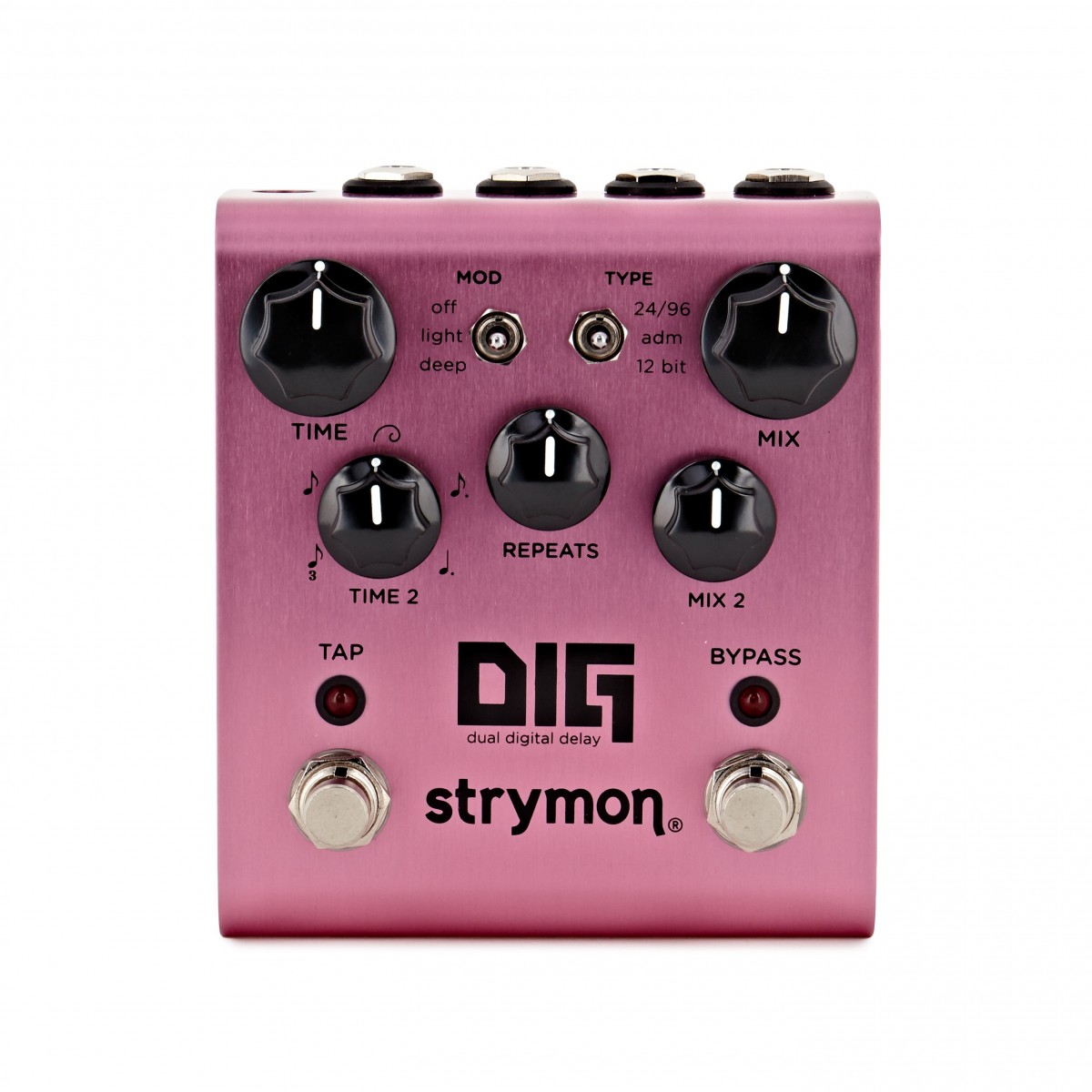 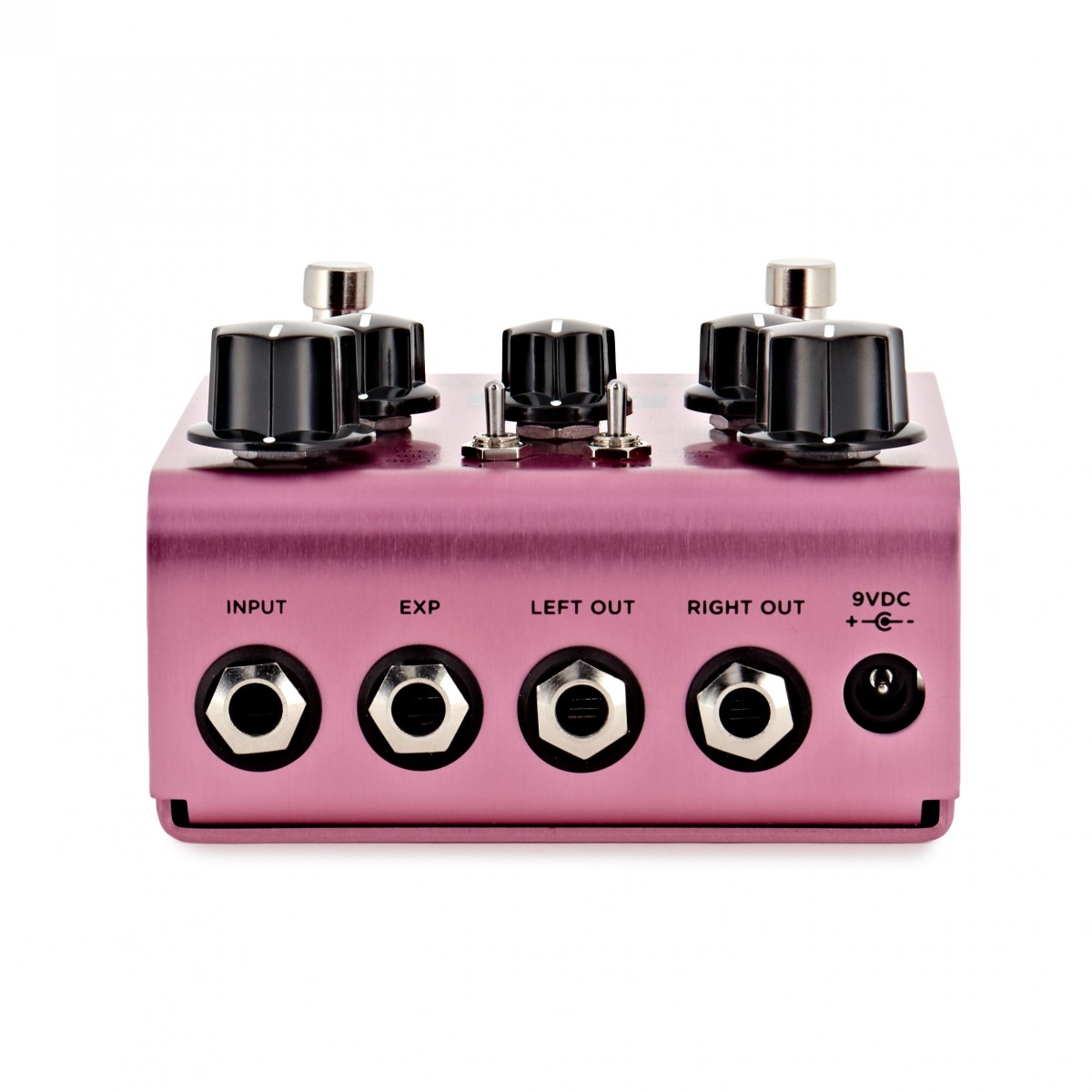 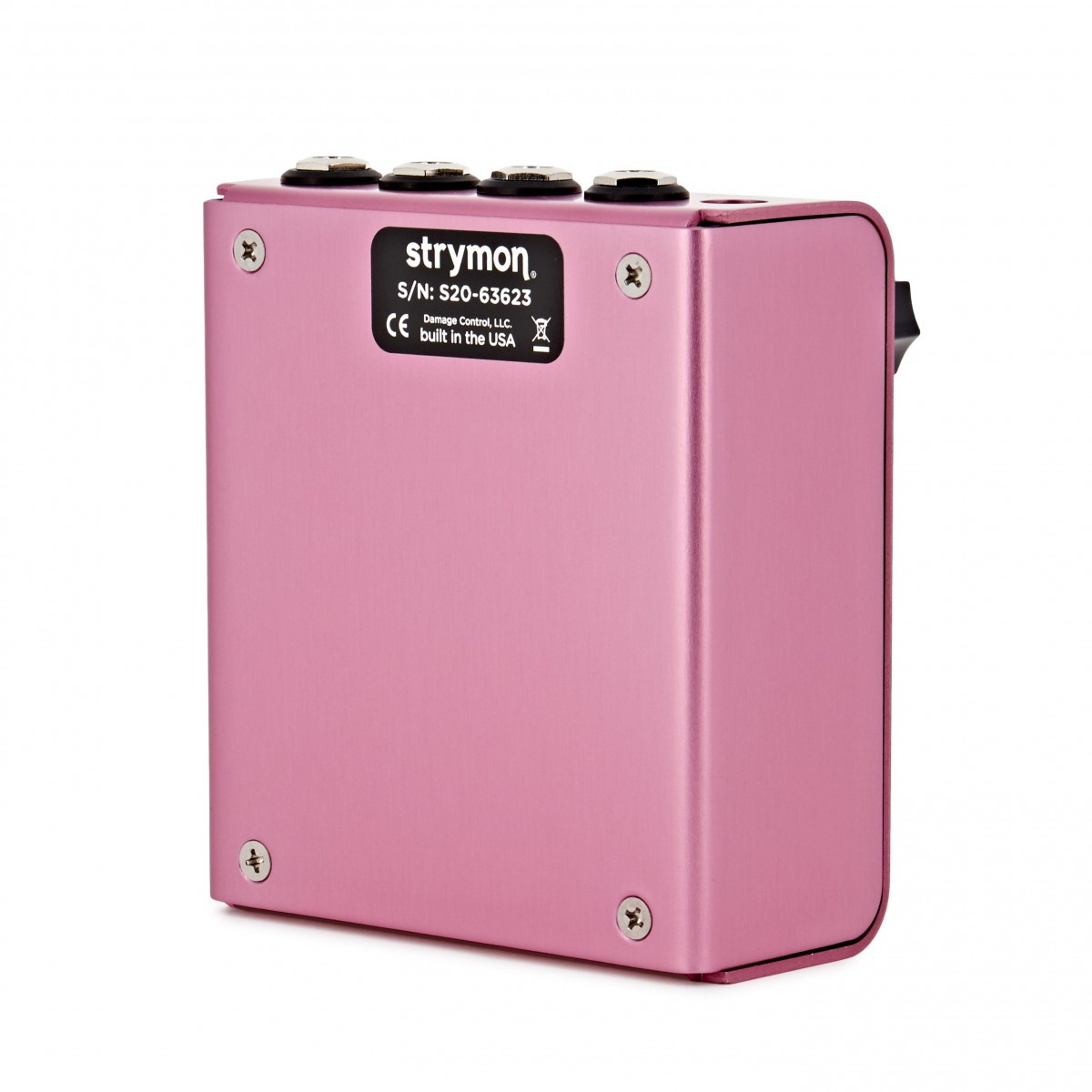 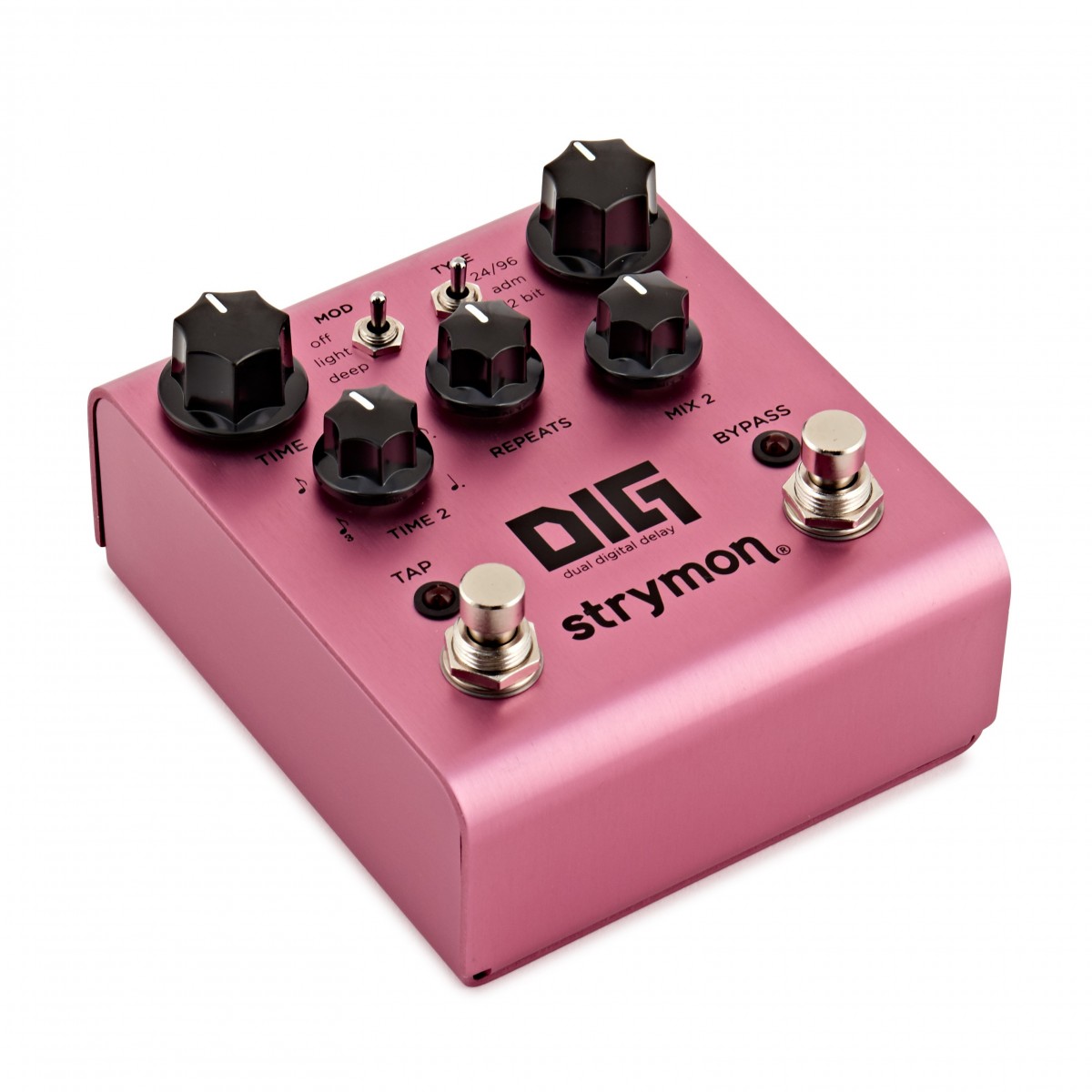 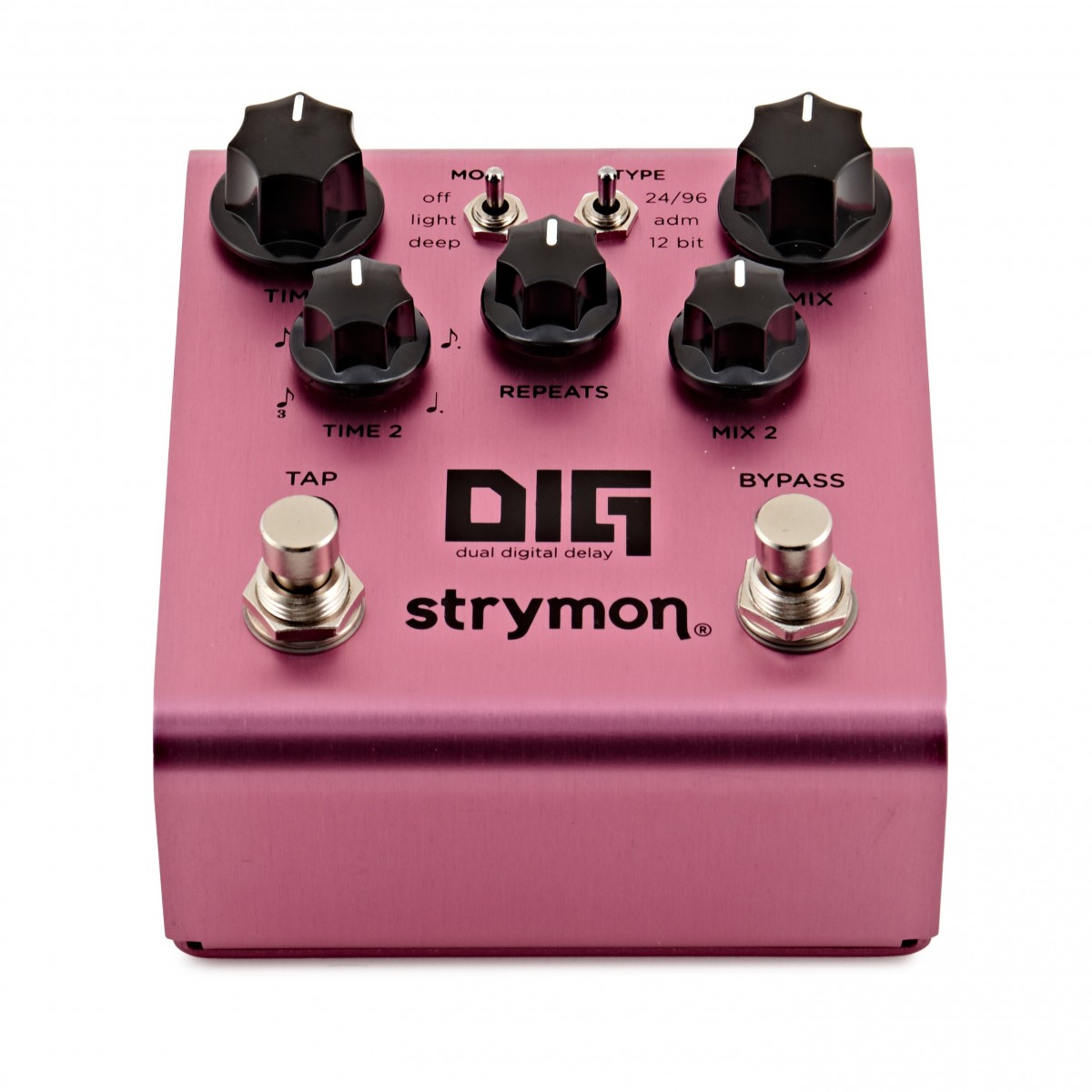 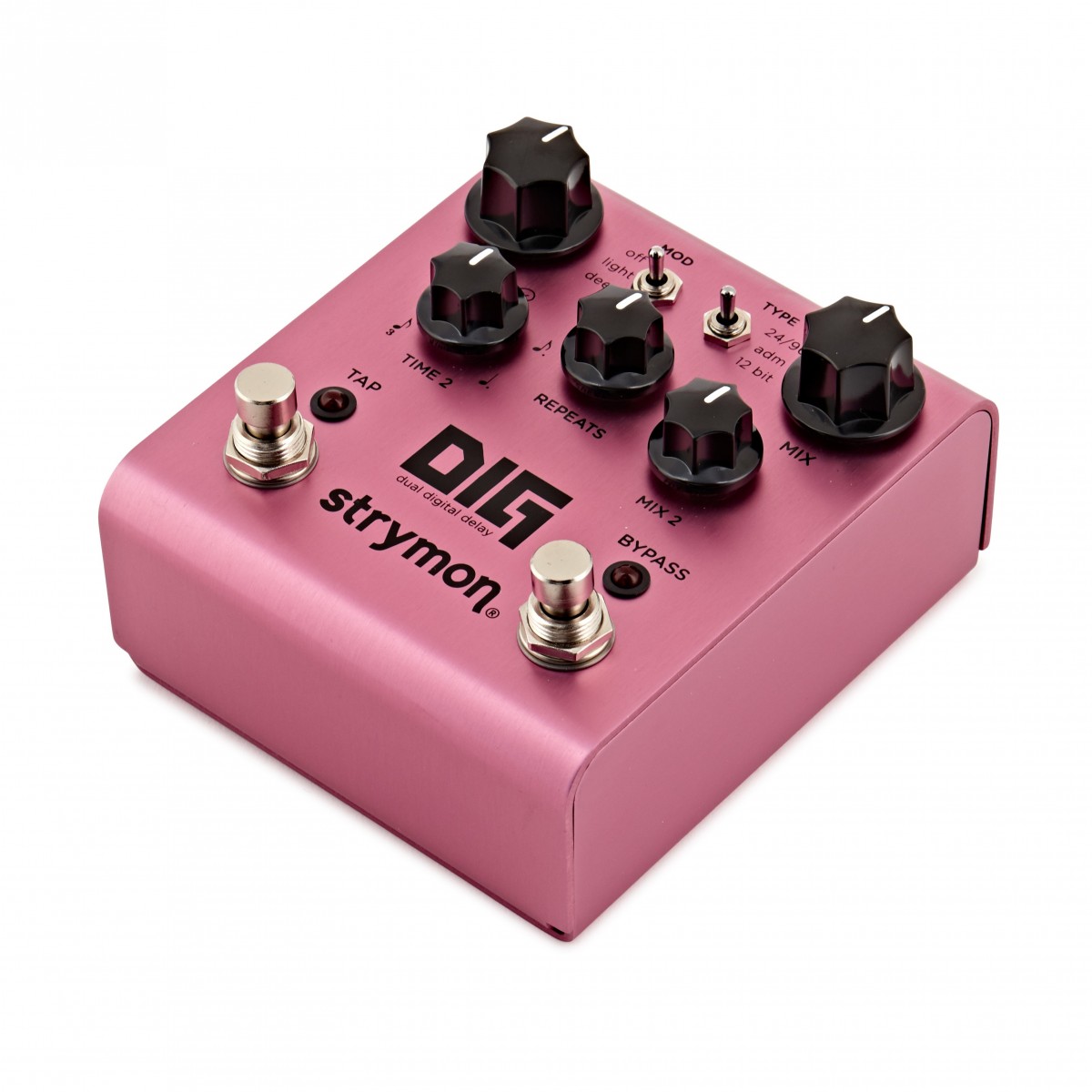 The Strymon DIG Dual Digital Delay is a guitar pedal that offers a range of unique digital delays to select and shape from - allowing you to find your perfect sound. With two simultaneous delays affecting your sound, the pedal not only acts as a delay, but also provides the effect with plenty of atmosphere - creating a reverb inspired soundscape.


With five control knobs with secondary functions, the pedal gives you fantastic control over shaping the delays to suit your sound. Strymon have also given the DIG the ability to make the secondary delay become independent from the master delay - this allows you to manipulate the pedal to create a flange and chorus-like voice.

A new world of delays

With several control knobs and two simultaneous delays that can be manipulated, the DIG can create a range of different delays. The pedal features three different delay types to choose, the first being a modern 24/96 delay that creates pure, high resolution digital delays with subtle dynamic processing. The second type is an early 80s adaptive delta modulation offering snappy, percussive delays, while the 12-bit pule code modulator creates dark, warm delay tones. Also featuring the ability to add modulation to the delay line, and five subdivisions, the DIG an deliver delays ranging from syncopated pulsing delays to spaced out echo trails.

Strymon’s DIG pedal uses two simultaneous delay together to give the effect plenty of atmosphere. By using the two together, it sounds full and well-rounded, whilst offering the ability to create new sounds and styles. The master delay can range from 20ms to 2600ms, offering slapback type delays to huge echoes. The second delay follows closely behind the master delay, but can be altered via the control knobs to create intricate echoes and atmospheric repeats – it can also be set to become independent from the first delay, creating a chorus or flange delay sound.

The Dig Digital Delay pedal features five control knobs with secondary functions to give you as much control over shaping the three different delays. The secondary functions can be accessed by holding down both footswitches and then turning the desired knob.

The Mic control is used to dial in the amount of wet/dry mix for the master delay, whilst the secondary function becomes the filter control to dial in the feedback filter response. When set to the left in this mode, the pedal delivers a high cut filter response, while the centre position produces a flat response, and when dialled to the right, offers a low cut response. The time 2 control sets the amount of rhythmic subdivision between the two delays, offering Triplet, Eighth, Golden Ratio, Dotted Eighth, Dotted Quarter. Its secondary function is used to enable and disable the time sync and subdivisions, allowing the second delay to be separate from the master delay.

This control knob set the amount of repeats both delays have, whilst its second function only affects the second delay. When turned full to the right when using the secondary function, the number of repeats for the second delay ties with the number set for the first delay. Mix 2 is used to control the amount of wet/dry mix for Delay 2, allowing you to adjust how much your guitar is affected by the second delay. The secondary function lets you alter the configuration of the delay signals routing, giving you the option to choose between series, ping pong, and parallel.