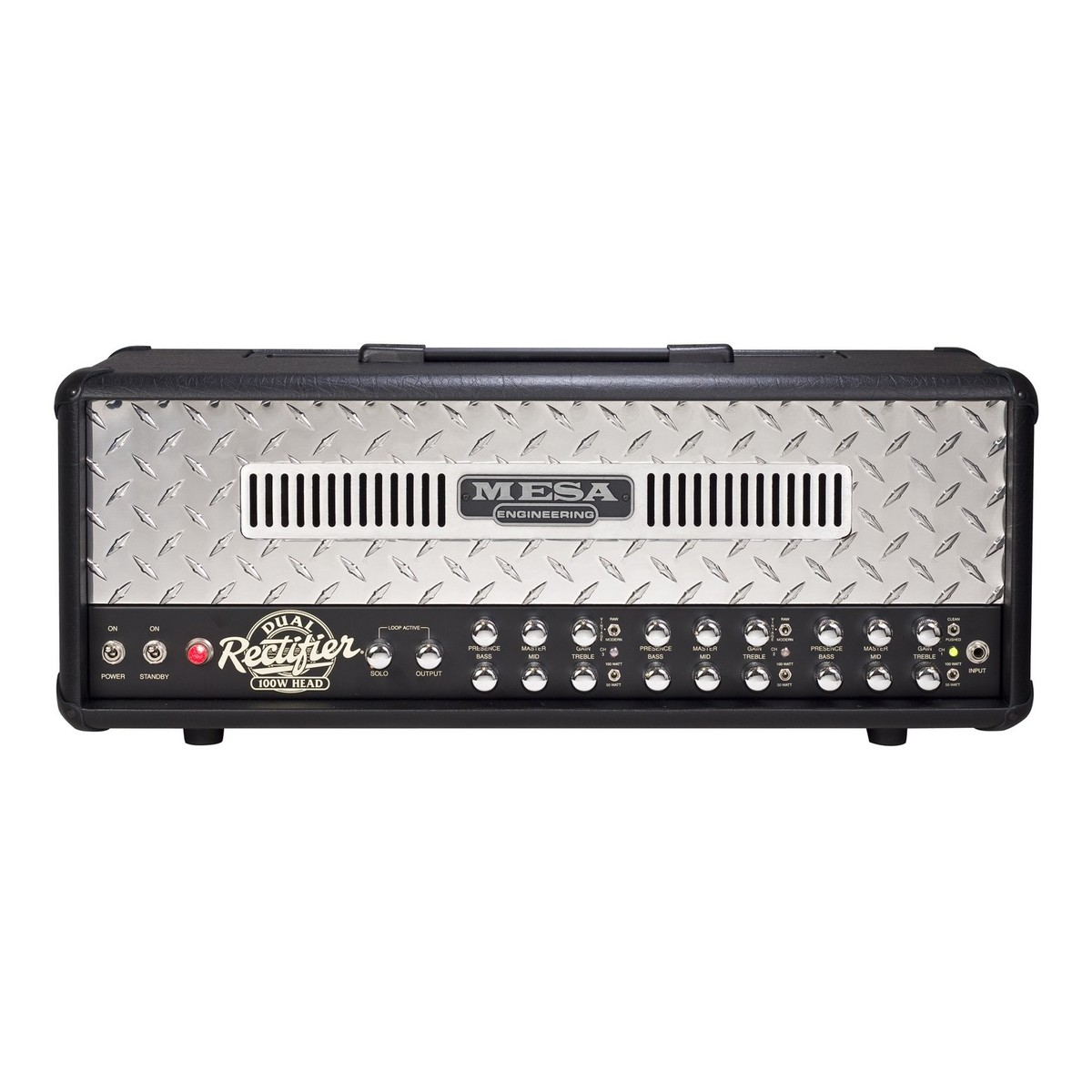 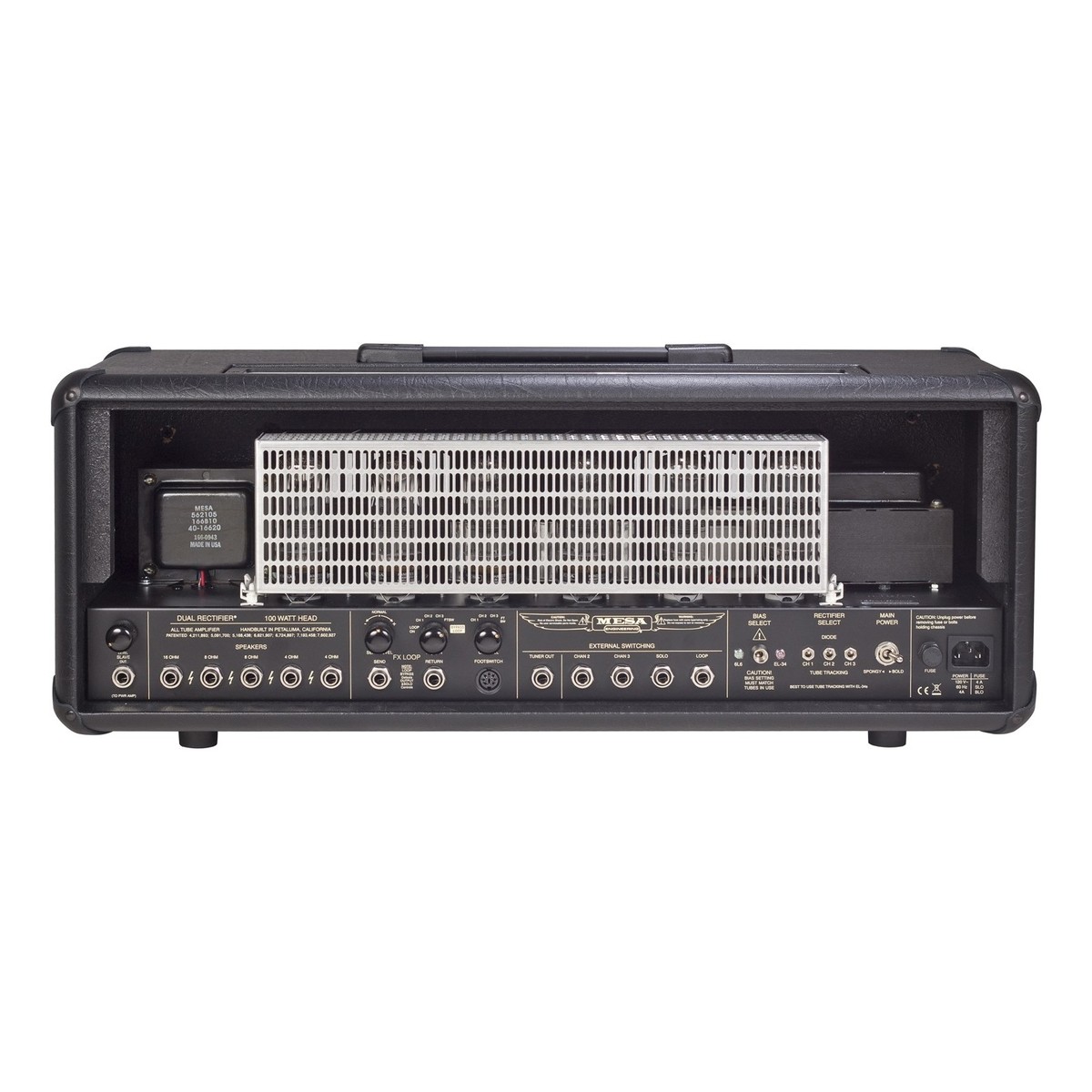 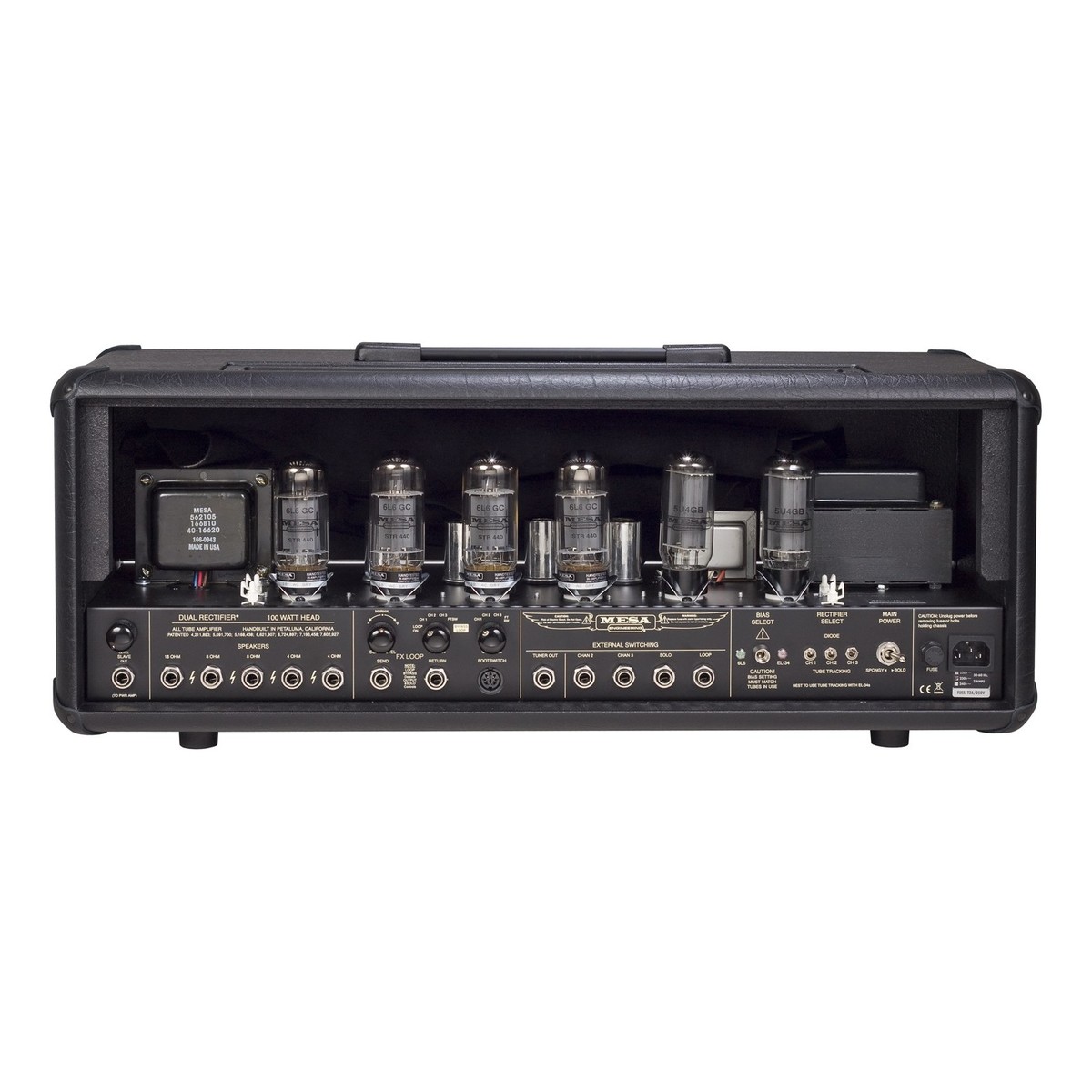 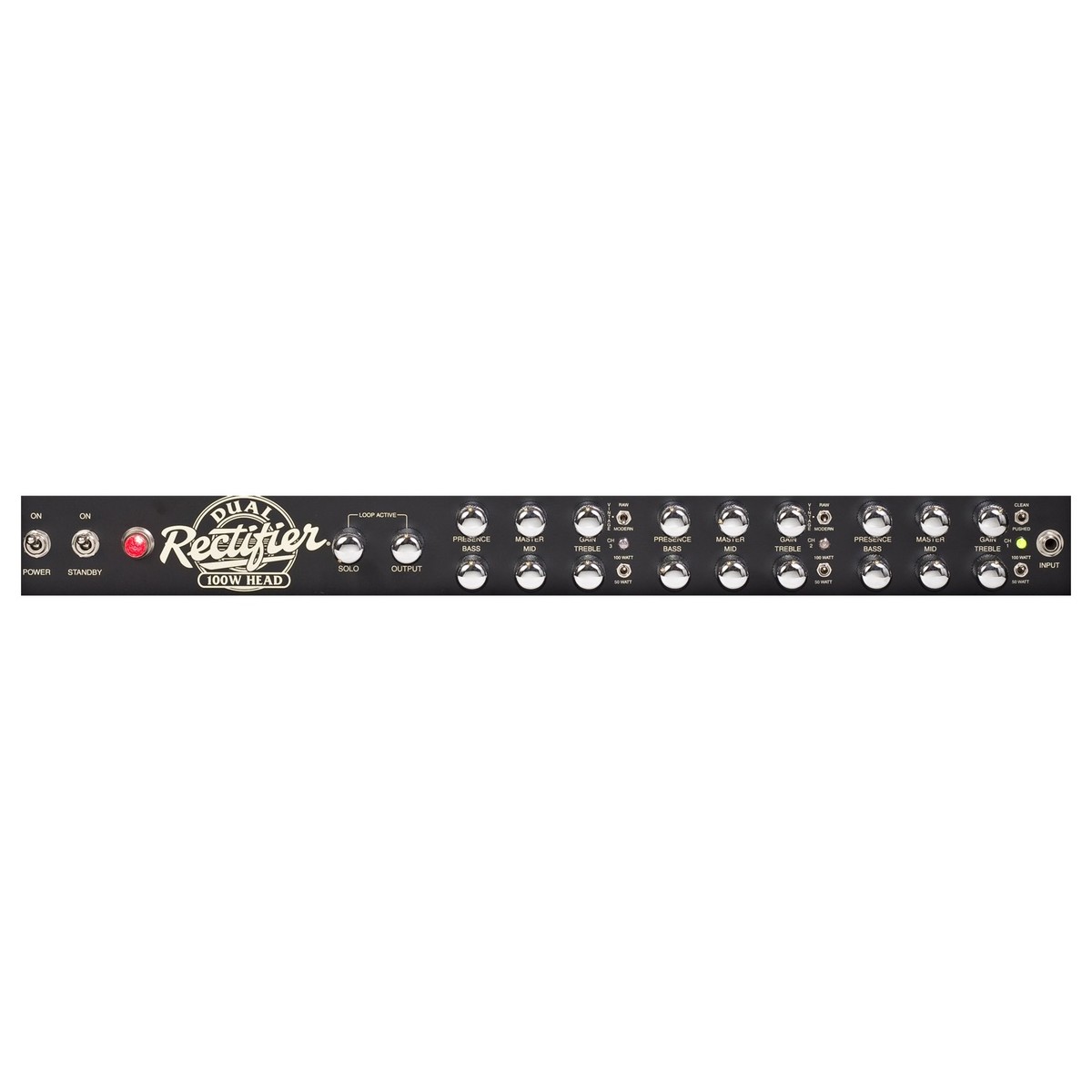 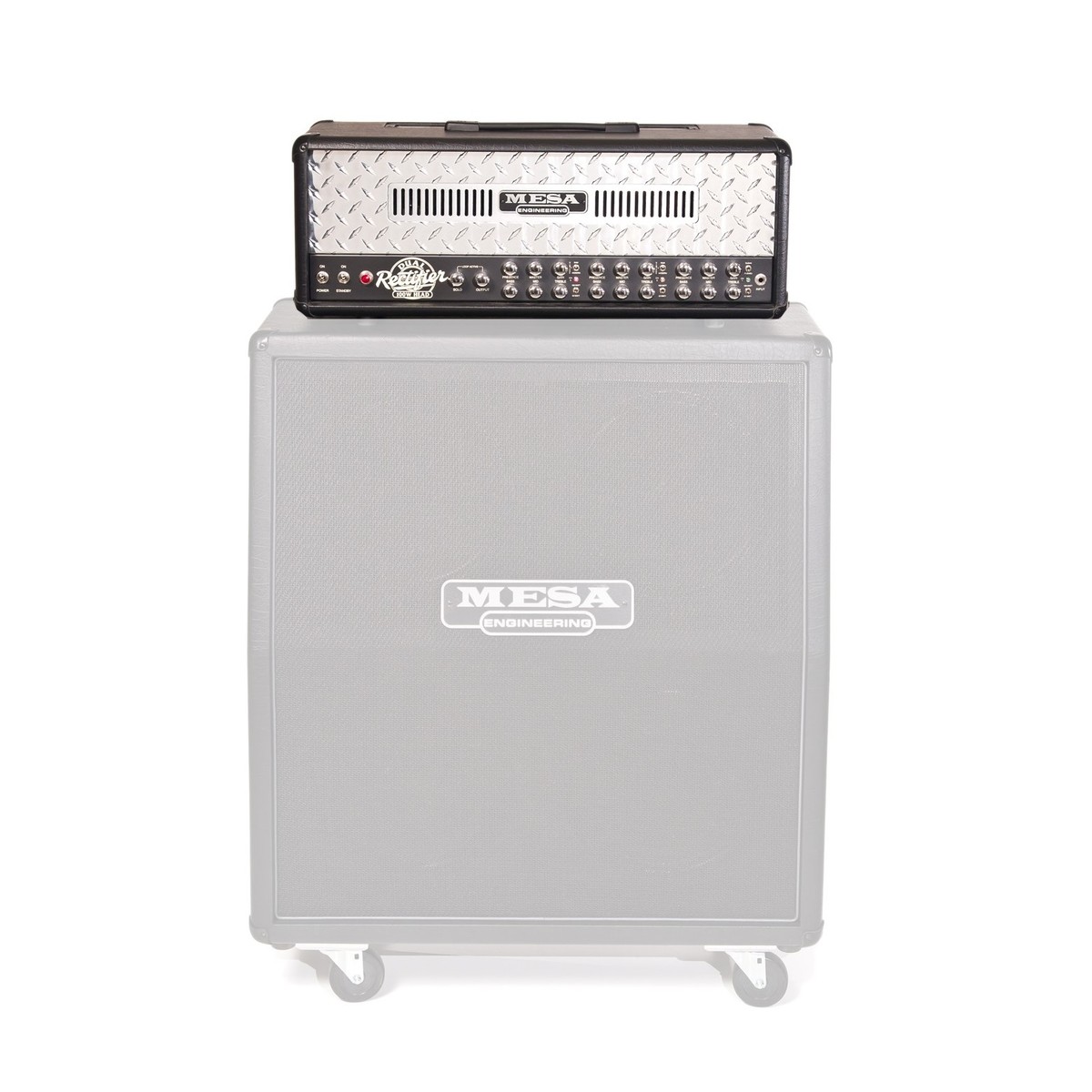 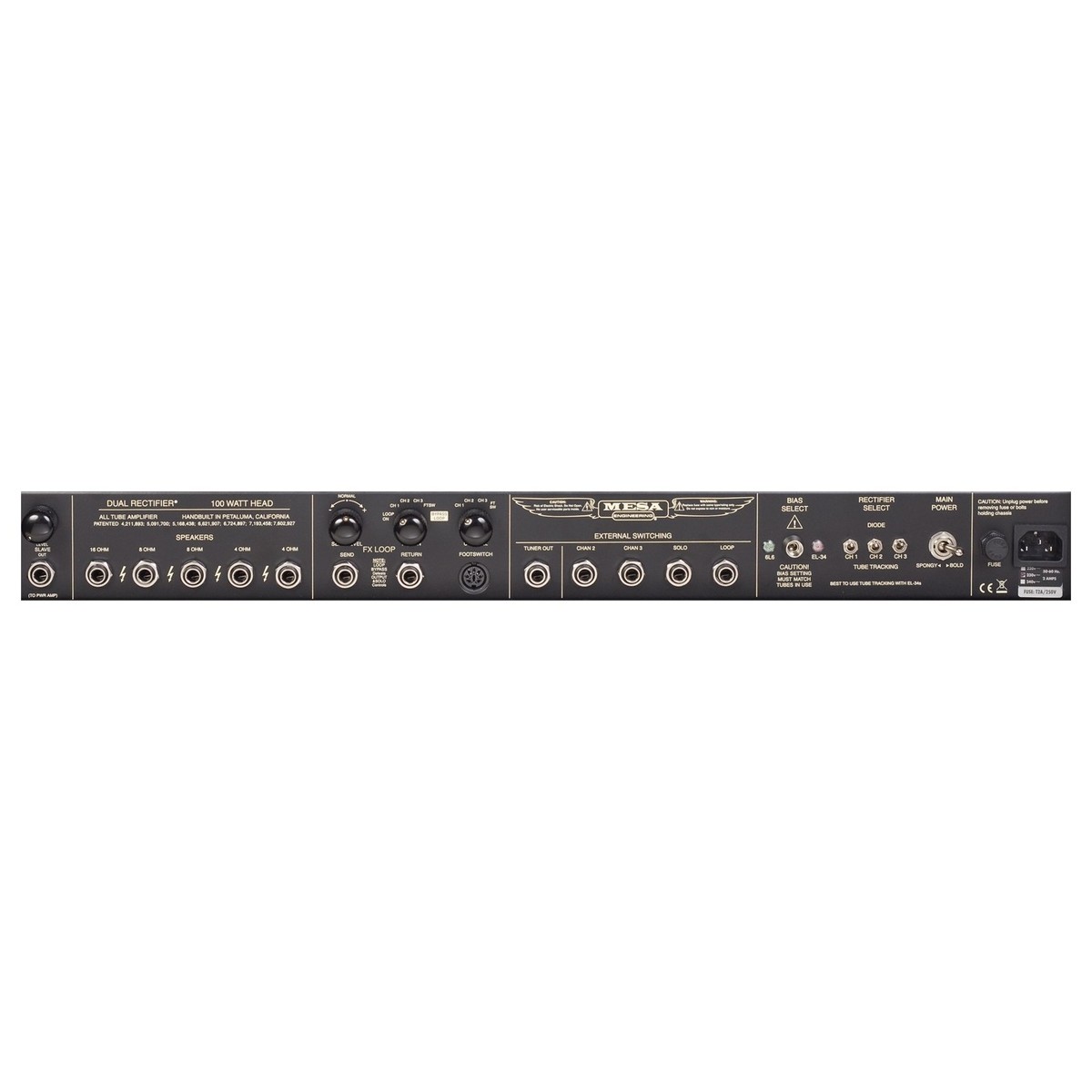 The Mesa Boogie Dual Rectifier Classic Head is one of the most iconic Mesa Boogie designs, having forged its name in rock and roll history since its inception in 1991. The amplifier provides 3 channels and multiple voicing options for incredible versatility and the ability to adapt to any genre of music. Over the past 3 decades, the Dual Rectifier has become synonymous with rock and metal music, but it can perform equally well in any style of music. With 100 watts of valve power, extensive connectivity, and the option to change the rectification type on each channel, the Dual Rectifier is a thoroughly professional amp that can dominate any stage or recording session. The new Classic head features 50/100-watt switches on each channel for the optimum headroom and response, a separate master solo volume level for an instant preset boost, and improved channel voicings for even better tones. An FX loop and multiple cabinet options allow you integrate with any rig, while the capable 6-button footswitch gives you extensive remote control over many of the amp's functions. If you need the ability to create any sound imaginable and perform on any size of stage or on any studio session, the Dual Rectifier will allow you to join the multitude of players who have found their sound with this iconic amplifier.

Since 1991, the Mesa Boogie Dual Rectifier has made its name as the ultimate rock and metal guitar amplifier head, capable of dominating any stage or studio and creating any tone imaginable. The Classic Dual Rectifier features improved channel voicings and multi-watt capability, giving this iconic amp even more functionality.

3 completely independent channels give the Dual Rectifier an extensive range of tonal possibilities. Each channel has an incredibly musical 3-band EQ plus presence, alongside gain and level controls to fully sculpt your sound. The addition of a voicing switch, one per channel, massively influences the sound and response. Channel 1 features a Clean/Pushed switch, for a pristine clean sound or an edge-of-breakup overdrive sound with a vintage flavour. Channel 2 and 3 feature a Raw/Vintage/Modern switch which provide incrementally higher gain levels, letting you access vintage, '80s, and contemporary distortion sounds. With a total of 8 modes, the Dual Rectifier can adapt to any genre of music and overdrive sound imaginable.

The 6L6 valves deliver a huge 100 watts of sound with stunning headroom. Each channel also features a multi-watt 50/100-watt switch, so you can craft the ideal level of headroom and breakup. On the rear panel, you can choose each channel's rectification type including Diode and Tube - Diode has a crisp attack and fast articulation while Tube provides more sag for a vintage-style response. A master power Bold/Spongy switch changes the final amp response, all combining to give you unparalleled tonal control.

The Dual Rectifier is designed to integrate with any rig, with a range of connections for professional performance. Multiple speaker outputs and a slave-out allow you to connect to the cab(s) of your choice, while the tuner out, FX loop (switchable per channel with send-level), and switchable bias (EL34/6L6) give the functions needed to switch valves in an instant and create a professional live/studio rig.

Guitarist Magazine gave the Dual Rectifier 5 out of 5 stars!

"Rarely has Guitarist been quite so impressed. PROS: Killer looks, awesome power and a range of tones that would satisfy almost any player...

We can't fault Randall Smith and his team on their thinking and the application of features here. It's an astounding piece of amplifier engineering... the Dual Rectifier Solo head and matching 4 x 12 cabinet provides gargantuan power, awesome looks and truly inspiring features...

We say it's worth every penny and advise any doubters of its range of fabulous tones to check one out urgently."

Read the full review on the Music Radar Website

Petaluma-based Mesa Boogie is an American amp manufacturing company, established in 1971 by Randall Smith as a small repair shop. After producing amplifiers for prominent early customers including Carlos Santana and Ron Wood, Mesa Boogie quickly gained a reputation as a high-end amp designer with its iconic Mark Series amplifiers, still produced today. Mesa Boogie is now a prolific company with a key range of amplifiers including the Mark series, the Rectifier series, and the Express line. With players in all genres from progressive metal to blues, rock, jazz, alt-rock and more, Mesa Boogie is widely regarded as one of the ultimate premium amplifier manufacturers, with a huge fan-base and diverse range of professional players.