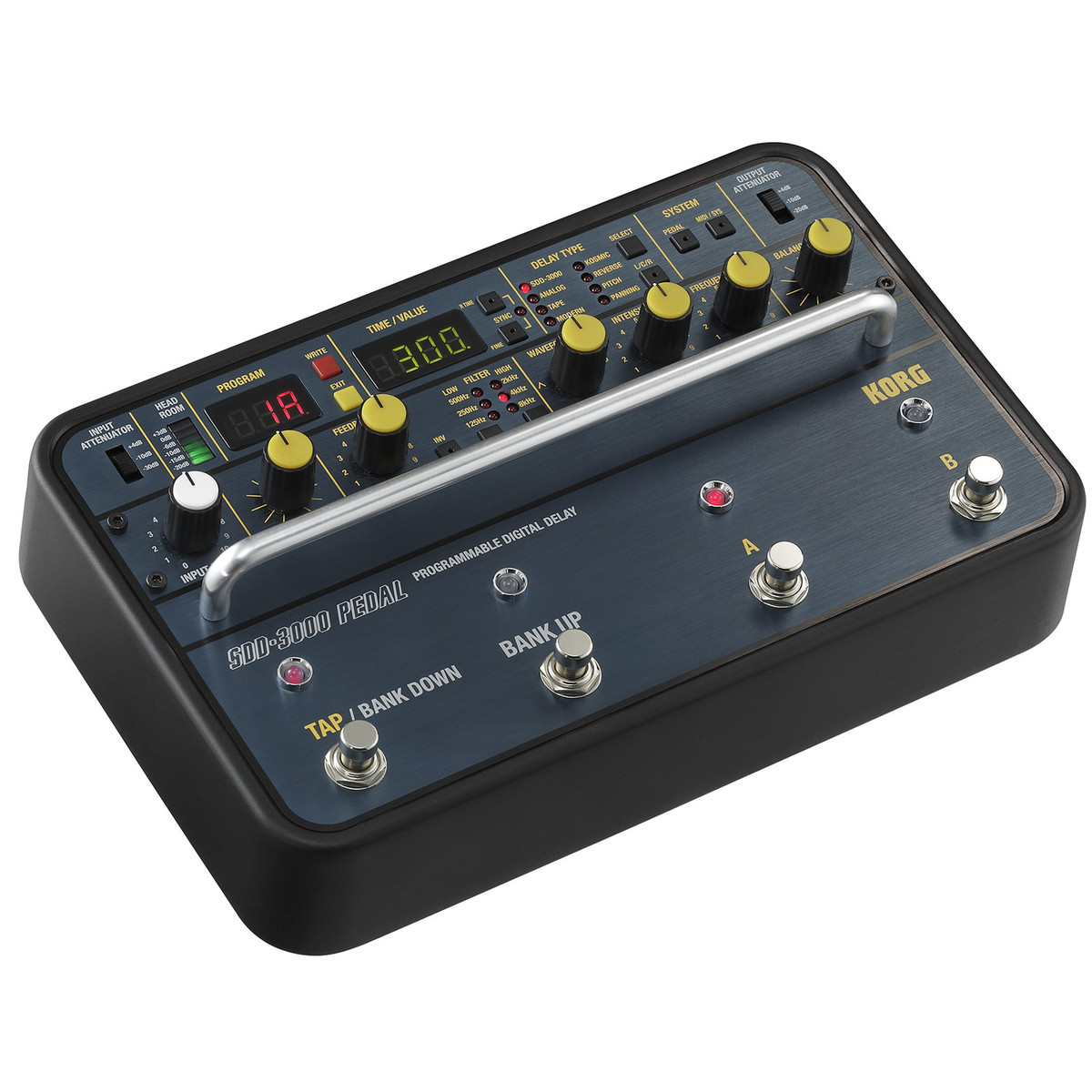 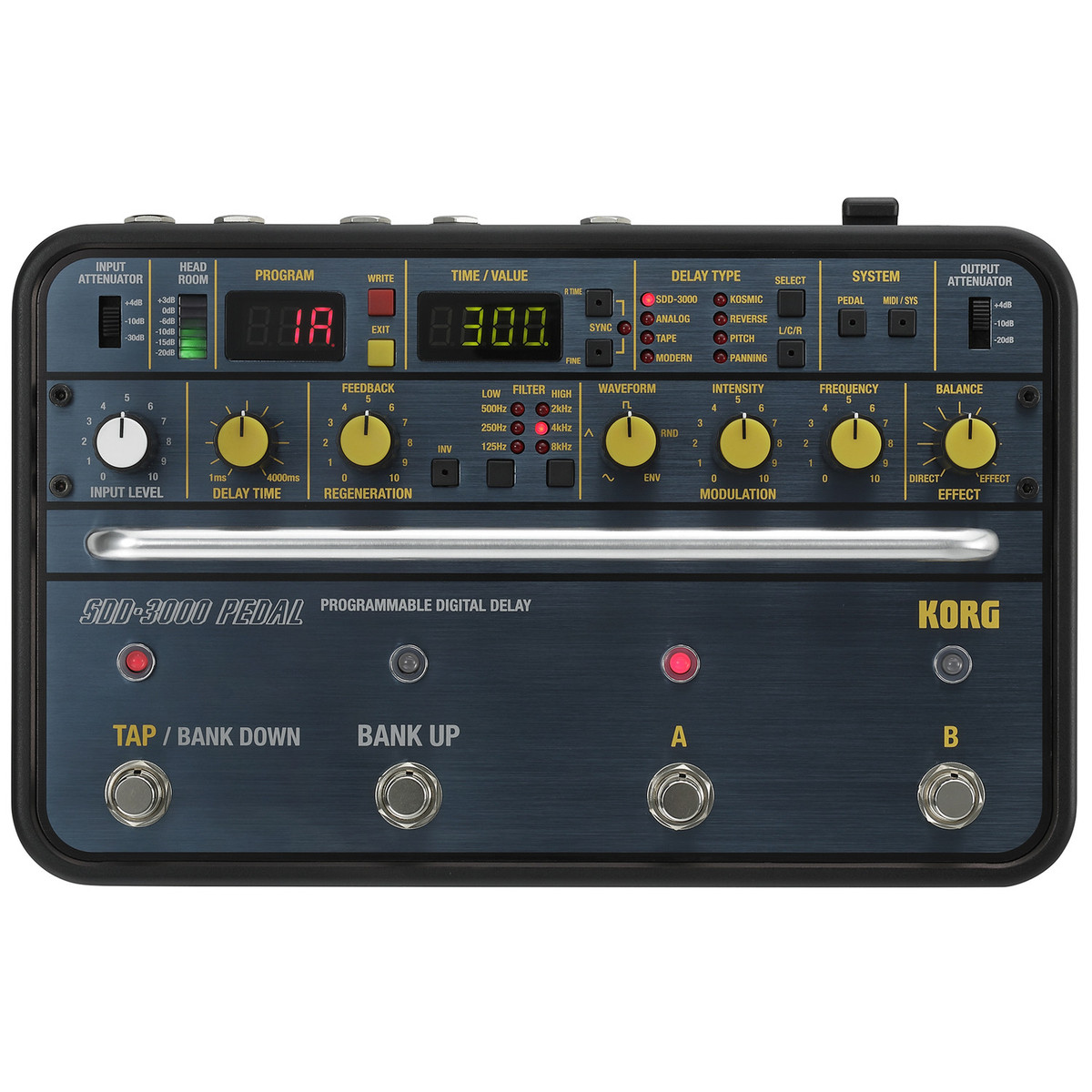 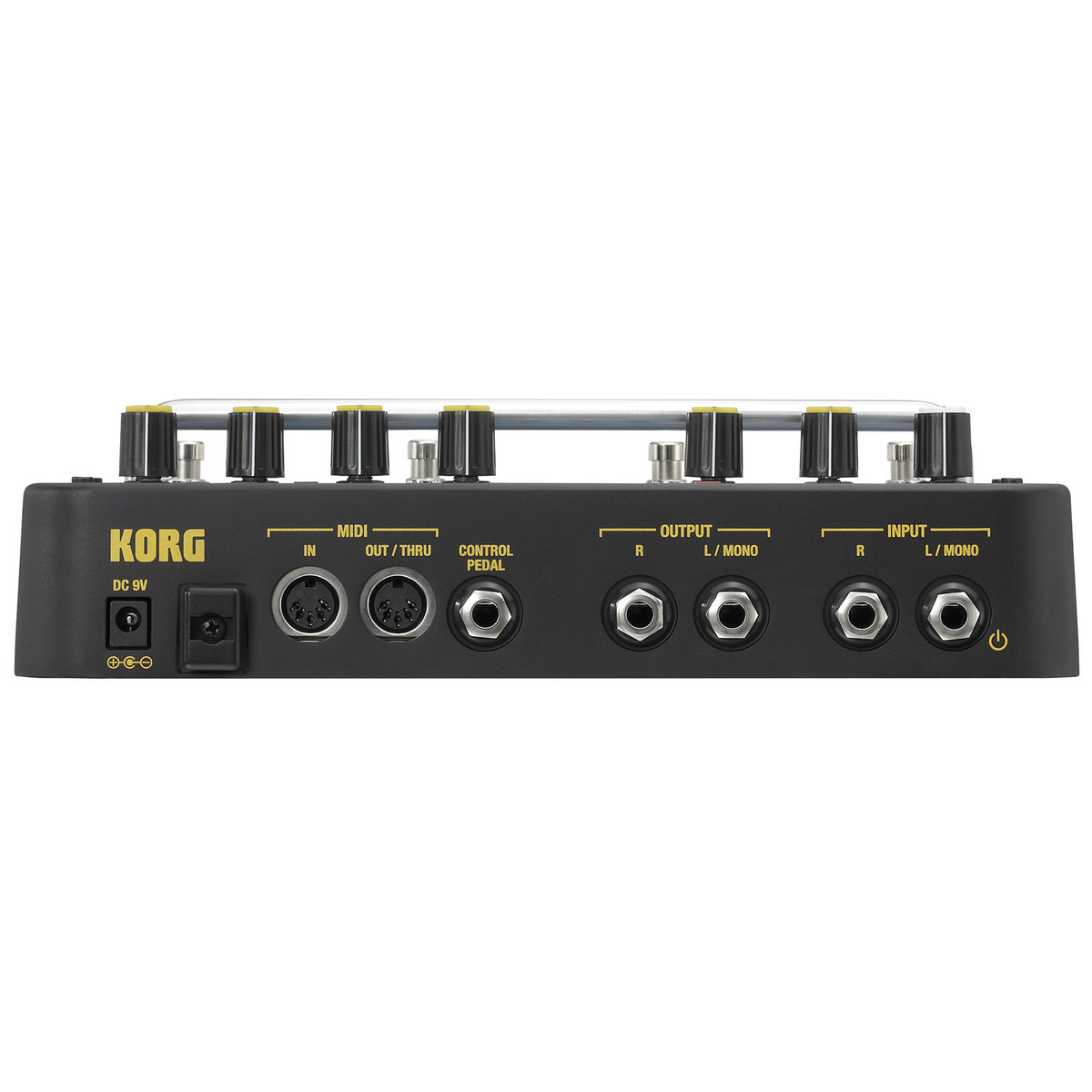 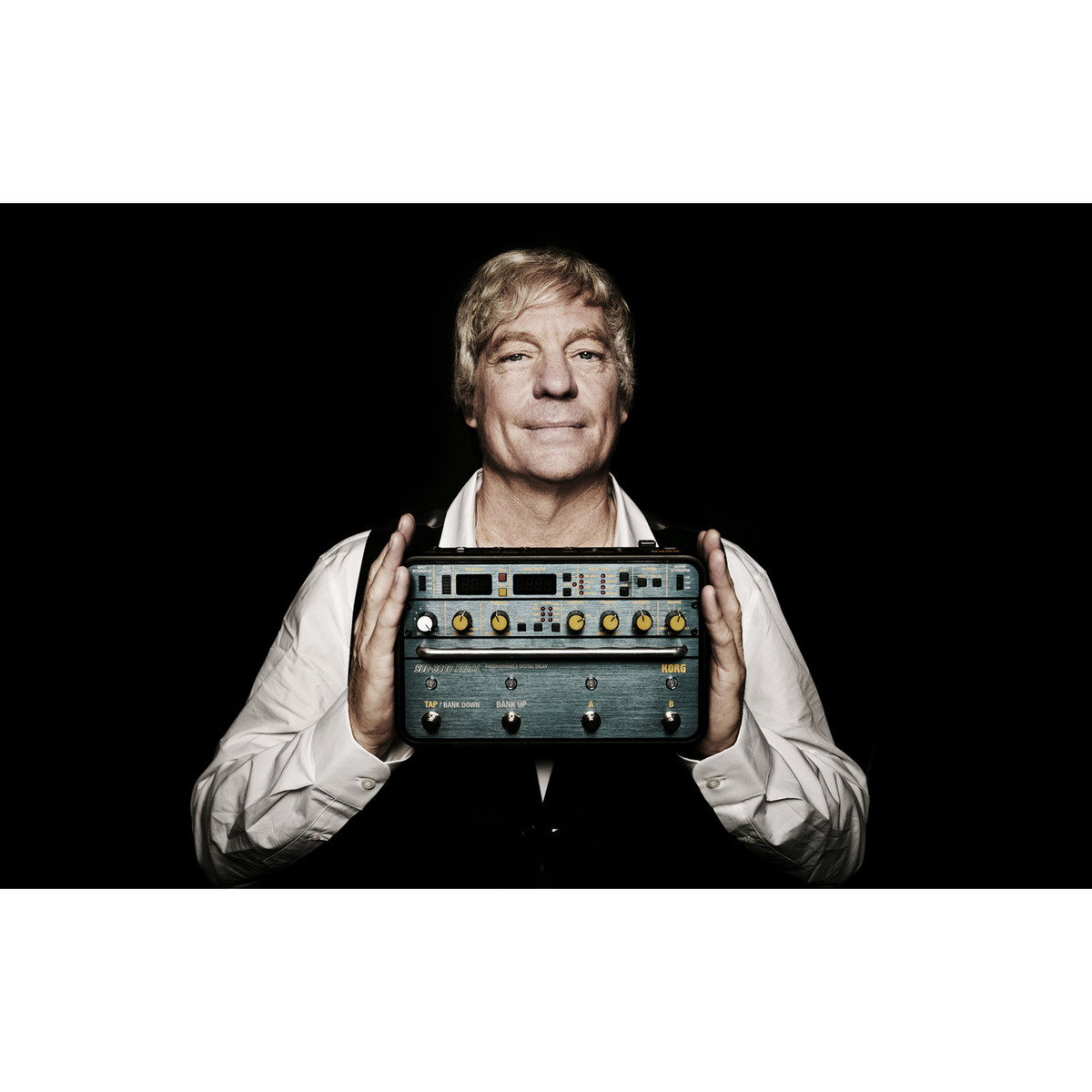 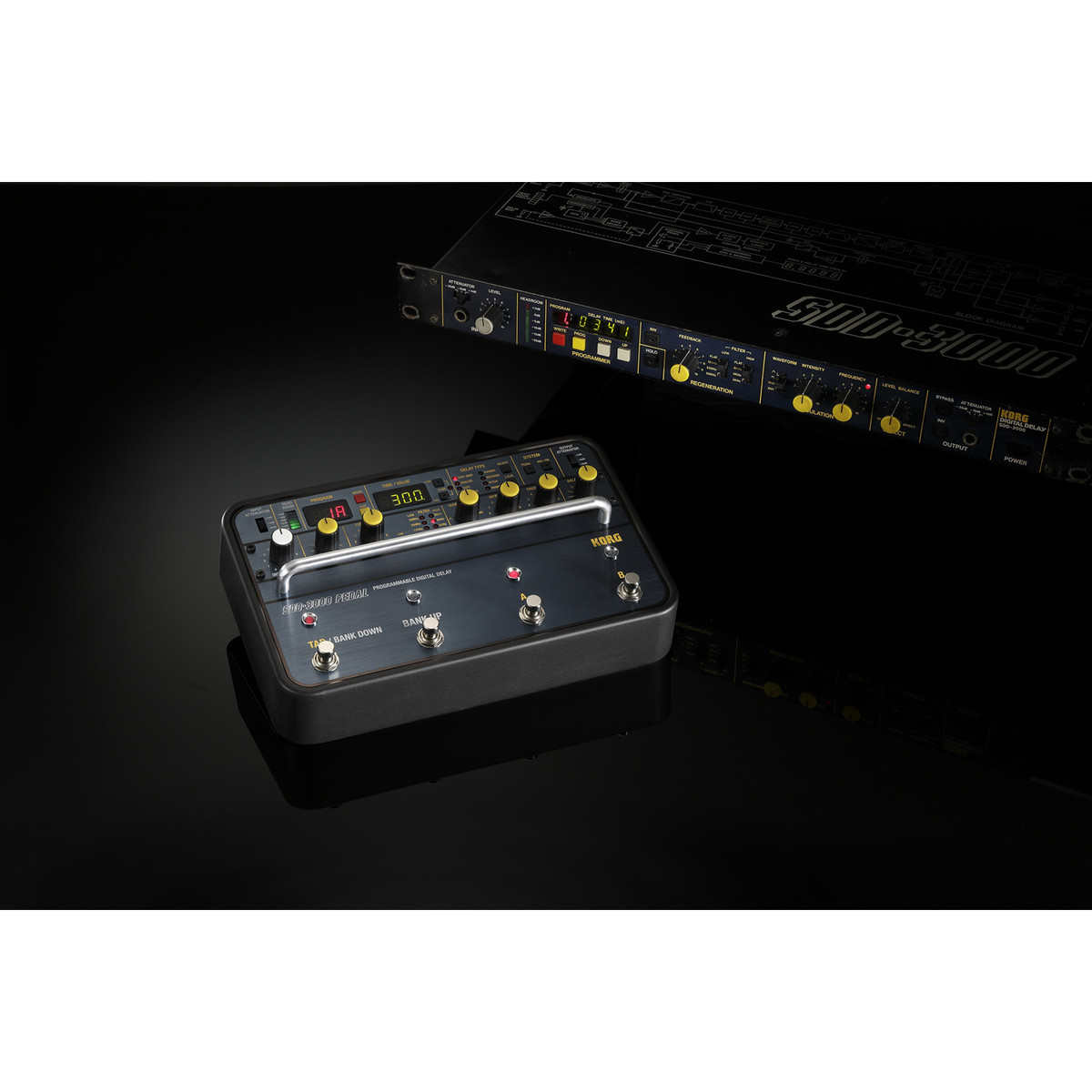 The Korg SDD-3000 is reborn! The rackmounted SDD-3000 of 1982 dominated the world as a classic digital delay. Now, it has been relaunched as a convenient pedal unit to bring its classic sounds to rock guitarists worldwide.

The Korg SDD-3000 features a head amp with ample headroom, a filter circuit that modifies the feedback sound, and modulation waveforms that allow a diverse array of delay effects. In addition to specifications that will satisfy SDD-3000 users, it provides many new functions such as eight delay types, long delay up to 4,000 milliseconds, selectable modulation waveforms, stereo input/output, and MIDI. The user interface has also been updated for dramatically improved ease of use.

Eight different delay types give you a wide range of variety

At the core of your sound-shaping, you can choose from a total of eight delay types. In addition to the original SDD-3000 delay, there's also analog delay modeling that provides the warmth of a BBD device, a TAPE model that reproduces a tape echo, the clean MODERN delay sound, the fantasy-like KOSMIC delay which adds pitch change to the reverb sound, REVERSE which plays the delay sound backward, a pitch shifter placed before the delay, and PANNING which controls the stereo position of the output. A wide range of delay effects can be produced with this single unit. In addition, there's a ducking function that lets you apply delay only when the input is at a low level.

A faithful replication of the original SDD-3000's preamp

Its preamp was one of the most important factors that raised the SDD-3000 to the status of a legendary effect unit. The thick, preamp sound that distinguished the SDD-3000 was a decisive aspect of its character. Many musicians even used the SDD-3000 in a bypassed state simply as a preamp in order to obtain this effect. It goes without saying that the SDD-3000 PEDAL faithfully replicates this preamp. Ample gain and headroom are maintained, and input/output attenuators are also provided. This lets you set the input/output levels optimally when using this unit, meaning that in addition to guitar, you can use it with a variety of instruments including analog synthesizers, keyboards, and vintage effects, and be confident that the SDD-3000 PEDAL's potential will be maximized for any audio source.

For the bypassed sound, you can choose either the direct sound that has been routed through the preamp circuit and adjusted by the gain setting to an appropriate level, or you can choose a true bypass sound where relay switches connect the signal lines directly without passing the signal through any electronic circuitry whatsoever, thus ensuring that the unit does not affect the sound in any way.

A filter circuit that modifies the feedback sound

A low-cut/high-cut filter can be applied to each delay repeat, allowing a range of effects from a natural softening to a harder emphasis. By using the inverter to reverse the phase of the delay sound, you can also obtain flanging effects.

Five types of modulation waveforms to modulate the delay time

One of the characteristics of the SDD-3000 was its modulation capability for modulating the delay time. This function dramatically expands the range of delay sounds, giving you even more expressive power. The SDD-3000 PEDAL gives you a choice of five new waveforms, allowing you to generate complex sounds such as chorus, vibrato, doubling, wow/flutter, and Doppler effects, giving this unit a variety of possibilities that go beyond the bounds of existing delay effect units.

In addition to using the tap function to set the delay time intuitively, you can use the Sync mode to specify the setting in terms of a note value. You can choose from 11 note values ranging from whole notes to 32nd notes, making it easy to set up those signature sounds of world-class rock bands known for their delay sounds, such as a rhythmic "dotted eighth note" delay.

A total of 80 different delay sounds that you've created on the SDD-3000 PEDAL can be saved as programs. It comes from the factory with 40 stage-ready programs already housed in the internal memory, ranging from standard delays to more unique types, as well as song presets that recreate the delay sounds used in famous songs.

Use an optional foot controller to enhance your performance

By using an optional foot controller, you can control the parameters with your foot. You'll be able to control multiple parameters simultaneously, so that even complex delay effects can be obtained easily.