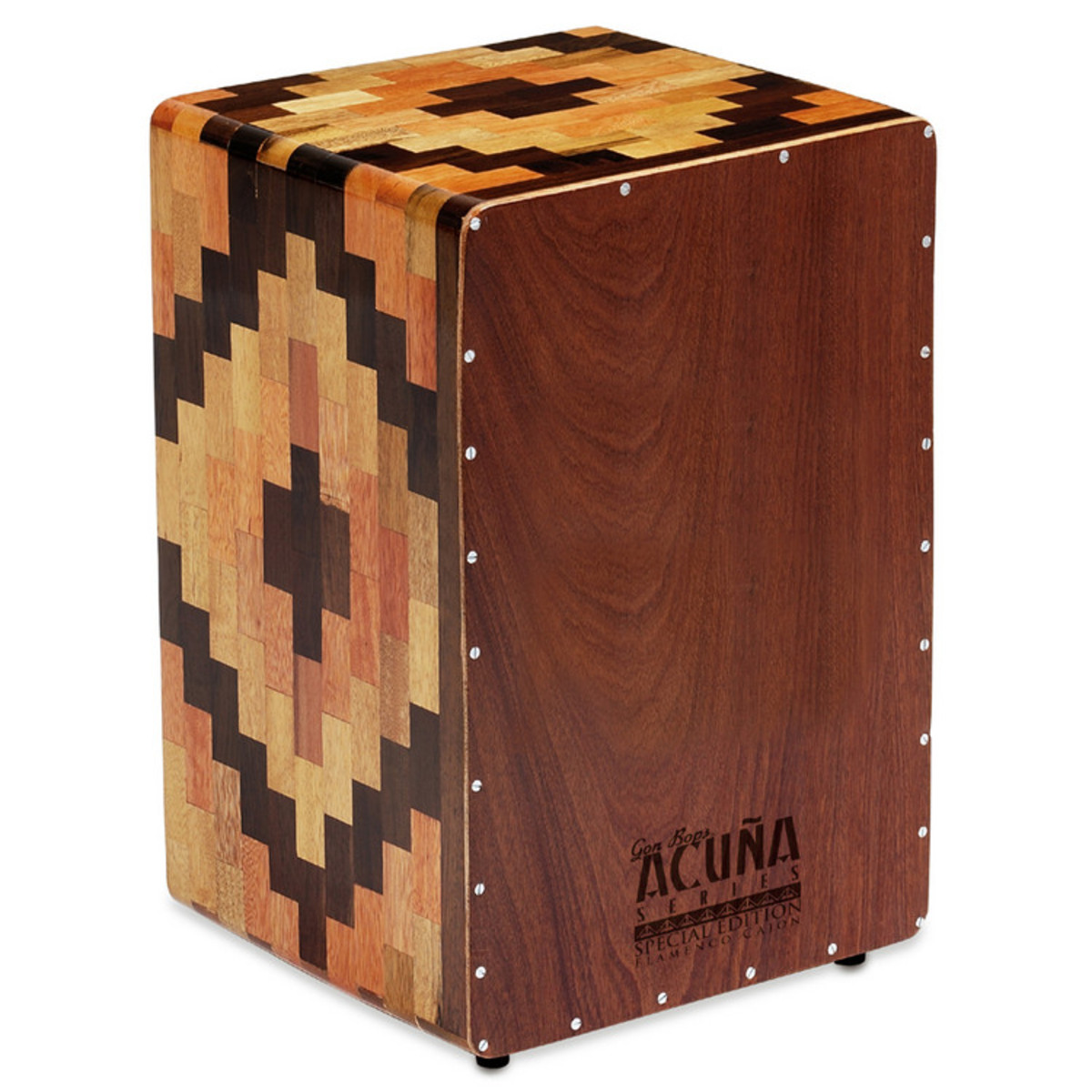 $381.00excluding VAT
1 in stockDelivery Information
Item in stock and available for dispatch

Truly a work of art! This beautifully and painstakingly hand-inlayed instrument is also one of the most versatile Cajons on the market. Its deep, resonant bass tone is awe-inspiring. Playing with hands closer to the edges results in multiple levels of "snap" as the minimalist guitar string wires are engaged, resulting in some truly sublime effects.

Wires are configured diagonally across the corners for reduced snare sound when playing bass tones. An increased number of adjustable screws also results in greater control over snap and resonance. The seamless finish features Peruvian hardwood dovetailed corners with smoothly rounded joints, and individual multi-coloured wood tiles are arranged into a spectacular wooden mosaic. Hand-crafted and meticulously tested in Peru by skilled craftsmen!

Born to a musical family in Lima, Peru, Alex Acuna started playing in local bands at 10, and by 18 was playing in the great Perez Prado's band. In 1967 he moved to Puerto Rico, where he studied at the Puerto Rico Conservatory of Music, and played under the direction of the famed Spanish cellist master Pablo Casals. Alex moved to Las Vegas in 1974, where he played with such greats as Elvis Presley and Diana Ross. Between 1975 and 1977, he cemented his place in jazz history when he became both drummer and percussionist for one of the most innovative and pioneering jazz groups of all time, Weather Report. Alex moved to L.A. in 1978 where he quickly earned the position of a valued session drummer and percussionist for recordings, television and motion pictures. His countless album and live credits include such diverse artist as U2, Paul McCartney, Joni Mitchell, Ella Fitzgerald, Chick Corea, Placido Domingo, Tito Puente, Santana and many, many more.

Founded in 1954 in California, Gon Bops is one of the oldest and most respected manufacturers of Latin instruments in the world. The company has pioneered several features and improvements that have forever changed Latin instruments, including pre-monuted replacement heads for congas and chromatic tuned cowbells. Famous artists who use Gon Bops include Daniel Adair of Nickelback and Chad Smith of Red Hot Chili Peppers.