Almost unchanged for nearly fifty years, the Roland Jazz Chorus Amp has reached legendary status. It sits in the pantheon of classic guitar amps that are loved and adored by musicians all over the world.

Producing luscious, rich sounds and immaculate clean tones, the JC-120 has appeared on countless records and rig rundowns throughout the decades.

Indeed, it’s such a reliable workhorse that any self-respecting studio or backline rental company will always have one or two in their collection. It’s this reliability and consistency which has made it so revered, creating an enduring popularity that has stood the test of time.

And now it’s got a brand-new look! As part of their 50-year anniversary celebrations, Roland have announced an extremely limited run of a unique JC-120.

Guitarists, collectors, and appreciators of timeless cool, feast your eyes on this… 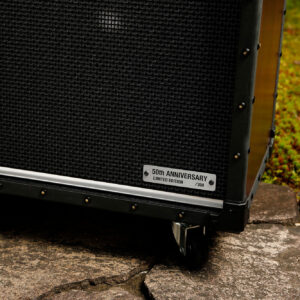 Housed in a gorgeous cherry wood cabinet that’s flanked by the trademark JC studs, this special edition Jazz Chorus is a visual treat.

Inspired by traditional Japanese travelling trunks, this premium design is what Roland envisaged all the way back in 1975 – but it was too expensive to put into mass production.

Fast forward to 2022 and their original dream can be realised, with no expense spared!

That alluring cherry wood is complemented with a textured dark grey netting and a hand-engraved number badge, so you know exactly which one of the 350 available units is yours.

It’s a chance to own a distinctive, incredibly rare version of one of music’s all-time classic amps.

But if you’re unsure why this is something to be excited about, read on to find out why the JC-120 is such an icon…

What’s so special about it in the first place?

If you’re not familiar with the JC-120, you might be wondering what the fuss is about. After all, the dominance of valve amps in the guitar world left little room for the solid-state models to shine. But while you might not have played the JC-120 (which you should!), you have almost certainly heard it!

Gracing the sounds of U2, Muse, Talking Heads, Culture Club, Johnny Marr, The Police, and even Metallica, to name a few, there’s a hit song in your playlist that has featured a Jazz Chorus amp in some capacity.

So, what makes it such a favourite? Well, it’s known as the king of cleans for good reason! It boasts a tone that is both immaculate and immersive thanks to its solid-state circuitry and stereo chorus effect. The latter is an effect that’s as revolutionary today as it was back in 1975, courtesy of the enveloping wave of audio that its twin speakers and unique chorus settings achieve.

Not only is it engaging and mesmerising in its sound, but it’s also incredibly consistent and reliable. The hyper-clean tone is smooth and easily controllable thanks to twin power amps and custom speakers, with none of the sharp peaks or troughs that you might experience with other amps.

The history of the Jazz Chorus

It’s worth mentioning the story of this venerable amp. With a heritage stretching back to 1975, Roland have created the longest in-production amp ever.

As the name suggests, the original target audience for the JC was jazz musicians. In particular, it was aimed at the popular jazz fusion genre that demanded super clear voicings to pair with adventurous effects. This need for stability and articulation inspired the JC-120’s unique feature: solid-state circuitry.

It allowed players to maintain an even tone that wasn’t susceptible to changes in temperature, granting even the jazziest maestros a dependable performance.

As the crunch of punk and rock of the ‘70s gave way to the synth-fuelled new wave and post-punk of the ‘80s, the JC-120 expanded from its jazz roots. It found prominence amongst bands like The Smiths and Tears for Fears, acts who revelled in the JC’s sparkling clean sound and potential for effects.

“They like the sound. I’ve had quite a few people geeking out over the JC-120.” – Johnny Marr, The Smiths

Ever since this explosion of popularity, the JC-120 has remained a mainstay for clean sounds and recording consistency. But as we’ve seen from its transformation from jazz acts to pop groups, the base sound of the Jazz Chorus is extraordinarily flexible, which leads us onto…

How can I use it today?

It’s got plenty of history behind it, but what can a modern player expect from such a super-clean, matured amp? Well, for one thing, its engaging chorus effect is just as satisfying today as it was back in the ‘70s.

And despite how we’ve droned on about its clean tones, it does come equipped with a distortion setting, one that has a fair amount of teeth at full whack – certainly enough to keep up with contemporary styles. Where this distortion – and the rest of the JC-120, for that matter – truly shines is as a base for additional effects.

The wide sonic spectrum and finessed EQ create the perfect platform for pedals and modellers, while the built-in distortion adds thickness and harmonics to overdrive effects. And as we’ve mentioned before, the consistent and smooth voicing of the 120 means you’re less prone to irregularities in your frequency, a fact that some tone shapers love.

It’s pretty expensive – are there any alternatives? 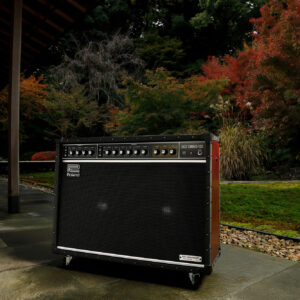 That’s the elephant in the room. The JC-120 is impressive, sure, but it might not be within the budget (or space) available to many players seeking legendary sound. Luckily, Roland have us covered with smaller (and less pricey!) Jazz Chorus amps, in addition to some clever pedals made by their sister company, Boss.

The JC-40 and JC-22 are both scaled-down versions of the 120, aiming to be more portable (or personable) than their bigger brother. Crucially, they’ve managed to cut down the size without sacrificing the tone or experience.

Unlike the JC-120, the JC-40 and JC-22 are true stereo amps, allowing you to easily hook up stereo effects in front of the amp for super-wide tones. Plus, their size and output make them perfect for studio use and smaller gigs.

What if you just want that sweet, sonorous chorus effect for your own setup? Well, the Boss CE-2W pedal is exactly what you need!

The custom mode is a recreation of the Boss CE-1 that came out in ’76, essentially the JC-120’s chorus circuit in a primitive stompbox form. It’s got stereo output too, so you can hook it up to two amps for maximum impact and bask in that deep swirling chorus! 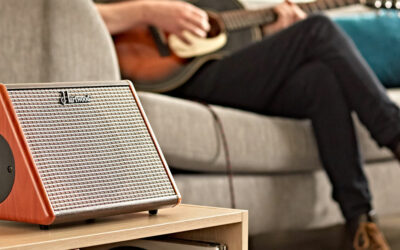 Perhaps it’s time to consider an amp upgrade! Even if you’re looking for your very first acoustic amp, getting the right one is crucial. After all, it’s a critical component of your sound! So, the better your boombox is, the more of your natural acoustic character will shine through to an audience. 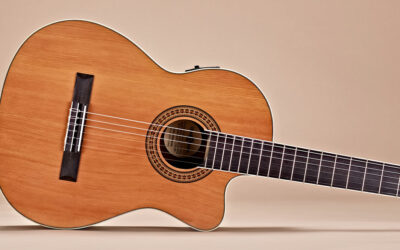 Which Classical Guitar is Best for Beginners?

Just to give you a quick run down – classical guitars are very much like acoustics, but they have nylon strings instead of metal or metal alloy strings, as well as a particular body shape. This makes them much easier to play and gives them a distinctive, bright tone. They’re used for a range of genres, from classical (duh) to flamenco and even jazz! Often, they’re called Spanish guitars – which are exactly the same. 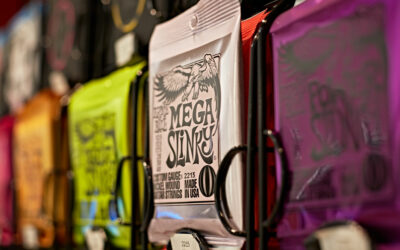 Strings and Things – Your Guide to Ernie Ball

The king of the string. Or strings, rather, because Ernie Ball boast a wide selection of electric guitar strings to satisfy every musician’s needs. From the Super-Slinky nickel wounds to the hi-tech Slinky Paradigms, you’ve got different materials, construction methods, and gauge thicknesses to elicit all kinds of sounds and playing styles from your mighty axe.