The Latest Generation of Yamaha Arius Pianos Has Been Announced!

by Tom Miller-Swain /
01/02/2022
New Releases, Pianos & Keyboard
Announced today, the latest incarnation of Yamaha Arius pianos builds upon the success of their predecessors. But what’s new?…

The samples found on the new Arius models are more meticulously sampled from the flagship Yamaha CFX Concert Grand piano; a highly acclaimed piano, often found in top concert venues around the world. Carefully recorded, you can get the rich expression, that would normally only be reserved for the top concert pianists, in your own home.

Due to the delicate samples taken, you can get even more definition right from the bass of the piano to the top of the treble to really complement the expression of your playing.

Sound balance has also been carefully considered with this latest Arius series. The new onboard technology corrects the sound balance according to the volume, ensuring a more natural sound is generated that’s gentle on your ears. This is also teamed up with their Stereophonic Optimizer – a truly amazing piece of technology. 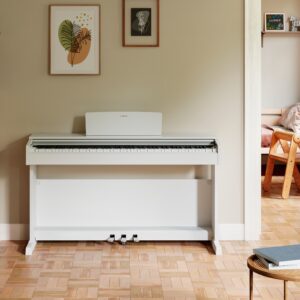 The samples are normally recorded next to the strings in the piano, so when you wear headphones, it is almost like your head is inside the piano. To rectify this, special microphones are positioned in place of the player to more accurately recreate the experience of playing.

Along with the built-in 50 famous classical songs, you can now improve your playing with 303 comprehensive practice exercises from prestigious piano composers of the past, including Beyer, Burgmüller, Czerny, and Hanon. In addition, you can also use the free Smart Pianist app to give you a more intuitive way of changing a whole host of settings and viewing scores of built-in songs. 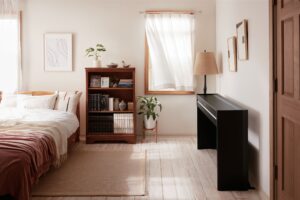 The main difference between the S models compared to the 145/165 is their more compact design.

The slimmer S models are particularly beneficial if space is of a premium in your home.

The sleek design effortlessly enhances your living space with a variety of colours available to complement your decor. The lid on the S models lifts, rather than slides. So, when it is closed, the flat surface sits more discretely in your home. 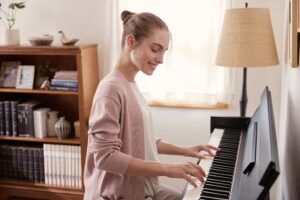 Keyboard action is very important for the aspiring piano player. The YDP 165/S55 features the GH3 (or Graded Hammer 3) action rather than the GHS (Graded Hammer Standard) action on the YDP 145/S35.

Put simply, that means that the GHS key action has weighted keys so the lower notes are heavier than the higher notes, as is typical on an acoustic piano.

The GH3 action takes that a step further and allows you to feel the weight of the key when it is pressed a second time, before completely releasing the key,meaning the repetition rate is much greater so more demanding classical pieces can be played with ease.

The higher specification models, the YDP 165 and S55, also feature a higher data capacity as well as more powerful amplification. The YDP 145 and S35 host 2 8W amplifiers, whereas the YDP 165/S55 boasts 2 20W amplifiers to give your playing that extra boost.

Regardless of which of the Yamaha Arius pianos you choose, the high level of attention-to-detail in all aspects of the piano will get you off to a great start in your piano playing journey. Why not explore our full range below?