by Corin Allen /
20/01/2022
Guitars & Bass, Learn
Ernie Ball have been stringing us along for decades. But in a good way. They’re undoubtedly one of the most popular choices for guitarists and bassists around the world thanks to two aspects: build quality and sheer choice.

There are now dozens of different gauge types to choose from, be it the world-renowned Regular Slinkys, super-strong Paradigms, or hybrid-style Skinny Top Heavy Bottoms. If you’re a guitarist or bassist, you’ve heard of Ernie Ball. 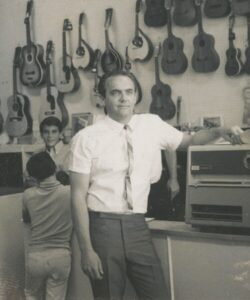 However, this now well-established, global brand had relatively humble beginnings. Ernie Ball was a thrill-seeker, who was into surfing and flying small aircraft. So, it’s fair to say he was willing to take plenty of risks – both with his body and his business.

In fact, he famously went bankrupt three times when he tried to open a guitar store in Los Angeles.

To get an idea of why this happened, you need only look at the general music scene of the day.

In the 1950s, Big Bands were all the rage – guitars were miles away from centre stage. Hard to imagine in the 21st century (but no one could have foreseen the guitar explosion that was to come). However, Ball, undeterred, set up his guitar-only shop in 1962 – he was destined for greatness.

The road to success 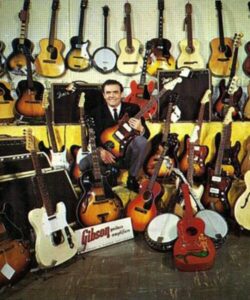 It is often said that success is a combination of skill and ambition, and being in the right place at the right time. Ernie Ball would likely attest to this were he still alive.

Rock ‘n’ roll was becoming a global phenomenon when he was following his entrepreneurial pursuits. The likes of Chuck Berry, Elvis Presley, and Jimi Hendrix were forging ahead and setting the stage for many bands to come. As such, this guitar-driven music was inspiring the younger generations of the day to pick up the guitar.

However, Ball’s success didn’t come just through selling guitars. One of the key elements of this new style of guitar playing was something that would come to be a staple of electric guitar forevermore: string bending.

Whilst the established pros had mastered this technique through years of playing, youngsters would struggle to imitate, largely due to the thick string gauges of the day. This is where Ernie Ball saw his opportunity.

He invented the now-famous Ernie Ball Slinky strings, which were much thinner and more playable, proving to be a much better fit for the rock ‘n’ roll genre as a whole. As any experienced guitarist knows, these strings were a roaring success, and continue to be so today. It’s no surprise that other string manufacturers cottoned on, and started making their own strings in these gauges.

The Ernie Ball story doesn’t stop there, though. Ball’s innovative flair led him to create the Ernie Ball volume pedal, which set a new standard of control and quality craftsmanship.

But the real momentum came when Ernie Ball merged with Music Man in the early ’80s – a company that makes premium guitars and basses to this day, and for a myriad of famed musicians too. This carved out his place amongst the greats of guitar innovation, such as Leo Fender, Paul Reed Smith, and Orville Gibson.

Fast-forward to today, and Ernie Ball is still known for his strings. Well, why not? They helped to shape a genre, and now there is a multitude of gauge combinations to cater to the needs of all musicians. His innovation in this field has helped guitarists and bassists be more expressive and less restricted on their instruments, and massively expanded the universe of strings.

Ernie Ball strings are a mainstay for guitarists and bassists around the world. Take a look at what they have to offer: 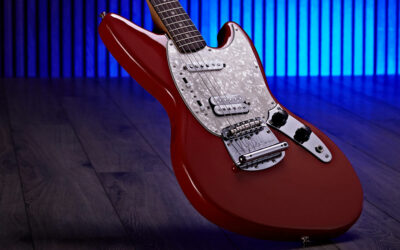 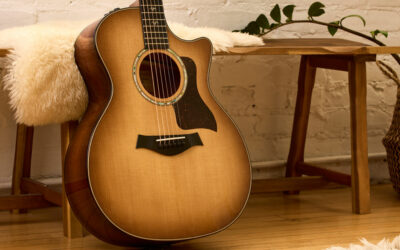 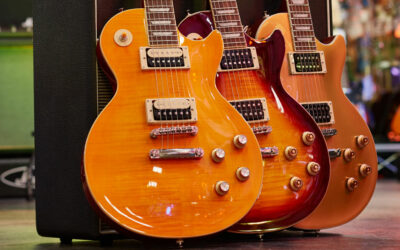