Five Guitar Hacks That You Need to Know

by Cory Young /
25/05/2022
Guides, Guitars & Bass
Getting the most out of your guitar doesn’t always mean improving your performance skills or music theory knowledge. Sometimes, a simple hack can unlock your hidden unique style or sound as well as let you complete a job faster than ever before.

We’ve compiled our five favourite guitar hacks that let you level up your creativity and carve a niche for yourself as an artist.

So, let’s get started…

The burden of playing the guitar: maintaining tuning.

A necessary evil that can spoil any performance if not done correctly, this hack will let you tune up quickly and much more accurately than you ever have done. The trick is to make use of your tone control and neck pickup.

Tuning to natural harmonics across the octave of your guitar can produce some instabilities in your tuning pedal that are caused by upper harmonics.

Instead, try switching to your neck pickup and then roll your tone control all the way down.

Electronic tuners work by listening to the fundamental of your pitch. Each note you play, either as an open note or harmonic, has several harmonics stacked on top that can cause an inaccurate reading on your tuner.

Rolling your tone control all the way down and switching to your neck pickup will essentially turn down the volume or amplitude of those harmonics, making it much easier for your tuner to ‘hear’ the fundamental of your note.

Many different guitar tuners will become instantly more accurate when using this technique. 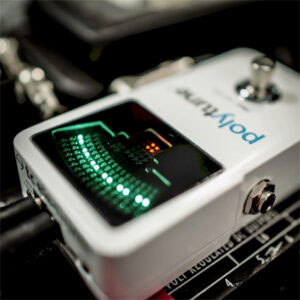 For those on a budget, we’d recommend the SubZero Tundra Tuner Micro Guitar Pedal for its compact size and bright display, and the Peterson StroboStomp HD Compact Strobe Pedal Tuner for professionals looking for the real deal.

A fantastic middle ground would be the TC Electronic PolyTune 3 Tuner Pedal. It’s used by many industry veterans and even has the ability to strum all strings simultaneously to tell you which string is out of tune.

Perfect in a pinch, this hack will be a game-changer for live performers who are subject to humid venues that can stretch your strings and warp your guitar in-between songs. Anyone familiar with a Les Paul ‘G’-string will know the importance of tuning your guitar as frequently as possible with utmost accuracy, making this hack a practical solution for you!

The ability to bend your strings is what separates your guitar from just about any other instrument. Adding vibrato to solos or chords gives your playing a sense of motion and fluidity that simply can’t be produced by other instruments such as a piano.

This vibrato technique offers a different sound to traditional vibrato, with a more natural pitch variation that’s reminiscent of playing back worn-out VHS tapes or vinyl ‘wow’ and ‘flutter’. To achieve this technique, the maximum effect will be had when using a bolt-on construction type instead of a neck-through or set-neck as the separation of body and neck is what creates the pitch deviation. 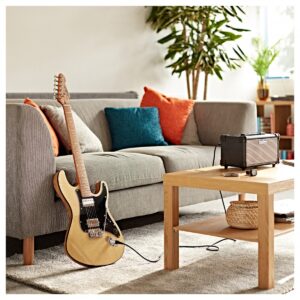 To get started, you’ll want to rest your picking arm against the body of your guitar, laying most of your forearm across the front of the body. The technique is done by pressing your arm into the body of the guitar with a relative amount of force, whilst bowing the neck with your fretting hand. This creates a displacement of the body and neck, changing the spacing between them and, therefore, altering the string distance from the neck and body, resulting in the pitch change.

It’s worth noting that this effect can also be done on the upper horn of guitar shapes such as Les Pauls, Stratocasters, and Telecasters, rather than just the main part of the body.

This technique might take some getting used to as you will need to use a fair amount of force to move the body and neck whilst also being cautious not to use too much.

Try experimenting with this technique over arpeggiated chords on accented notes to create a natural pitch bend that moves with the tempo of your playing. Ideal for lo-fi-style playing, you can expand your creativity and create melodies that don’t sound like anyone else!

Turn your guitar into another instrument

The perfect hack for thinking outside the box. You don’t even need any specialised equipment or expensive add-ons to do this; it can be done with something that you probably already have as a guitarist, a slide! 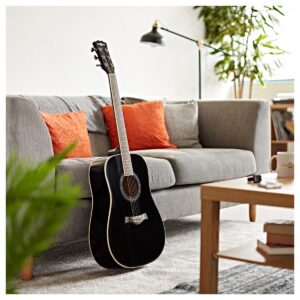 Using a slide, it’s easy to transform your acoustic guitar into a Japanese Koto, a plucked instrument which traditionally uses 13 strings with a bridge on each string that, when moved up or down the neck, alters the pitch.

For this to work effectively, a metal slide is preferred to glass as it will create a more authentic timbre. You can’t go wrong with the Guitar Steel Slide by Gear4music.

The Koto is a wonderful instrument that creates hauntingly beautiful sound and uses the same fundamentals that a guitar player has in their repertoire.

Plucked with the right hand and fretted with the left, techniques such as bends and slides are still possible when playing your acoustic guitar this way. In an open tuning, you can expand your music horizons and broaden your musical vocabulary substantially.

When writing or recording your own music, this hack shows its potential. You may be stuck on what sound to use for a certain passage or need inspiration for a musical idea that’s outside of traditional western sounds. With this skill in your trick bag, you can get out of creative ruts and show a different side to your composition ability without ever needing to purchase a different instrument. 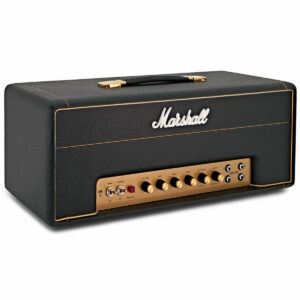 Four-input Marshall amplifiers are iconic beasts. Seen and heard on probably every rock album since the late 1960s, their signature snarling tone is the perfect match for humbucker guitars and hard rock guitar riffs. But there is a secret to these amplifiers that might not be apparent at first.

You can jump both Channel 1 and Channel 2, simultaneously creating a ‘bridge’ between them to round out your tone for more fullness and body.

More often than not, when faced with a four-hole input Marshall amplifier like the Marshall 1987X Plexi Reissue Valve Head, you’d typically reach for the top left input. Crank the volume, adjust EQ to taste, and rock away, right? Well, sometimes this can be a bit too much for a mix as the trademark ‘ice-pick’ attack of the bright channel can cut through all too easily.

The top row of inputs on a four-input Marshall is the high-sensitivity inputs, offering the most input gain from your guitar signal to the front-end of the amplifier.

On the second row, you’ll find low-sensitivity inputs that taper the input gain virtually by half, lessening the effect of the bright-cap that is prevalent on ‘Plexi’-style Marshalls. The reduced input gain and impedance often roll off the tone, creating a smoother, cleaner, and more rounded sound.

Plugging your guitar into the top left input and then using a patch-cable to plug between Channel 1 and 2 creates a series guitar signal, letting you blend both volumes simultaneously! 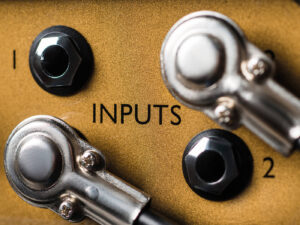 This is perfect for more mellow styles of guitar that need a bit more roundness to their sound.

A sure-fire wire to quickly and easily add fullness without needing to adjust the bass dial, bridging the two channels is ideal for a few different Marshall amplifiers.

The effect of this bridging between the channels is much more prominent on cleaner sounds at a lower volume. With this in mind, bridging channels on the Marshall 2245 JTM45 Reissue Valve Head is perfect as this amp features higher headroom for more clean-style playing. It’s ideal for getting that warm and thick Frusciante “Californication”-era tone.

This also applies to the Marshall SV20H Studio Vintage Valve Head as the 20w output means that, at lower rehearsal and bedroom levels, adding the body of Channel 2 will give your sound the push and energy that a very loud, cranked 100w amplifier can without sacrificing your hearing.

Creative powerhouses Paul Gilbert, Steve Stevens, and Eddie Van Halen all share one thing in common (other than their inhuman levels of musical ability). They’ve all used a variety of different tools to create a signature sound that’s completely outside of the norm!

From Makita cordless drills to toy ray guns, some of the most iconic sounds in rock history have been created using strange and unusual items.

Heard on Billy Idol’s iconic “Rebel Yell”, guitarist Steve Stevens used a toy ray gun which he customised with an adjustable speed dial to create the signature sound in the guitar solo.

Placing the speaker of the ray gun against the guitar pickups means that the sound of the toy will be heard by your guitar and played through your rig. Of course in this song, the rig is a blazing stack of overdriven amplifiers, creating a crunching and pulsing sonar-like sound that rings out heavily.

Similarly, Eddie Van Halen used a Makita power drill held up against his guitar pickups to amplify the sound of the spinning motor during the intro to 1991’s “Poundcake”.

Not the only player to use a power tool, Paul Gilbert also took a drill to his guitar in Mr Big’s “Daddy, Brother, Lover, Little Boy”. This time, using the drill in a more musical way, Paul Gilbert attached four plectrums to the end of his drill, allowing him to play his drill in time with the music during his legendary guitar solo.

In all instances, these songs became smash hits! This goes to show that thinking outside of the box and experimenting with non-musical items can create everlasting memories that will stay with your listeners, leading them to wonder “how was that sound made?”.

Next time you’re stuck for inspiration, maybe break out the toolkit and see what works for you.

Now that you’re armed with the knowledge of the dark arts of guitar hacks, why not experiment with your instrument and take your creativity to the next level?