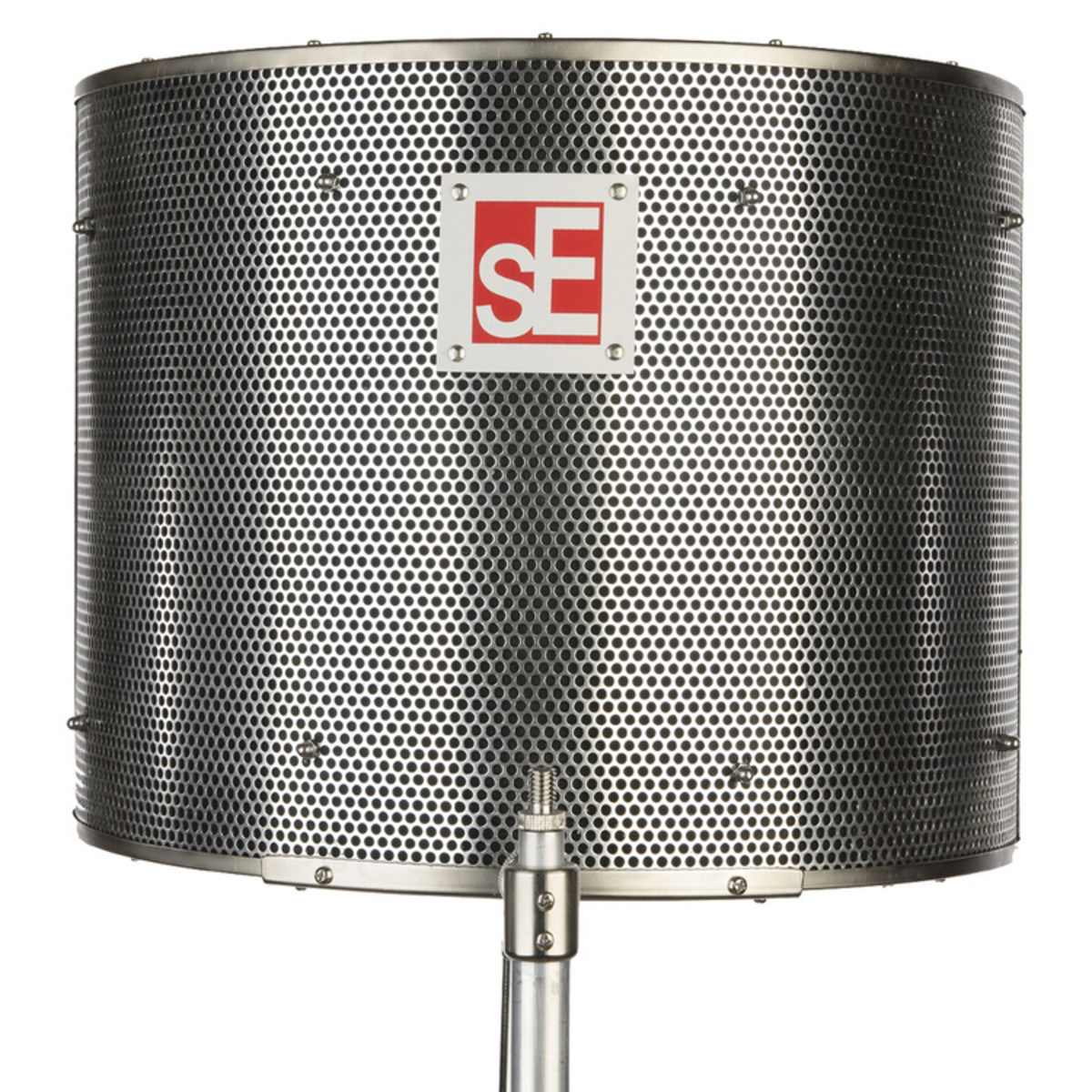 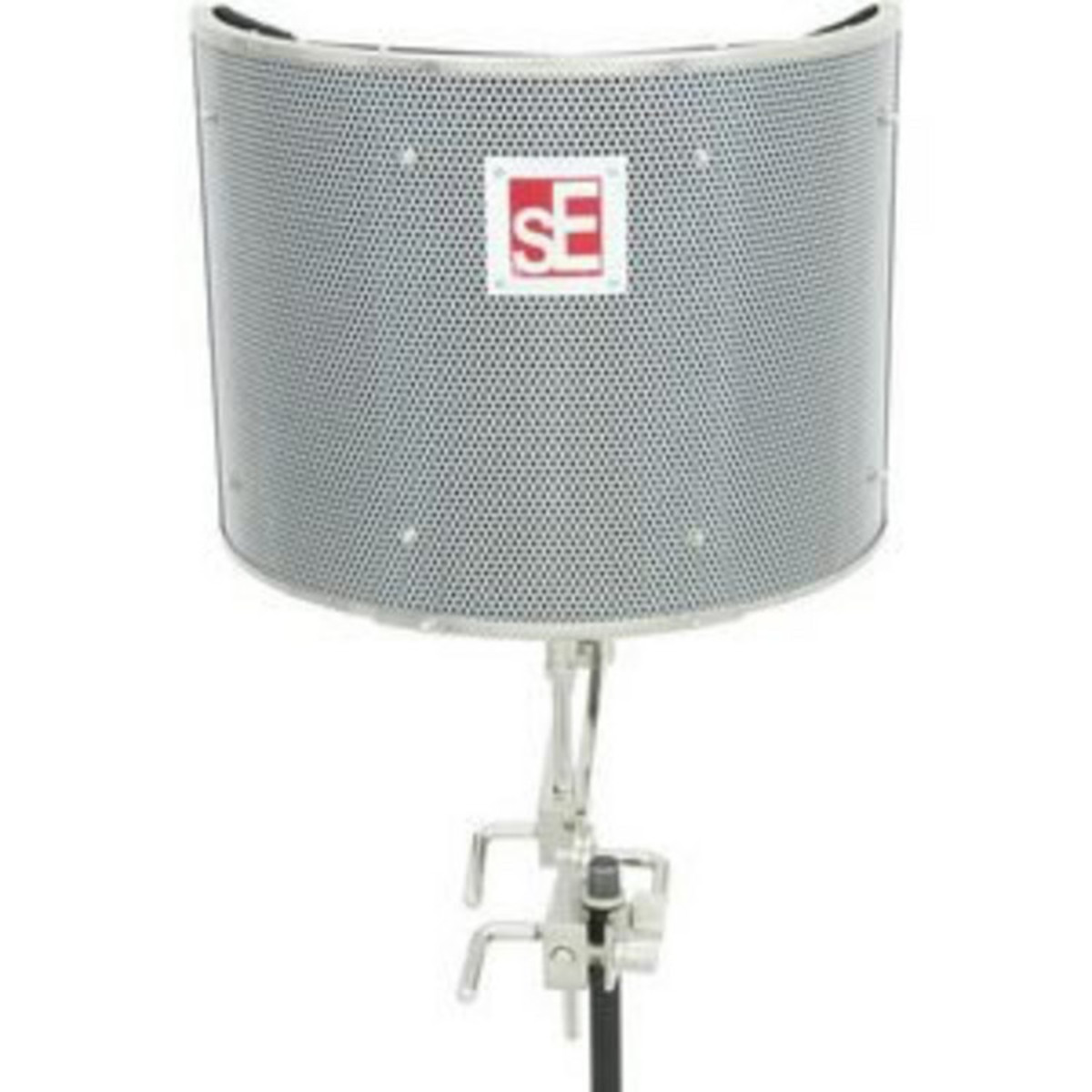 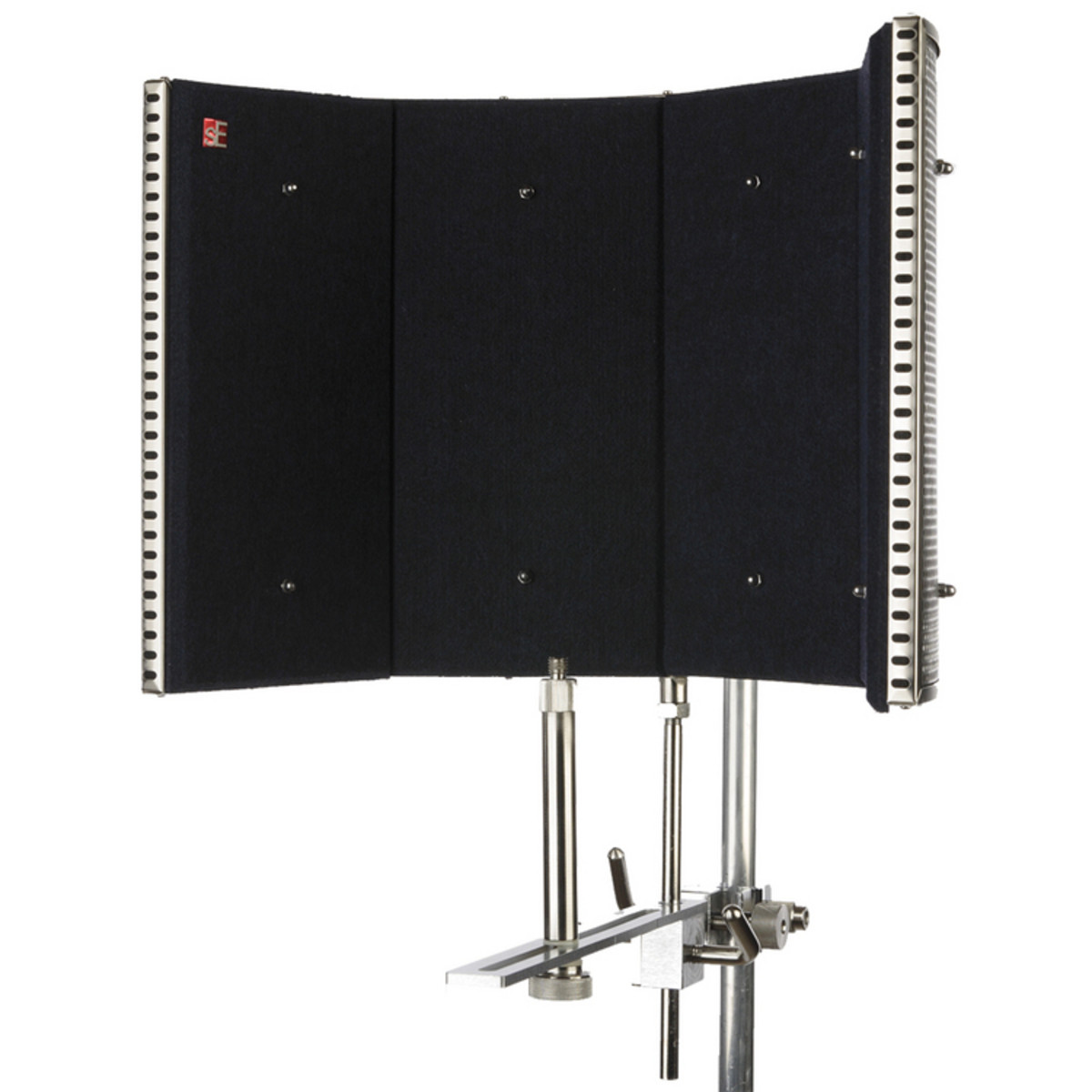 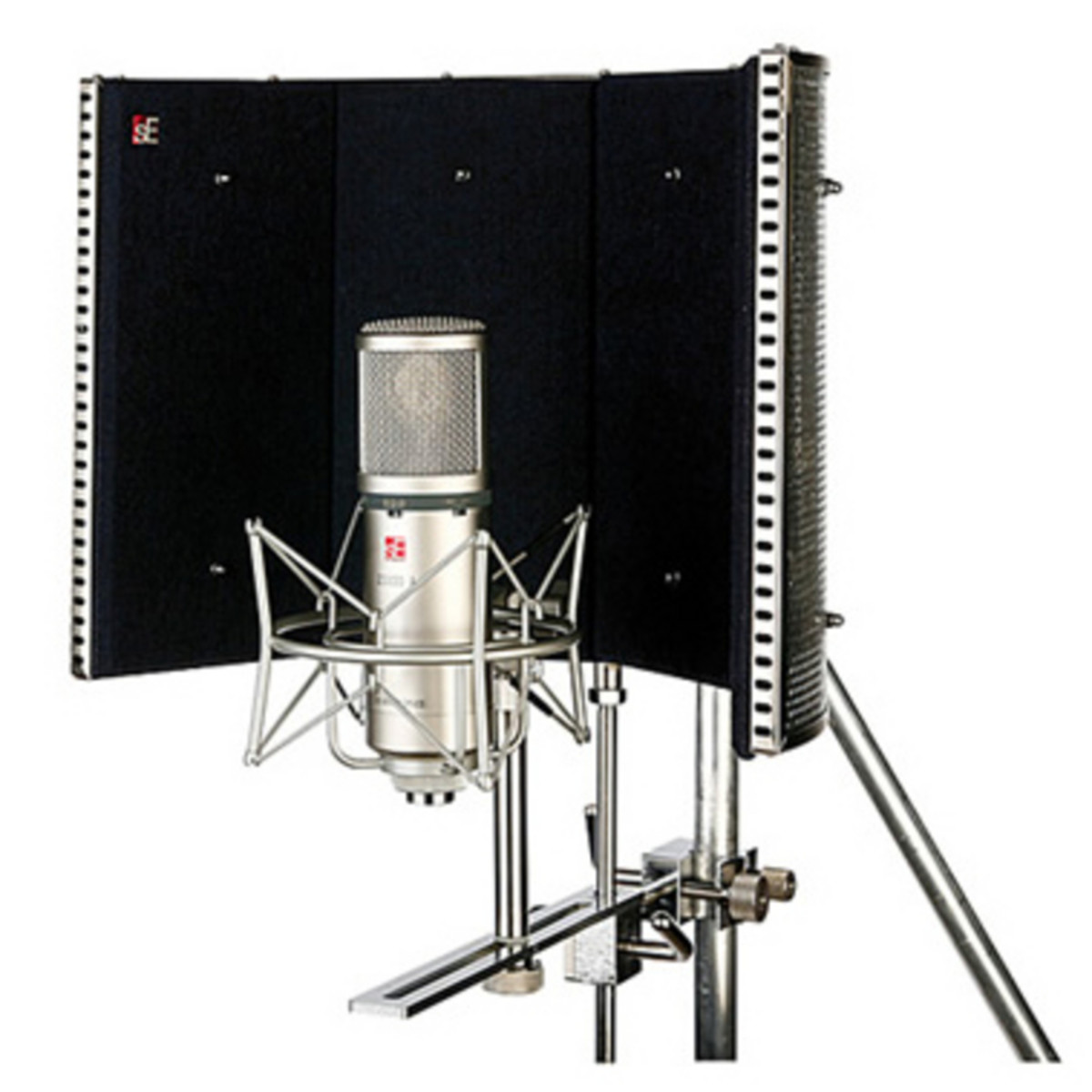 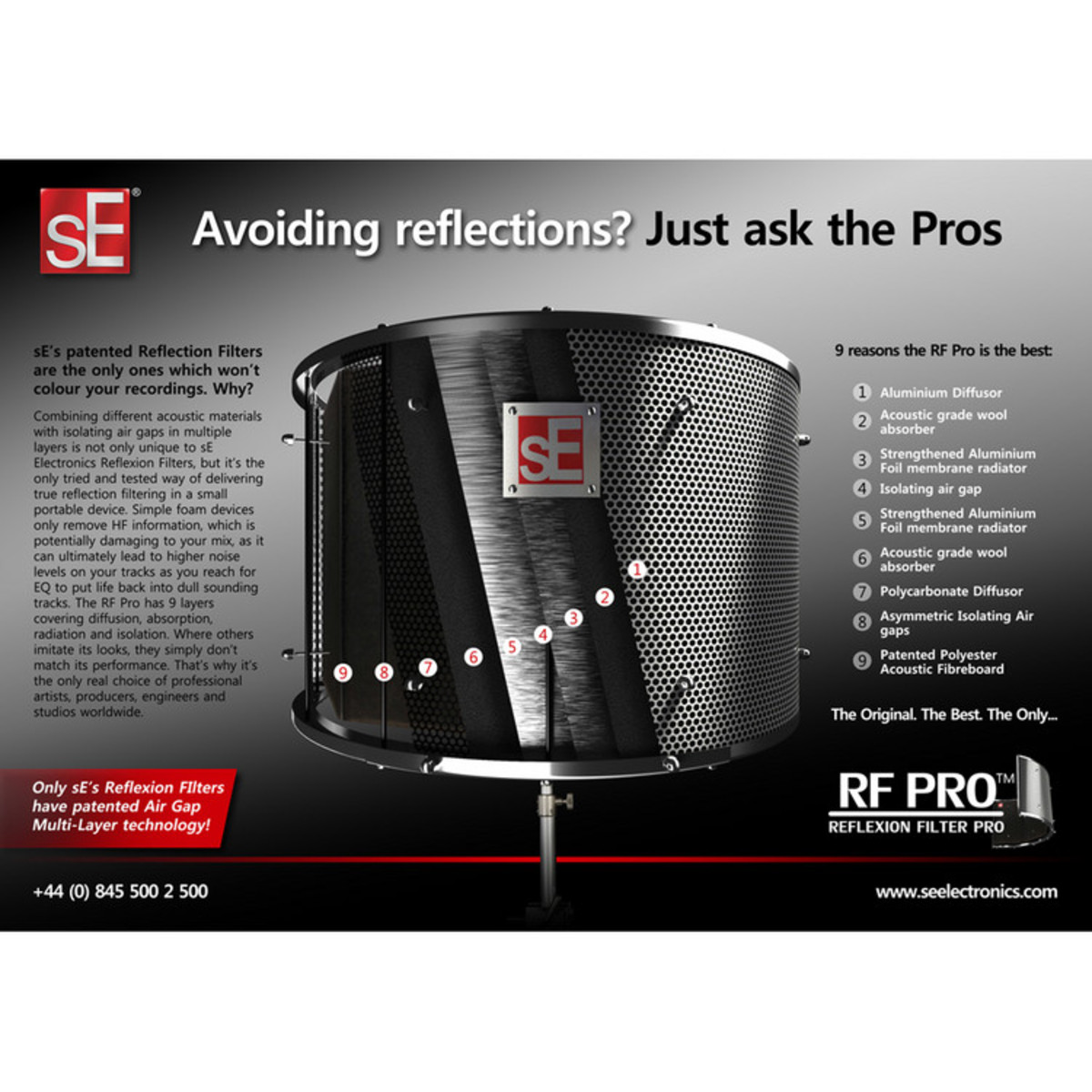 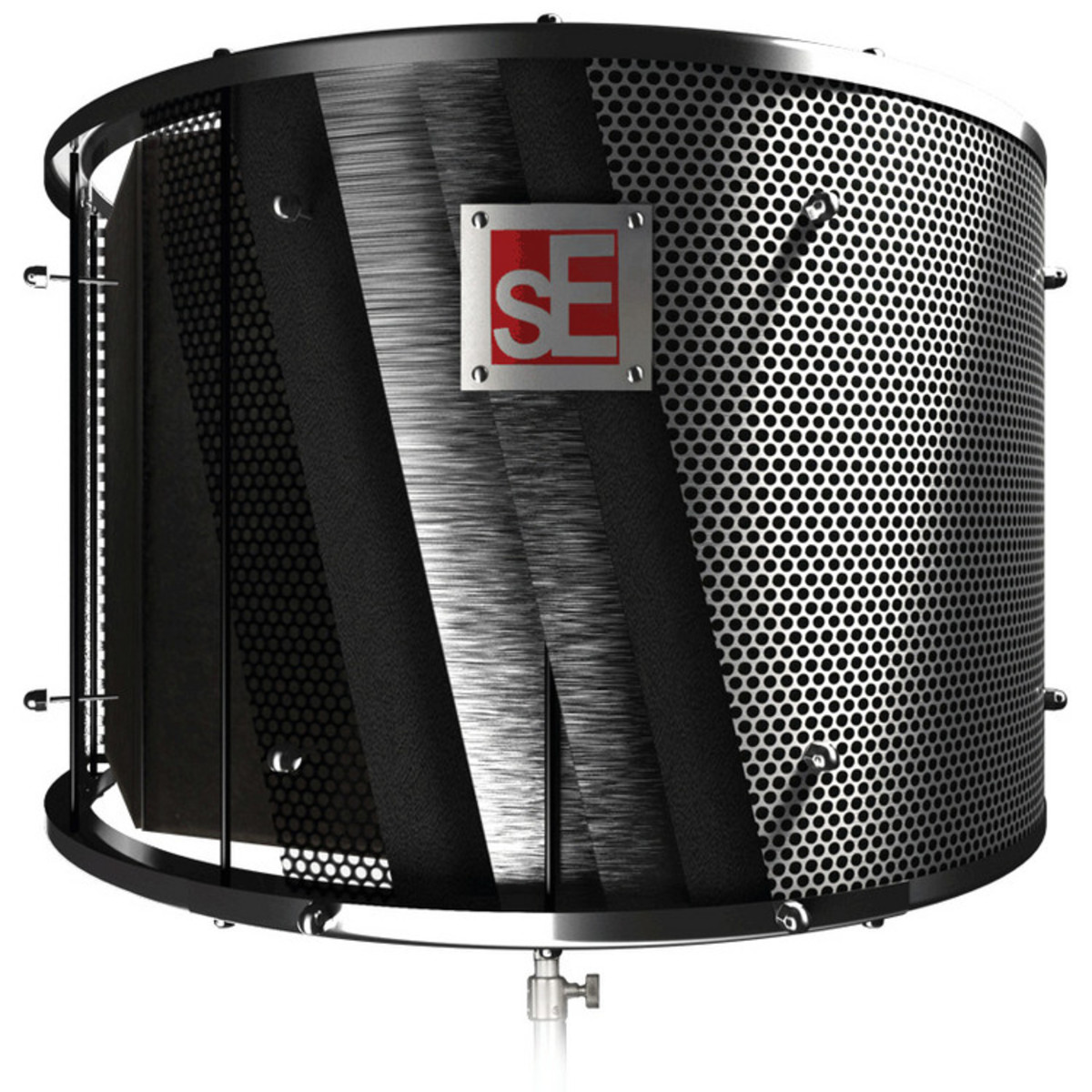 $204.00excluding VAT
4 in stockDelivery Information
Item in stock and available for dispatch

The sE Electronics Reflexion Filter Pro is the original and best portable acoustic screen. It is a patented device and the only one of its type that has a multi layer design designed to completely reduce room ambience when recording. It can be positioned behind any microphone by means of the variable-position stand clamp assembly which is included with the product and attaches to the microphone stand.

The Reflexion Filter Pro helps in obtaining a 'dry' vocal or instrument recording, and is useful in studios without proper acoustic treatment or when recording takes in control rooms, where the performer has to operate the recording device, or in rehearsal studios.

The Reflexion Filter Pro has six main layers. A strong layer of punched aluminium diffuses sound waves, passing them through to a layer of absorptive wool. A layer of aluminium foil then helps to dissipate energy and break up the lower frequency wave-forms before they hit an air space kept open by rods that pass through the various layers. The air gap acts as an acoustic barrier before the sound waves pass to a further layer of wool and an outer punched aluminium wall.

Four formed pieces of state-of-the-art specialist acoustic absorptive material are attached via the extended separation rods, further absorbing and diffusing the sound waves. The flat panels also randomise any reflections back from the surface of the filter, rather than concentrating them onto the mic as with a semi-circular filter.

How Does It Work?

The various layers of the sE Reflexion Filter Pro both absorb and diffuse the sound waves so progressively less of the original source acoustic energy passes through each layer. This reduces the amount of energy hitting untreated walls and surfaces so there's less or the original source reflected back as unwanted room ambience to the mic. The shape and size of the Reflexion Filter Pro have been carefully designed to maximise absorption whilst keep colouration down to only 1dB leaving the microphone's polar pattern unaffected.

"I recently used the sE Reflexion Filter while recording vocals at an artists house and it was the ideal solution. It's like you don't need a studio anymore. If I'm ever recording in a less-than-ideal acoustic I can just throw the RF up and all the problems are gone - I've got a clean and clear sound as if I was recording somewhere considerably more expensive." Don Morley, Sound Engineer

"We tried the sE Instrument Reflexion Filters in rehearsals and they seem to work so we bought four. When we did the first shows, some small warm up gigs in tiny clubs, they came into their own.The spill was dramatically reduced and the sound more focused. They exceeded my expectations." Jon Burton, Sound Engineer

"sE's Reflexion Filters have been invaluable for conquering spill problems between mics. I  have both the IRF and the RF PRO on drum, guitar and piano mics, which massively cut down the bleed between the different sources." Rik Simpson, Producer - Coldplay, Jay-Z, Kasabian, Athlete, Lamb.

"The Reflexion Filter is a great idea, so simple but so useful. I use it on vocals, acoustic guitars, electric guitars, percussion, hi-hat overdubs. I use the RF PRO all the time on vocals and acoustic guitars. It really helps to control what the mic receives, especially in project studios - a life saver!" Rob Harris, Artist/Writer - Jamiroquai.

"I've used the RF PRO for EVERY vocal session I've ever done since first getting my hands on it. It immediately became a staple in our studio." Troy Antunes, Producer - The Backstreet Boys, Justin Timberlake, NSYNC, Britney Spears, Gloria Estefan.

"I use the sE Relexion Filter in my vocal booth. Generally so you can see the vocalist you have them standing not very far from a glass window and, of course, you are getting bouncing sibilance back from the window into the mic and it can give you really blurry s's and t's. The Reflexion Filter is invaluable in situations where it can moderate difficult acoustics...you can make the most of acoustic guitar and vocal recording when the room is too 'live'. I have also used the RF to control hi-hat spill onto a snare mic. Such a simple piece of kit but so useful." Chris Porter, Producer - George Michael, Take That, Chris De Burgh, Gary Barlow.

"The sE Reflexion Filter is, a studio must-have - it keeps the vocals tight & under control, without affecting the frequency response of the mic at all, in almost any recording environment... it's magic!" Andy Bradfield, Producer - The XX (Great Gatsby), Above & Beyond, Craig Armstrong, Rufus Wainwright