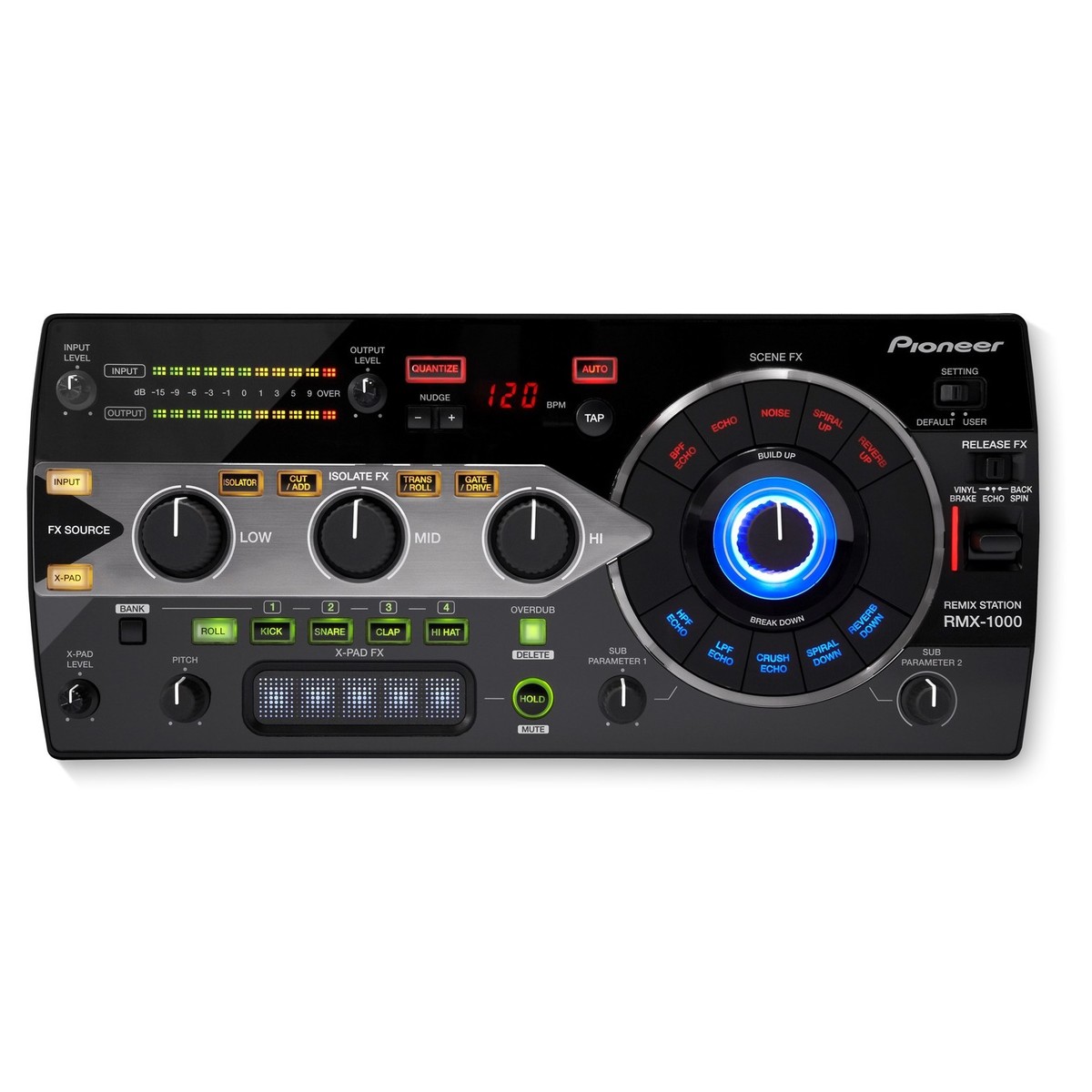 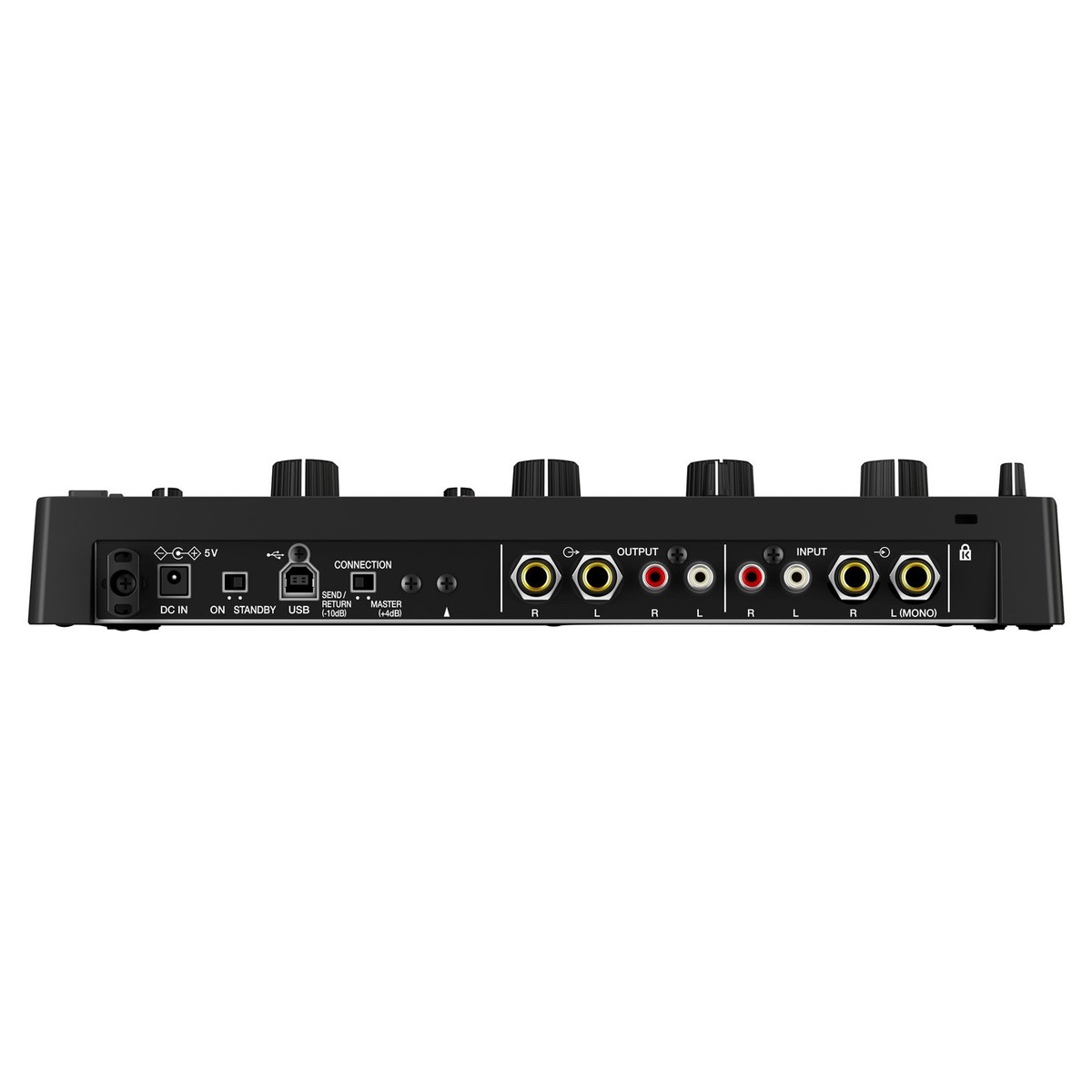 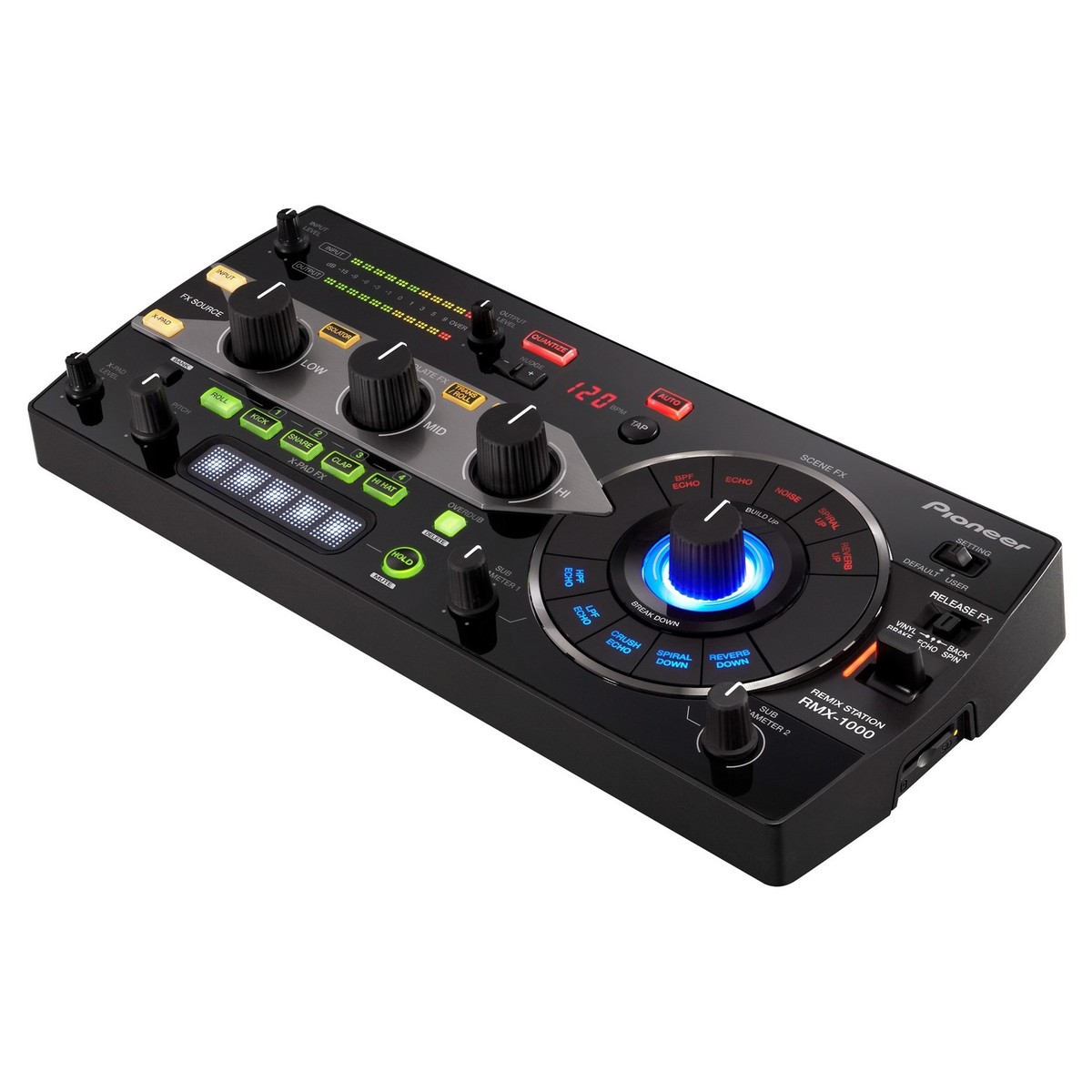 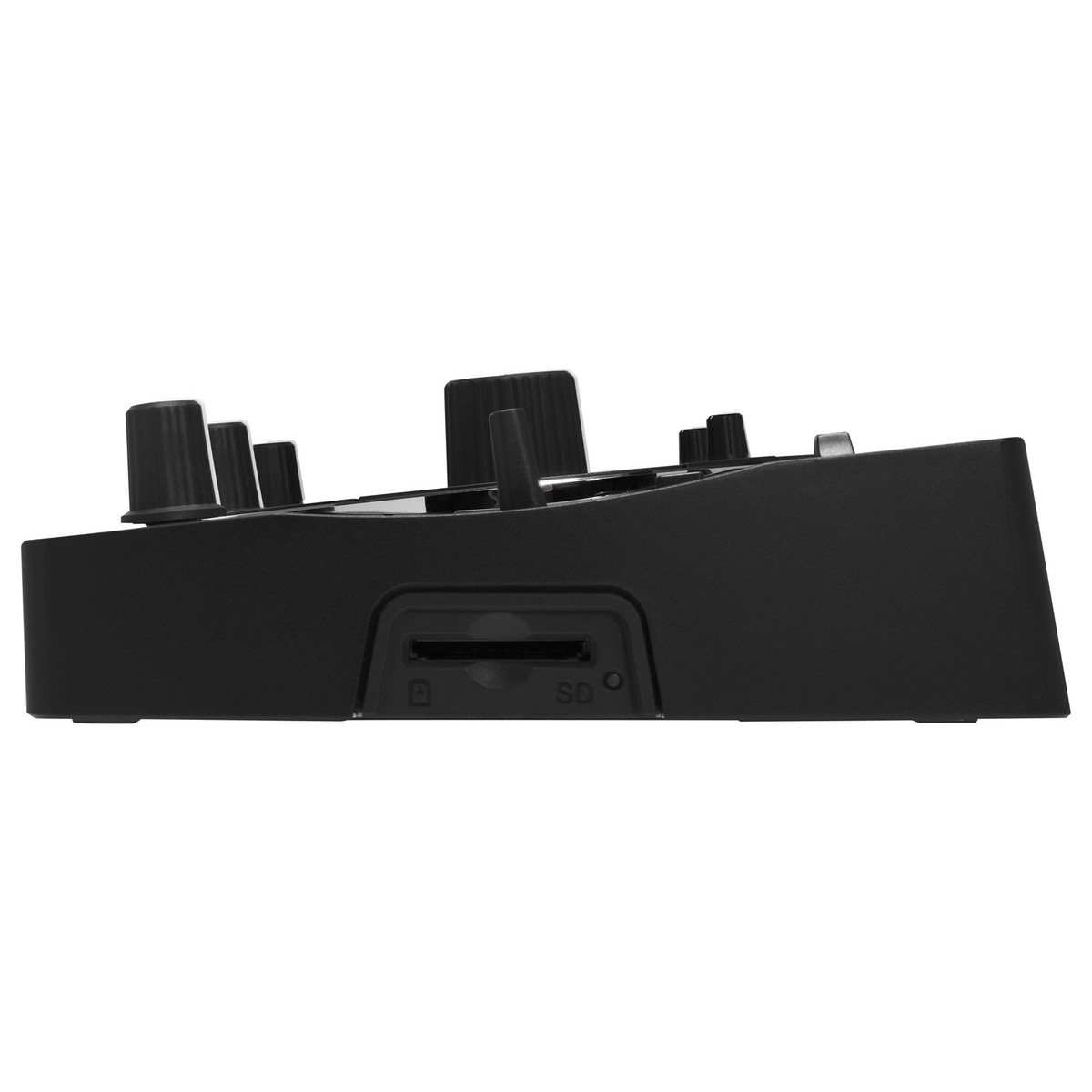 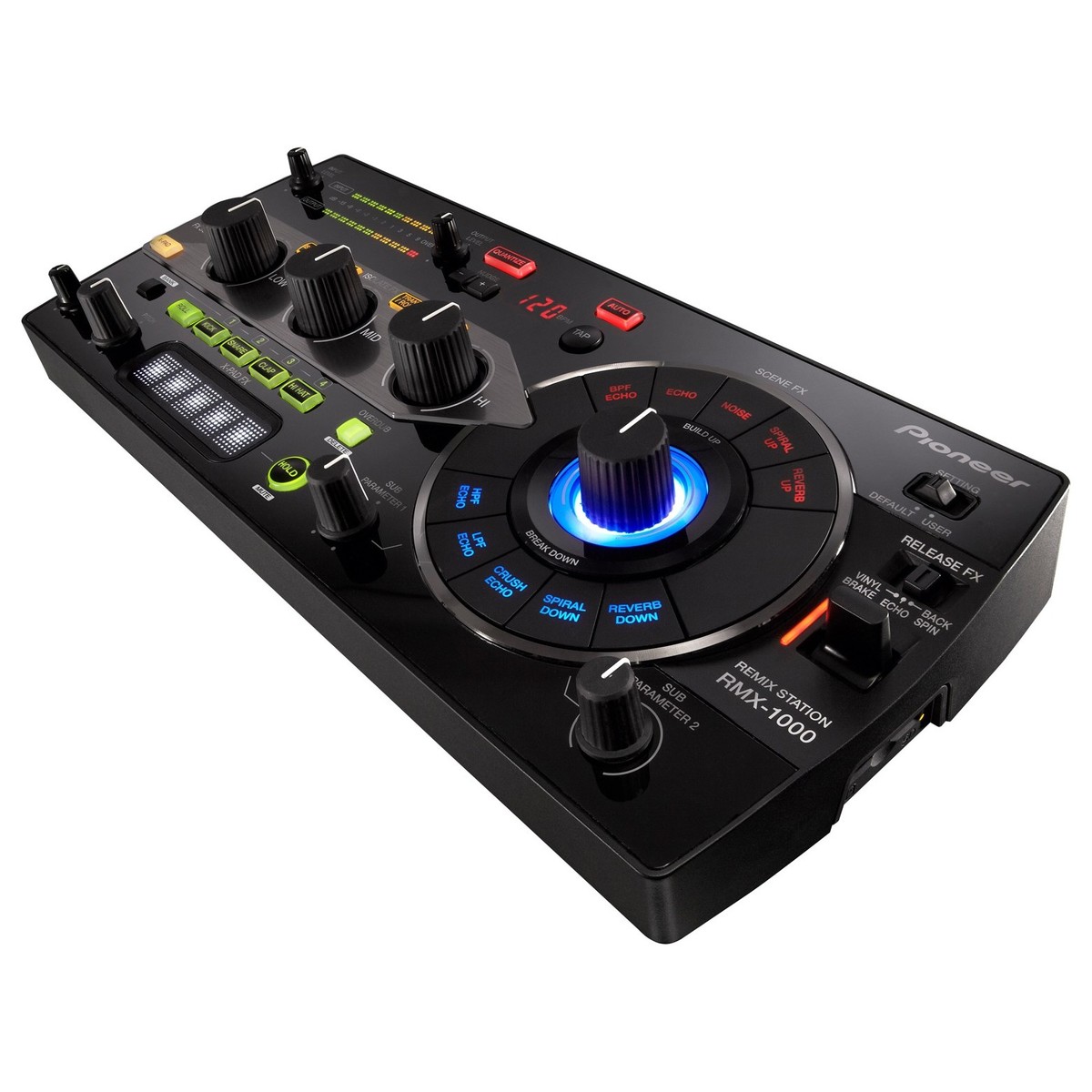 Back in full effect. The compact and portable Pioneer RMX-1000 allows users free control of musical developments with intuitive operation.

Four sections of the device are arranged with easy-to-control knobs and buttons that control multiple effect parameters. By combining the effects from each section, wider arrangements with greater individuality can be performed with.

Take effect and take to the stage

The Pioneer RMX-1000 serves up all the possibilities of studio effects and beatboxes, with the added physicality of pro-DJ equipment. Intuitive performance interfaces from Pioneer's flagship mixers and effectors - such as the DJM-2000's Isolator FX, the DJM-900nexus's X-Pad and the EFX-1000's multiple FX chaining - have been evolved and brought together into one unit.

Simplifying these concepts even further, the RMX-1000 uses intuitive DJ controls to manipulate several parameters in macro. Each effect has been designed to work in a totally unique way with the interface, for results previously only possible with hours of studio automation or robot-like performance skills.

While the unit is incredibly simple to operate, DJs can still create a totally unique sound with Pioneer's remixbox™ editing software. remixbox™ allows DJs to completely customise the RMX-1000 hardware to their own performance style and load it up with their own banks of samples.

And, by saving their settings to an SD card, DJs can effectively take their own personalised DJ rig with them wherever they perform. Plus, Pioneer plans to upload internationally renowned DJs' settings and samples to its website so DJs can give themselves a head start.

Using the RMX-1000 as a USB controller for the included RMX-1000 VST / AU plug-ins gives DJs the same hands-on feel they get with studio DJ mixes, to breathe new life into studio productions and save them from hours of editing.

In the SCENE FX section, users can choose between five BUILD UP effects and five BREAK DOWN effects. The BUILD UP effects, consisting of BPF ECHO, ECHO, NOISE, SPIRAL UP and REVERB UP, add sounds, while BREAK DOWN effects, consisting of HPF ECHO, LPF ECHO, CRUSH ECHO, SPIRAL DOWN and REVERB DOWN, cut sounds. A large knob increases or decreases the parameter of effects chosen by simply turning the knob. Two sub-parameters knobs are also available for additional changes to the effects being produced.

The ISOLATE FX section, consisting of three individual knobs, processes the low, mid and high frequency bands of the music passing through. The section is loaded with three effects in addition to an Isolator, providing rhythm patterns, timbre, etc., letting users freely modify the output for the HI/MID/LOW frequency bands. In addition to the Isolator, three additional effects in the section are available including CUT/ADD, TRANS/ROLL and GATE/DRIVE.

The device features a touchpad section called the X-PAD FX that enables users to develop and add new sounds not found in the original music. In addition to its four built-in effects, KICK, SNARE, CLAP and HI HAT, other sound effects edited in Pioneer's remixbox software can be inserted using an SD card (not included) during DJ play.

The system also includes a RELEASE FX lever that eliminates the current music playing and leaves only the sound effects. RELEASE FX can also be used to create the opposite effect: When the lever is released, all section effects are eliminated while the original music continues to play. Three types of RELEASE FX are available including VINYL BRAKE, ECHO, and BACK SPIN.

The included remixbox software allows the user to customize various settings of the RMX-1000 on a computer, changing parameters such as volume output and values for different sections of the device. The customized settings can then be transferred using an SD card for use with other RMX-1000s.

Using the included RMX-1000 Plug-in VST/AU plug-in software, users can create the same type of music production and effects while DJing on a computer. In addition, connecting the device to a computer enables it to act as a controller for music production.