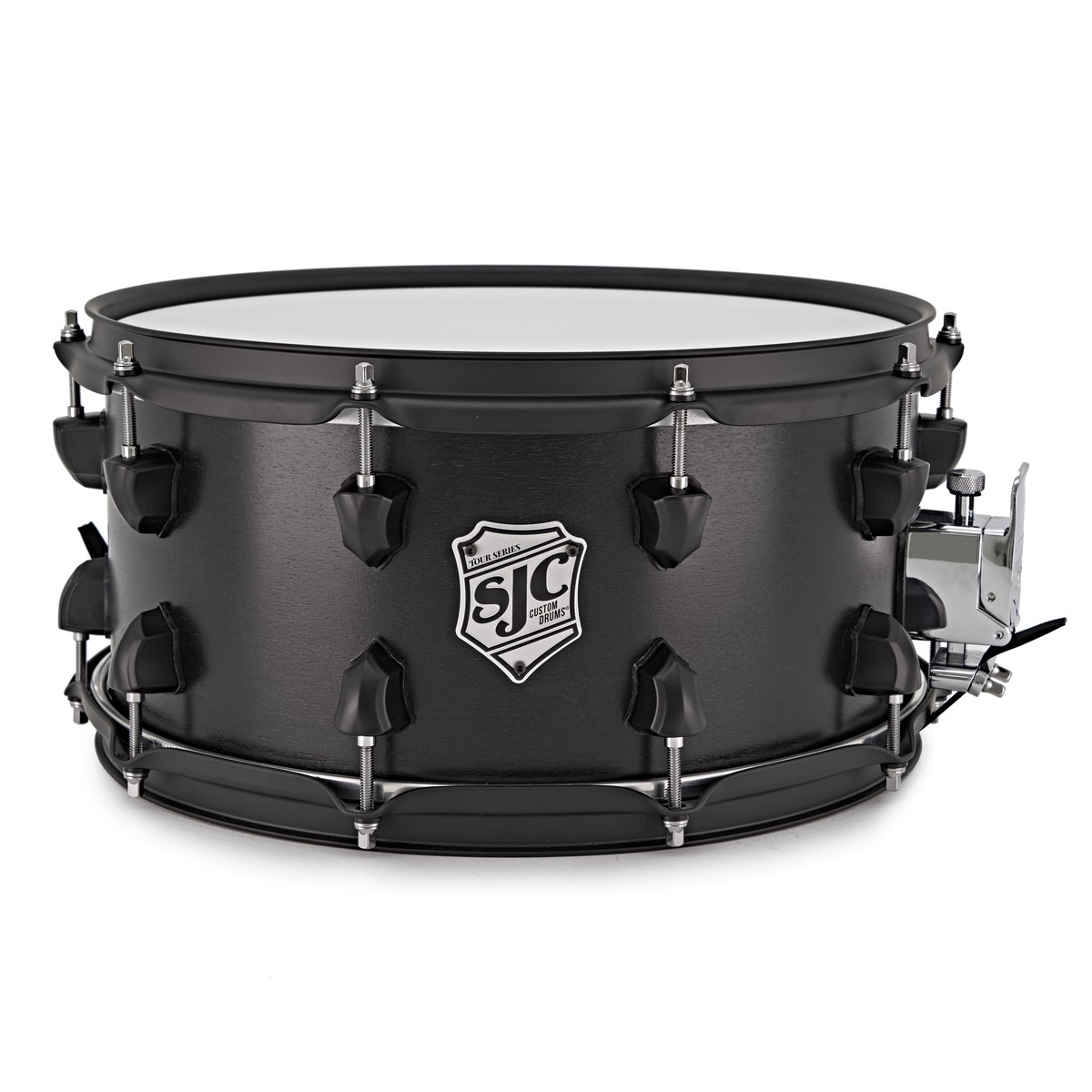 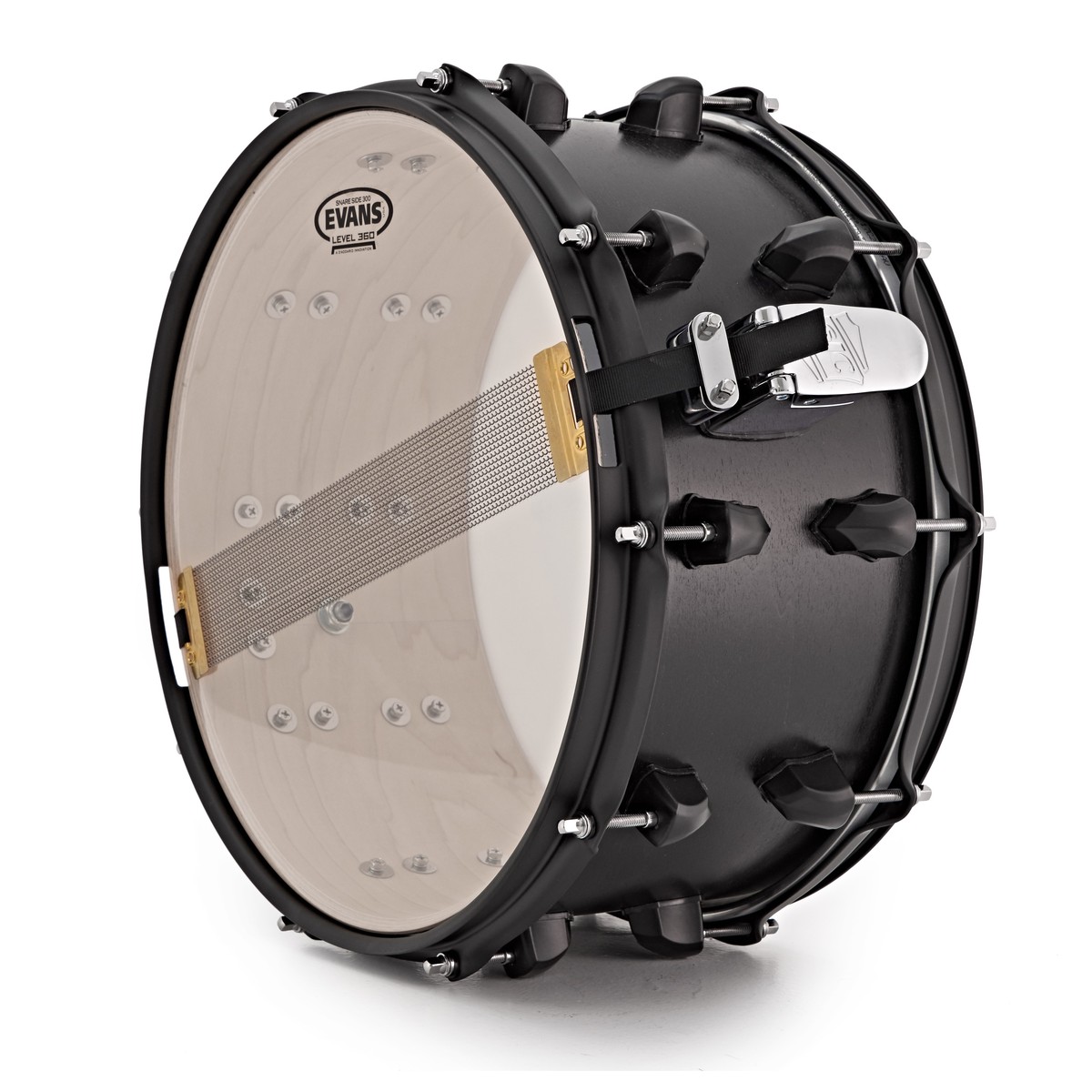 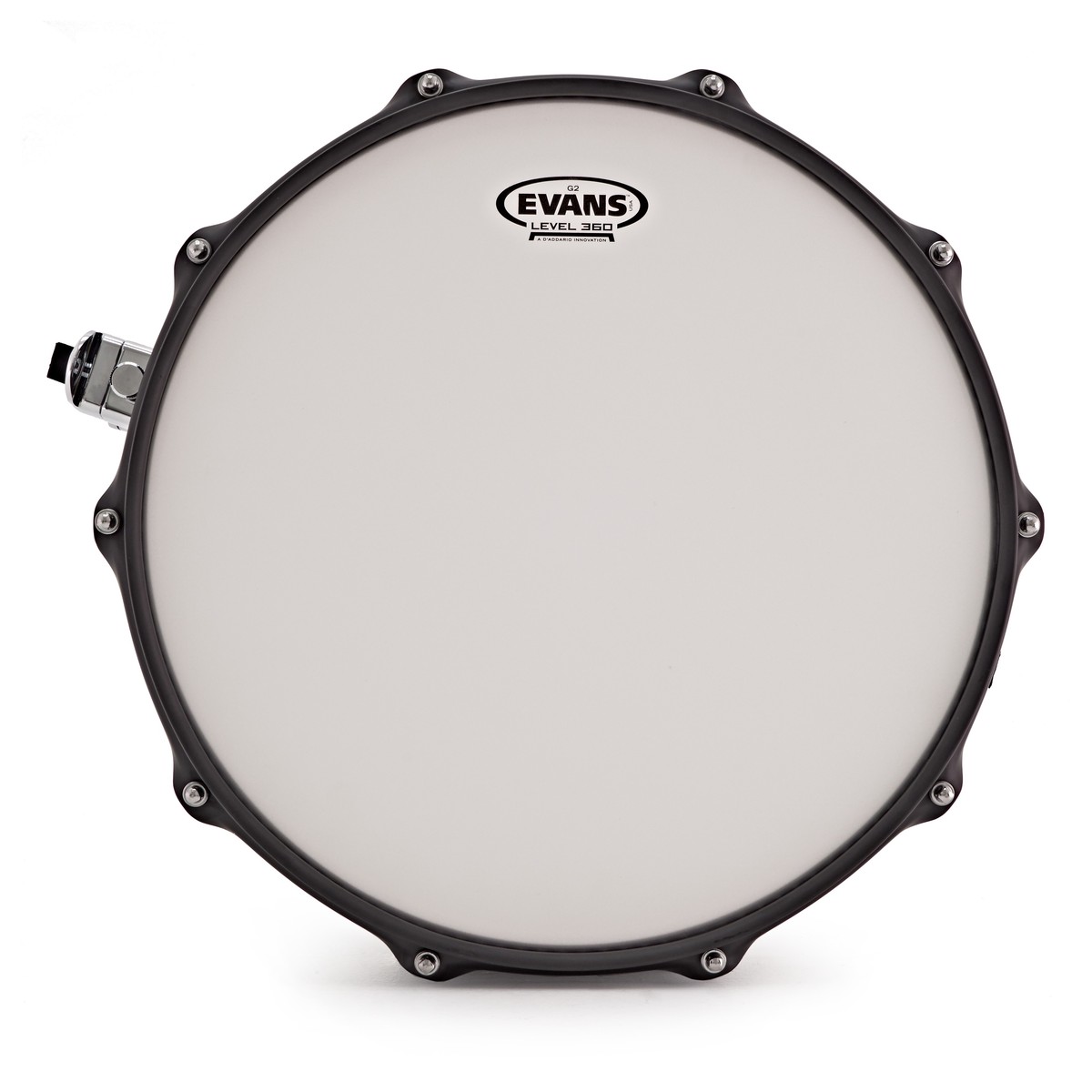 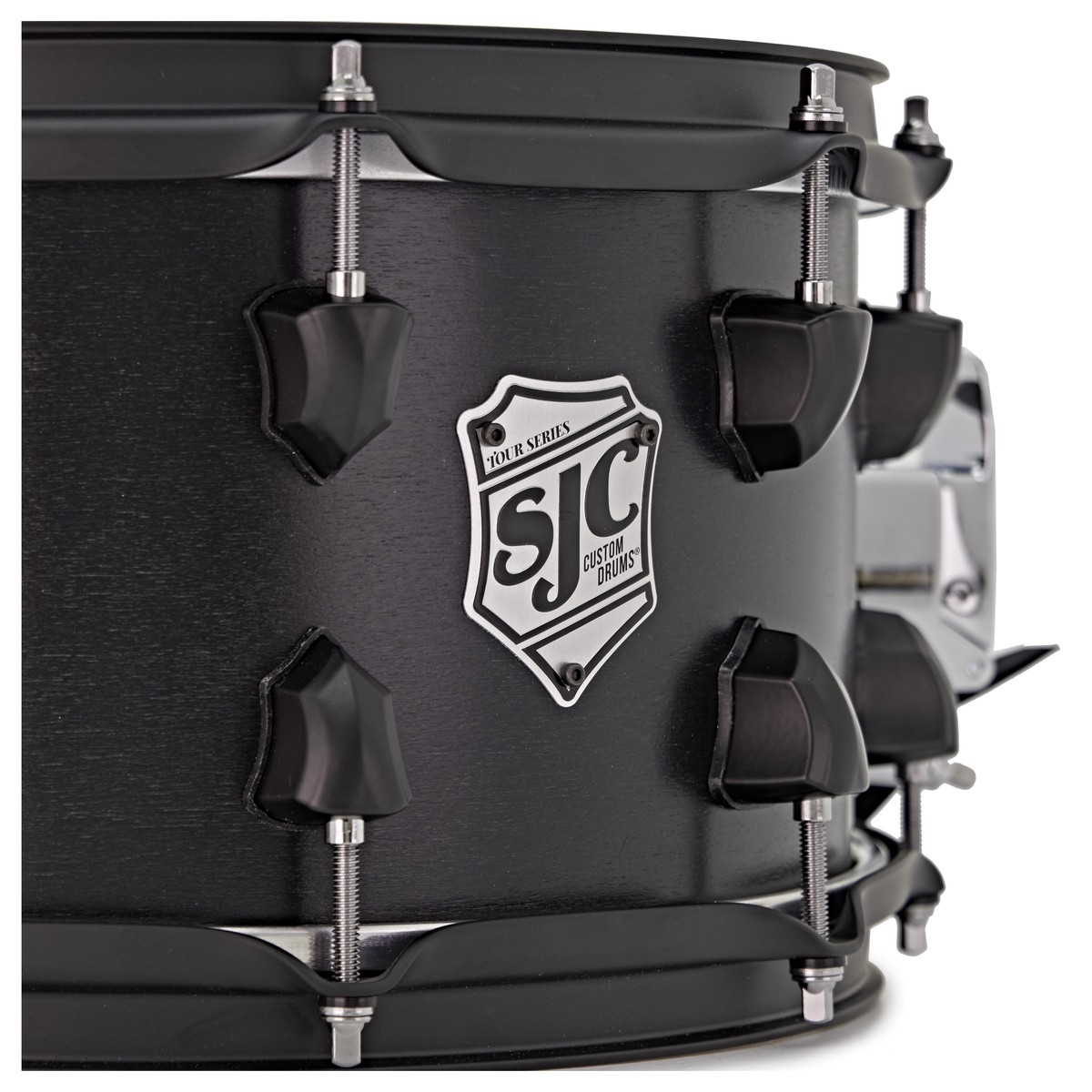 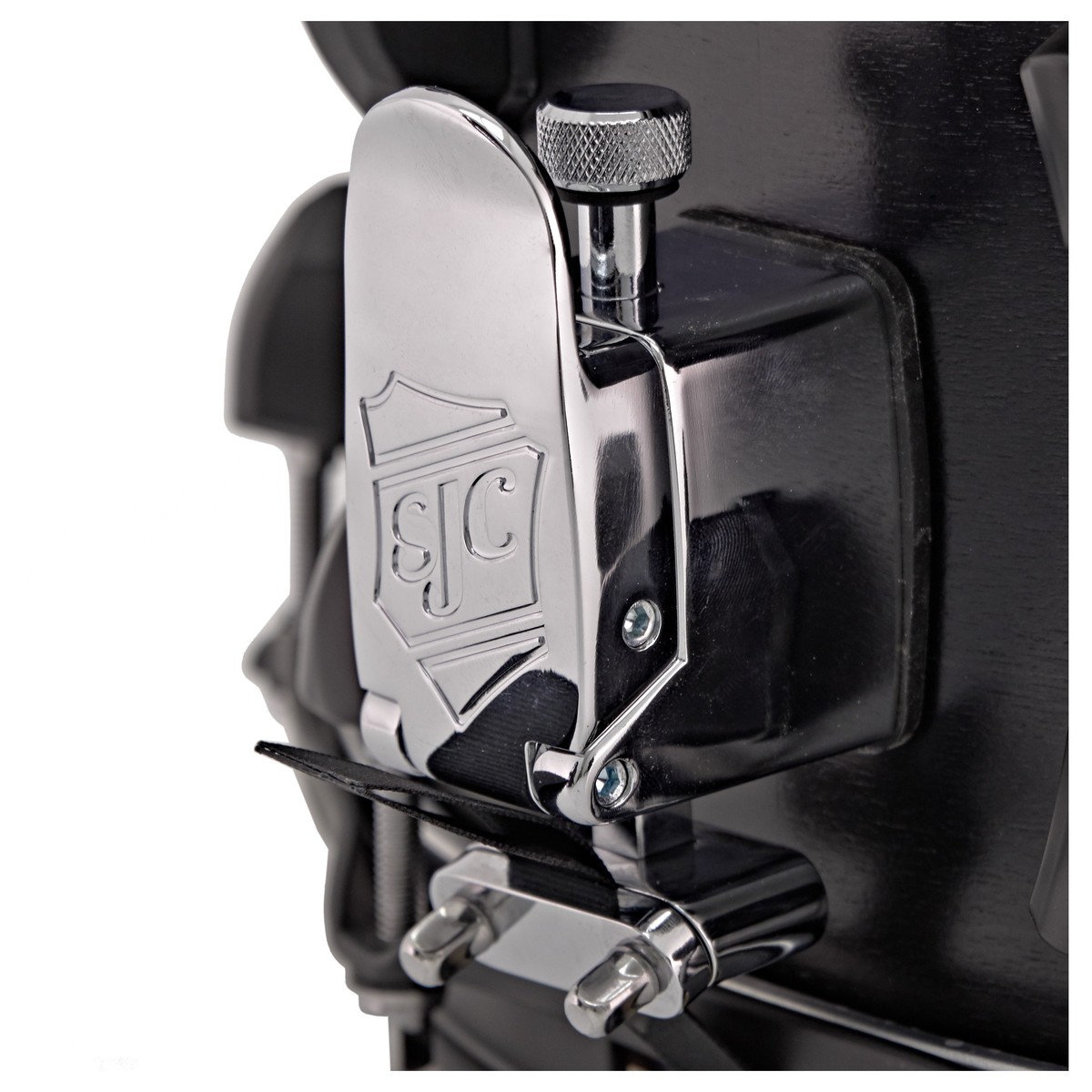 The SJC Drums Tour Series 14x7 Snare Drum, Black Satin Stain with Black hardware brings classic visual style and formidable tone and combines them into one comprehensive package. With a Maple shell the player can expect warm and resonant tone, that cuts right through the mix adding to a well balanced and overall solid sound. The SJC Tour series of drums and snares has become a firm favourite with drummers worldwide thanks to the combination of high-quality American hand manufacturer and unbeatable tone.

Please note: When you buy an SJC snare drum from Gear4music you will make substantial savings against the cost of direct shipping from the USA, and EU import duty charges. For more information please contact us

SJC 45 Hand cut bearing edges ensure that shells resonate and consistently stay in tune adding more sustain with an added brightness.In addition to this, the standard SJC snare wires provide a great mix of shell tone and snare wire snap, further assisting the definition of the snares dynamic sound. The shield lugs used on the Club Series Snare are durable and offer great stability and adjustability. A new, quick-drop throw featured on the snare uses a simple and lateral style throw off that makes practicality and easy operation priority.

Every drum is individually tuned and played to ensure that they are ready to be played upon arrival, meaning that SJC'S astonishing tone is at the players immediate disposal.

With a great sound also comes a great aesthetic. The distinctive SJC badge located on the shell proudly mark the snare as a product of high quality manufacturing and craftsmanship. Built in Massachusetts by the very same craftsmen who create the innovative custom kits The SJC Tour Series retains ultimate sound quality as well as a classic appearance. A sleek black satin stained finish upon Maple gives the snare a vintage look and feel whilst maintaining its distinctive warm smooth and versatile tone.

With humble beginnings in Mike and Scott Ciprari's (SJC) Grandmother's basement, SJC has since developed into one of the world's leading drum manufacturers and suppliers.In the beginning the brothers were determined to pioneer the sound of a generation, tirelessly seeking to improve themselves and their drum kits until they had reached a state of perfection. As the brothers skills progressed and they got better at building, they figured it a good idea to get some of their friends to play their kits and start to spread the word. Bands such as A Wilhelm Scream and Strike Anywhere were some of the few endorsements from the brothers. SJC's turning point came when the musical sensation 'Panic! At the Disco' played the MTV music awards in 2006. This pivotal moment enabled the brand to branch out and endorse a variety of bigger and more diverse bands like Hawthorne Heights, Aiden and Cobra Starship. Expanding their already impressive artist roster, SJC began to reach unprecedented heights and managed to move out of their grandmothers basement and into a warehouse, enabling SJC to introduce a small number of new dedicated staff .

Embracing the game of innovation, SJC have consistently created drums that produce high quality tone and a distinct character, often to the exact specification of high profile artists. In the last two years SJC has signed drummers Branden Steineckert (Rancid), Cyrus Bolooki (New Found Glory), Zach Lind (Jimmy Eat World) and Tre Cool (Green Day). With all these world renowned artists previously being endorsed by huge international companies, it speaks volumes of SJC for their desire to switch to a custom company.

Always on the cutting edge of innovation, SJC has always focused on making the drummer the focal point of any performance.With a virtually endless list of custom options, SJC prioritizes the drummer's specific requirements whilst never compromising their classic and unique sound. With an ever expanding list of big names upon their roster, SJC has been a consistent choice for many renowned drummers the world over, emphasizing their commitment to quality and sound.

"I've played on literally every brand of US drums out there, and I've finally found my home. I've been looking from drums like these my whole life. True American hot rod custom kits. From the look and sound to the service and attention, it's good to now be part of the SJC family." Tré Cool - Green Day

"I have no clue how I just barely started playing these drums, they sound incredible! Not sure what rock i was living under. I can't express how proud I am to now be part of SJC and get to play these amazing drums every night." Dave Joyal

"Me being real and honest: I am so proud to play SJC Drums. They have treated me so well since I started playing them 5 years ago. Thank you!" Rian Dawson- All Time Low

"The snare drum, despite its considerable depth, is amazingly responsive to softer strokes and has a fair snap when coaxed. Its thick 10-ply maple shell produces a warm tonality, particularly when playing rim-shots, which is helped by its elongated body." "The tour series ticks all the right boxes, offering a highly usable kit across a wide cross-section of genres." Rhythm Magazine