The US rockers performed a set of their biggest hits - including 'Numb', 'Faint', 'Crawling' and 'One Step Closer' - before surprising fans with their version of the soul singer's huge hit during their encore at Camden's Roundhouse in London.

Before they performed the track lead vocalist Chester Bennington teased the audience, saying: "We're going to do something really special for you guys, this is something we don't usually do. We're going to play a song by a local artist."

The band's version of Adele's UK and US number one single saw the band stripped back, with Chester singing and multi instrumentalist Mike Shinoda playing the piano.

The hit was part of a five-song encore that saw the band - who are also made up of drummer Rob Bourdon, lead guitarist Brad Delson, bassist Dave Farrell and DJ Joe Hahn - close the night with energetic performances of their 2001 single 'In The End' and 2007's 'Bleed It Out'.

Chester told the crowd: "It feels good to be down here with a bunch of people who really want to f***ing be here."

They band opened with 'The Requiem' before launching into 'Papercut' and also performed 'No More Sorrow' and 'Breaking the Habit' during their set.

The iTunes festival runs throughout July and will include shows from artists including Beady Eye, Friendly Fires and Bruno Mars.

'When They Come for Me'

'Waiting for the End'

'Burning in the Skies'

'Rolling in the Deep' (Adele cover)

At the 2018 Brit Awards Ed Sheeran teamed up with Ashton Miranda and the Roland LX-17 Digital Piano. Now Roland is giving away the same piano - worth £4399 and signed by Ed and Ashton!

Through a collaboration with Martin, Sheeran's latest signature model features artwork from his latest album '÷' and has been built to his exact specifications.

An icon who helped propel the rock 'n' roll movement to new and unprecedented heights. Chucky Berry is praised by many as a founding father of modern music.

Y and T Guitarist Joey Alves Passes Away at 63

Founding guitarist of legendary LA band Y and T Joey Alves passes away due to complications relating to Ulcerative Colitis. Documentary on soon to follow.

KISS Are To Release Their Branded Soft Drink- Destroyer Cola

In a recent unconfirmed report, frontman of famous rock and roll outfit Guns N' Roses is said to be heading into the studio with Australian rock veterans AC/DC 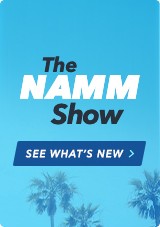