Electric violin group FUSE have revealed that their music achieves what many people had previously thought was impossible.

The duo are currently gearing up to record their debut album on the Edel label, which features electric violin interpretations of famous rock songs.

Joan Jett's 1982 classic I Love Rock and Roll, which was later covered by Britney Spears in 2002, is among the well-known songs on the LP.

Linzi Stoppard, one-half of the band, said: "No-one thought that what we do was even possible.

"Everything you hear is violins."

She revealed that they chose material from huge stadium acts as they want to evoke a similar sense of size and power in their music.

Stoppard said the style they use is more akin to that of an electric guitar player, although with more electricity and soul.

"We specialise in blowing away people's preconceptions," she added.

The album also includes a number of special guests, including Pink Floyd drummer Nick Mason and Status Quo's electric guitar player Francis Rossi, who appears on a new version of the band's 1974 hit single Down Down.

Universal Audio Announces Its First Ever Pedals – The UAFX Series!

Blackstar has unveiled the new versions of their practice amps - and we’re impressed. The Blackstar Core ID:Core V3 models have been packed with new features that will help improve beginner performance.

NAMM 2021 Rumours - Has The NAMM Show Been Cancelled?

Unfortunately, yes. This year The NAMM Show has been cancelled. In its place will be an online event called the NAMM Believe In Music Week. We're still expecting to see lots of new products though, find out more...

It's that time of the year again! Ibanez have just announced their brand-new, exciting guitar range for 2021. We're giving you our rundown of all the highly anticipated launches and what you can expect from Ibanez this year…

Get on the right track with M-Audio’s Crystal technology in the M-Audio M-Track Solo and Duo interfaces.

There are four competitions closing on Monday 21st December. Enter now to win!

New Fender 2021 confirmed – Here’s what to look out for

Fender has just released their first incredible batch of guitars for 2021. Expect celebrations, exciting signatures and next level specs.

5 reasons to get excited about the Jackson 2021 MJ Series

Jackson dive headfirst into 2021 with the launch of their new MJ (Made in Japan) Series of precision-made axes.

Gretsch has announced their 2021 line up and they're treating us to a new take on some familiar models.

RANE ONE - The New Number ONE DJ Controller

The new RANE ONE is a premium Motorised DJ Controller. With motorised platters, it offers the true feeling of vinyl for the most immersive digital DJ experience imaginable.

Once again, the doctors of shred at EVH have been hard at work to bring their latest 5150 and Wolfgang models to fruition. Here we'll take a look at what makes these new models one of the best releases this year.

Charvel drops an incredible line of mesmerising guitars including Pro Mod San Dimas basses and a 6-stringed version of the Angel Vivaldi signature. With an eclectic mix of familiar models too, you'll want to get your hands on one of these axes. 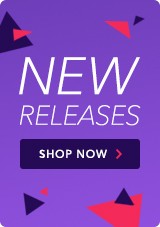