CITES and Rosewood on Guitars - What's The Story?/news/article/CITES-and-Rosewood-on-Guitars-Whats-The-Story/7JN/2018-06-25

CITES and Rosewood on Guitars - What's The Story?

CITES and Rosewood on Guitars - What's The Story?

Rosewood is now under the protection of CITES laws and this is having a huge impact in the guitar industry. Find out what this means for you.

If you're a guitarist, you may have noticed the recent trend in new fingerboard woods replacing traditional rosewood designs. This is because rosewood, alongside other species, is now a protected wood under CITES laws (the Convention on International Trade in Endangered Species of Wild Fauna & Flora). CITES means that many guitar manufacturers are looking to use alternate species of tonewood and, in some cases, man-made materials for their guitars. CITES also affects other species of wood including bubinga (commonly used in Ibanez necks), cocobolo, African blackwood, kingwood, grenadillo, and more. So, what does this mean for the future instruments that you may be looking to purchase?

Rosewood is one of the most common illegally-traded woods, especially in the furniture industry. The wood was brought under CITES regulation in 2017 to ensure that it is procurred from ethical and sustainable sources.

While the guitar industry uses significantly less rosewood than the furniture industry, rosewood is still one of the most prolific tonewoods used in guitar production. If you've ever seen or played a guitar with a dark-coloured fingerboard, odds are that it will have been constructed from rosewood. Rosewood is also used for acoustic guitar bodies, in particular, for the backs of acoustic and classical guitars (Brazilian rosewood has a stunning grain pattern that is shown off on high-end instruments).

With the new CITES Appendix II restrictions on rosewood, both an import and an export licence is required to trade it across international borders. This means that, if you intend to take rosewood across any border, it requires extra paperwork and added fees. While it is still possible to buy a rosewood-equipped guitar today, the trade limitations and added paperwork means that these instruments will most likely be at the higher end of the market. 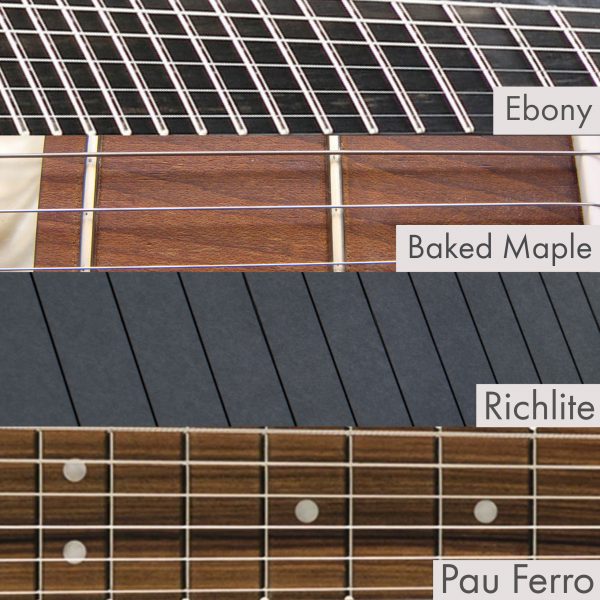 Rosewood was the most common dark-coloured fingerboard wood until 2017. It is renowned for its smooth playability, clear top-end and warm character. Ebony has long been a common alternative wood to rosewood - its fast attack, dense grain and strong resonance is ideal for metal and hard rock players. A more recent alternative to rosewood is pau ferro. Pau ferro features almost identical tonal characteristics to rosewood which makes it a perfect replacement and one which you'll find throughout the Fender Mexican line.

Other alternatives include laurel, ovangkol, jatoba, walnut, baked maple (roasted at a high temperature for reduced impurities, darker hue, and consistent structure), and even some man-made materials such as richlite (a composite used by Gibson with arguably better material and tonal properties than any other natural wood).

As a guitar buyer, the latest changes to CITES Appendix II means that it will be more common to see rosewood being restricted to use on higher-end guitars, and feature less on affordable and mid-range instruments. However, the new breeds of tonewoods offer similar characteristics that guitarists commonly look for in a rosewood fingerboard, including a warm tone and tight articulation.

Despite the fact that rosewood is so prolific in its use as a fingerboard material, this doesn't necessarily mean it is the superior choice. In fact, many other tonewoods offer similar, if not better, tones and an alternative visual appeal that should not detract future buyers. For example, ebony was always considered a premium fingerboard upgrade due to its dense grain and dark hue. Pau ferro, conversely, offers a lighter grain pattern making a refreshing alternative to rosewood. If guitarists can look beyond the traditional look and sound of rosewood, they may be pleasantly surprised by what the alternatives can offer.

Can I Sell my Rosewood-Equipped Guitar?

Can I travel with my guitar?

Yes - providing you have less than 10KG of rosewood, you are perfectly within your rights to travel with a rosewood-equipped guitar. However, you must be travelling with the guitar on your person (not sending it separately).

For more information about CITES, head to http://www.cites.org

Competition - Win a set of Campfire Audio Earphones! Two Prizes Up For Grabs

In collaboration with Campfire Audio, you will have the chance to win a free set of their earphones! Two prizes are available. Enter before 7th October for your shot at winning.

Having just signed to Ed Sheeran’s record label, Maisie Peters is rocketing into music stardom. But what’s the secret behind the sound to this YouTube sensation?

Raise your speaker game with Yamaha

As we approach a party-filled summer, make sure your events hit the right note with Yamaha’s range of top-class PA speakers.

The story behind Boss's legendary Waza Craft Division. Where 'art and craft' is distilled into premium guitar products.

Even for the most seasoned of players, investing in an expensive guitar can be a daunting process. So, we've written a handy guide to give you an idea on what features you can expect when splashing the cash on an acoustic masterpiece.

HEADRUSH MX5 - A Professional Powerhouse in the Palm of your Hand

The HeadRush MX5: the most compact, powerful, and easy to use guitar processor to date...

The RANE SEVENTY A-TRAK Limited Edition Battle Mixer - Designed by the Best, for the Best

RANE collaborates with A-Trak on a signature, limited-edition Battle Mixer.

Akai MPC 2.10 update further reaffirms you can truly stand alone with an MPC